This week, all the loose ends were supposed to be tied up neatly by Mumbai police, but wait, Bihar police dramatically arrived in Mumbai 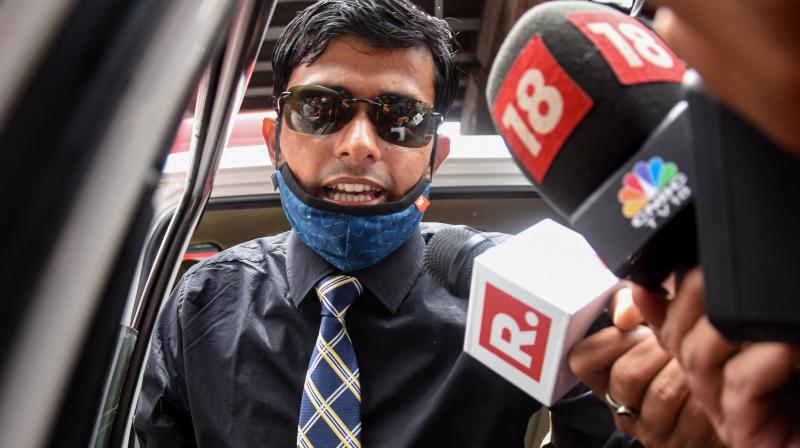 The tragic SSR suicide saga was raging away, with two state governments (Bihar and Maharashtra) battling each other aggressively and publicly, to control investigations and dominate the case. Till -- trumpets and bugles, please -- a monster was introduced. Enter the Dragon: the CBI!

Meanwhile, the main protagonist, 34-year-old actor Sushant Singh Rajput, has been reduced to three letters of the alphabet. And we remain as clueless about his untimely death today as we were when the controversy broke.

This week, all the loose ends were supposed to be tied up neatly by the Mumbai police, but wait! The Bihar police dramatically arrived in Mumbai to rain on their parade.

The focus shifted to the Cops vs Cops confrontation, and totally idiotic voices started taking sides while pointing fingers at just about anybody remotely connected to the tragedy. Overnight, the spotlight was turned on Bihar.

I was vastly amused by the dramatic arrival of an IPS officer from the state, Patna SP Vinay Tiwari, who made his Mumbai debut in style! There he was, a slim and trim young man with so much swag! I loved his attitude.

And above all, I loved that he kept his sunnies on while addressing the media, even though it was 8.30 pm. He came with bhaari backing from his bosses back home and didn’t mince words as he criticised the sloth/ineptness of his Mumbai counterparts. He all but accused them of messing up a sensitive case, and everybody cheered. Everybody, that is, who is not politically aligned. By now, the case had ceased to be an open and shut suicide investigation. Murder!

They said. There were wild rumours and wilder names flying around. All eyes were on the son (Aaditya Thackeray) of a top politician (Uddhav Thackeray), known for his self-declared close connections to Bollywood.

Bandra folks talked about late night parties and fights, leading up to the tragedy… and a whole new can of worms got opened. What was already a shocking death by hanging, suddenly became a much grislier story -- involving money, fisticuffs, booze, drugs, girls, assaults, gangsters, coverups and more. A masala script, with a terrible ending.

Why can’t our Mumbai cops be smarter? And develop a spine? The thing is -- left to themselves, they are smart, competent AND bloody good at what they do. But the political interference they have to endure completely stymies their best efforts.
Left to their own devices, and permitted to do their job, our police force is second to none. Unfortunately, the political environment being toxic and corrupt, they are forced to compromise, and in so doing, they end up looking like clowns.
Mumbai’s legendary top cop Julio Ribeiro has written often and forcefully about unseemly political involvement, especially when it comes to transfers and appointments in the police force.

He has mentioned an urgent need for police reforms, combined with more autonomy granted to the cops. Does anyone listen or care? In this case, it is obvious how hard political foes of the current lot controlling Mantralaya are working to discredit the government in power and topple it.

Back in Bihar, the stakes are equally high, with elections around the corner. What better than a juicy, high-profile case like this one, to fling mud, make allegations and divert attention from the real issues that both Maharashtra and Bihar are facing?

Surprisingly, the glamourous wife of a former CM of Maharashtra, Amruta Fadnavis, pitched in with her own personal dig aimed at the present CM and his minister son, taking the battle directly into the opponent’s camp.

Meanwhile, the lady at the centre of the controversy -- SSR’s girlfriend Rhea Chakraborty -- has turned invisible! Easily and smoothly.
Initially, the Mumbai police confessed they were “unable to locate” her or her family members -- all of them in the eye of the storm, after being accused by SSR’s father of being responsible for his son’s death.

Some said Rhea had left for Canada on a private jet, while others scoffed, joking that she was hiding under a charpoy in the suburbs. At the time of writing, she, her kin and two associates have been booked by the CBI and an FIR filed. And she is being questioned by the ED.

Tiwari, the dashing, straight-talking SP from Patna, ignominiously packed off to quarantine himself at the SRPF Guest House in the suburbs by Mumbai’s cops, must have chewed his nails in frustration till he was allowed to leave on Friday.

The other four cops had slyly managed to give everybody the slip and were already back in Patna. Phew! All this drama just to fix Uddhav Thackeray, get the CBI to handle the SSR case, and have the BJP back in the saddle in Maharashtra!

Had Mumbai’s police commissioner been a tougher person, with no political patronage involved (as is alleged), this investigation would not have taken such a strange turn.

The real tragedy is that SSR’s death is being used by so many agencies to further their own agendas.

He has become incidental! What started off as a much-needed debate on showbiz nepotism and how Bollywood can destroy the dreams of people who are not considered a part of the power structure, soon disintegrated into a sleazy crime thriller, with wild conjecture and crazy theories floating around.

The chances are, a week from now, this too will become one more high-profile death with nothing further to push the narrative to the next level. Unless, of course, there is a fresh development involving Aaditya Thackeray -- will he be summoned? People are taking bets on this. Nobody is actually interested in solving the mystery of either SSR’s money, or his horrific death.

Meanwhile, there is a lot of irresponsible talk about his fragile mental health, with publicity-seeking psychotherapists showing up on television shows and disclosing confidential client information. This is shockingly intrusive and unprofessional.

Prominent television anchors too have made utter idiots of themselves commenting on whether or not SSR had “looked depressed”.

Like depression is a “look”. Nearly everything about this awful incident has been trivialised and bowlderised in the most vulgar manner. Surely, Sushant Singh Rajput deserves better.