Deendayal was also particularly emphatic about the definition and role of the individual in society. 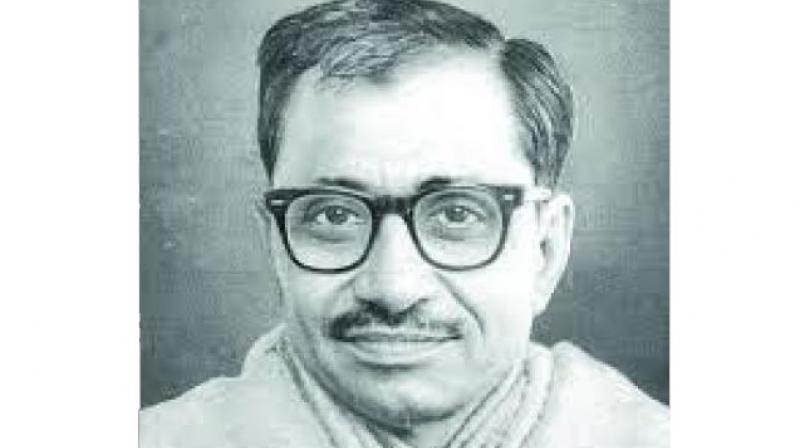 A week ago, the organisation, Vichar Nyas, brought out a special volume of their journal, Think India, dedicated entirely to Deendayal Upadhyay. The journal is edited by NCP leader and parliamentarian D.P. Tripathi. Among others, Murli Manohar Joshi, Shashi Tharoor and I had also contributed articles. This special volume was presented in a formal ceremony to Rashtrapati Ram Nath Kovind, where we were present, and had the occasion to say a few words.

The basic point that I had made in my article was that when a nation achieves freedom from colonial servitude, several voices emerge on what the new nation should aspire to be. One of these important voices was that of Deendayal Upadhyay. Whether we agree with everything he has said or not, is not important. What is relevant is that his defining idea of integral humanism, which he first articulated at the plenary session of the Bharatiya Jana Sangh in Mumbai in 1965, as a possible idiom for a new India, deserves to be judged for its sincerity, application of mind, ideological content and originality of thought.

As I have understood it, Upadhyayji sought to articulate an ideology that is first and foremost rooted in our own civilisational ethos. That endeavour cannot be faulted, because even if we achieved political independence from colonial rule only a few decades ago, the civilisational foundations of our nationhood go back to five thousand years. For a nation, that is also one of the oldest civilisations of the world, it is only befitting that we chart a future, with a modern ideology that does not ignore the refinements and thought processes of the past.

There is a misplaced notion among many educated Indians that any reference to our past history, especially the wisdom of ancient India, is synonymous with communalism. In my view, such an approach is itself a consequence of a colonised mindset. One of the prime projects of colonial rule was to convince the conquered that their own history, culture, religion, beliefs and value systems was vastly inferior to the “higher” knowledge and wisdoms brought in by the colonisers for the benefaction of the “natives”. The unfortunate fact is that this relentlessly biased critique was internalised by many of the ruled, especially the educated. The result was that, even after political Independence in 1947, there were a great many influential voices that devalued our civilisational heritage, and considered the project of modernity only in Western terms. Deendayal believed that Bharat, should not be reflexively imitative in its project of nationhood, and should, while welcoming change and modernity, draw also upon its own belief systems.

How much of Deendayal Upadhyay’s philosophy animates the BJP today, as the successor of the Bharatiya Jana Sangh? There were many important strands to his thinking, and the BJP, which celebrated his centenary last year with a great degree of energy and sense of appropriation, must evaluate whether it is also working in accordance with his vision. It is my assessment that Deendayal was not exclusionist in his religious views. He did speak of the concept of “Chitti”, which probably corresponds to the German concept of Zeitgeist, but he clarified that Chitti was meant to bring out the most positive or constructive content of each nation. Chitti, he said, is faith-neutral, and as per his integral humanism, all people have the full right to follow their respective faiths. As he wrote in 1962: “So long as Hinduism is alive, there is no danger to Islam. A Hindu does not discriminate between Ram and Allah… The concept of Hindu nation is neither negative, nor reactionary, nor territorial, it is a cultural and civilisational concept connoting positive direction.” If this is the case, the BJP must ask itself why, while venerating Deendayal, it has not firmly dealt with those members of the larger Sangh “parivar” who practice violence, hatred and divisiveness in the name of Hinduism?

Deendayal Upadhyay was also a great votary of social justice. This is clearly brought out by one of the lesser-known incidents of his life when in Rajasthan, in his capacity as the functionary in charge of the Bharatiya Jana Sangh, he expelled seven of nine MLAs of his own party for opposing the Zamindari Abolition Act. In this sense, his integral humanism had a strong “socialist” content. This is evident too in his views regarding the labour class employed in production. The machine, he said, should not become a competition to human labour. To quote him: “Machines cannot be blamed if the labours are displaced and subjected to privations. It is the fault of the economic and social system which cannot distinguish between the object and the instrument.” Why then has our government, which otherwise pays rich tributes to Deendayal Upadhyay, allowed for so much jobless growth, and paucity of jobs? And why, with an ideological mentor like Deendayal, with his strong commitment to a just and equal society, is the BJP perceived to be less than sensitive to the dalits?

Deendayal was also particularly emphatic about the definition and role of the individual in society. A citizen, he argued, must be seen as an integral whole, and endeavours for his individual freedom must never be ignored. Given this straightforward position, the government must ask itself to take a most recent example, why the ill-advised order was announced regarding punitive action against journalists who could be arbitrarily accused by the powers that be of peddling “fake news”? It is good that the Prime Minister promptly annulled his own minister of I&B’s order, but questions remain as to how she could make such an announcement without his approval in the first place?

All political parties must ponder deeply about Deendayalji’s central argument that, if man is at the centre of the cosmos, no institution or system can function to optimal levels unless human beings themselves undergo a positive transformation. If good people helm even a sub-optimal system, there are chances that it will resurrect itself. However, if less than good people run even good systems, it is a certainty that the system will deteriorate. True indeed!