Leher Sethi
Leher Sethi is an entrepreneur and social activist 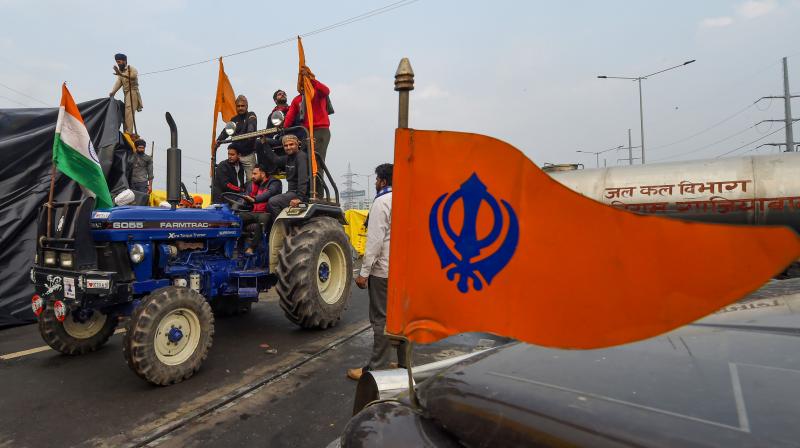 What started out as a peaceful protest took a violent turn, as the “tractor rally” went rogue. (PTI file photo/Manvender Vashist)

Up until recently, the farmers’ protests were predominantly perceived as a Sikh-led phenomenon, owing to the agitators being largely from Punjab. Their leadership was a standout feature in the media reports of the protest, as was a certain projection of it as being a rising of a particular regional cluster. In a sense, it was also true. For, langars are the trademark public kitchens of the Sikh community, which fed not just protesters, but also locals and labourers.

Though, with a series of talks that had yielded no results, a larger collective frustration was building, it wasn’t generally palpable. All that changed on Republic Day.

What started out as a peaceful protest took a violent turn, as the “tractor rally” went rogue. A shocked nation saw images beamed on TV and viralled on social media of a youth going up a flagpole with the Nishan Sahib. Even people initially supporting the protests suddenly became wary.

As someone who has visited the protest site before and after the episode, the mood change around me was striking. While it is commendable that Delhi police did not using brute force and showed uncharacteristic calm on a day of great national significance, protesters freely entered the Red Fort and indulged in condemnable vandalism. Within a few hours, public sympathy shifted from the protesters to the police.

In the next few days, farmer union leaders were booked for various cases and FIRs were registered. The mood at protest sites turned sombre and despondence marked the air. The high spirits of protesters and supporters were dampened. Theories and counters floated in the air. Conspiracies were cooked up. The protesters had let themselves down, and the ball was back in the government’s court.

The action shifted towards the Yogi Adityanath-ruled Uttar Pradesh. Police cleared smaller protest sites with alacrity. The next target was Ghazipur. Electricity and water supply to the demonstration site were cut. The district magistrate issued a notice to protesters to clear out. Many people began returning home. It looked like the movement was over.

But no one could have predicted what happened next.

With a handful of protesters left in Ghazipur, Rakesh Tikait, a 51-year-old police-constable-turned-farmer-leader, broke down in full view of TV cameras. I could be wrong, but it felt like a large section of media covered his tearful speech just to show how farmers had to eat humble pie. It would mark the TV closure to all protests.

“I will drink water only when someone from my village brings it to me,” claimed Tikait. His willingness to court arrest and resolution of not to vacate the site went viral.

Mr Tikait’s tears struck a chord with farmers. The issue for them changed from being one pertaining to livelihoods to that of honour. Mr Tikait’s humiliation stirred reactions from across north India. Thousands of farmers started moving towards Ghazipur, not just from western UP, but also Haryana, Punjab, Rajasthan and Delhi.

The scenario was transformed quickly. Officials at Ghazipur met Mr Tikait, electricity was restored and additional police forces that had gathered there retreated.

Interestingly, Mr Tikait admits to have voted for the BJP in the last Lok Sabha elections, as did most people from his Jat community-dominated village of Sisauli in Uttar Pradesh’s Muzaffarnagar district. The BJP candidate and Union minister, Sanjeev Kumar Balyan, belongs to the same Baliyan khap (clan) headed by Rakesh’s elder brother, Naresh Tikait. For a Jat, it is no small matter.

As farmers started pouring in at Ghazipur, there was a call for a Mahapanchayat in Muzaffarnagar. Led by Jats, lakhs of peasants of all castes and communities, including Muslims, took a Namak-Gangajal oath, also called the Nun-Lota Kasam, marked by the blowing of a traditional war trumpet. It is a pledge to fulfil a task, and it includes the social boycott (hukka-paani band) of those who do not participate in this common war.

Jayant Chaudhary, son of Ajit Singh, poured gangajal from a bottle into a lota (pitcher) of namak (salt). A khap is a traditional social council representing a community in parts of north India with a chaudhary as its titular head. Khaps, not limited to Jats’, constitute a front of 36 biradaris, including Muslim, Jats, Gujjars and other OBCs.

In 1857, India’s first revolt or mutiny began with the Namak-Gangajal pledge, taken by the Sarvakhap panchayat of Haryana and the Upper Doab (present-day west UP), against the rule of the British East India Company.

The peasant protest has turned into a movement and its control has shifted from the traditional secular-Left to conservative caste heads invested deeply in bhaichara. People are no longer rallying around economic issues, but for honour against a cultural insult, handed out in their thinking by the Narendra Modi-Amit Shah “regime” to all peasant castes. It seems the kisan movement has trumped the BJP’s cultural-emotional hypernationalism with its own card of peasant cultural-emotional nationalism.

The khap unity between Jats and Muslims, divided during the Muzaffarnagar riots, is significant because such cultural bonding could never be achieved by the secular ideologies of the Congress, Left or the AAP. It is an invocation of the indigenous cultural ethos of north Indian peasantry. In an amazing spectacle, thousands continue to assemble for Mahapanchayats, despite Internet bans. Post-Muzaffarnagar, there have been Mahapanchayats at Mathura, Bhagpat, Palwal and Bijnore, even as the movement continues to gather momentum.

The BJP has thus far successfully managed to “other-ise” the anti-farm law protesters. But it will be very difficult for them to deal with dissent from a traditional vote bank. The “Khalistani” angle will no longer work either, with protesters here not being predominantly from the religious minority groups, like Muslims and Sikhs, but Hindus from the Hindi heartland.

Prime Minister Modi has reiterated that the government’s offer to suspend the contentions farm laws for 18 months and conduct negotiations. Yet, it seems that the Centre has landed itself in a veritable Catch-22. The sons are not leaving the soil.

With inputs from Amaresh Misra, author, War of Civilizations