Nagaland has never elected a woman legislator since it attained statehood in 1963. 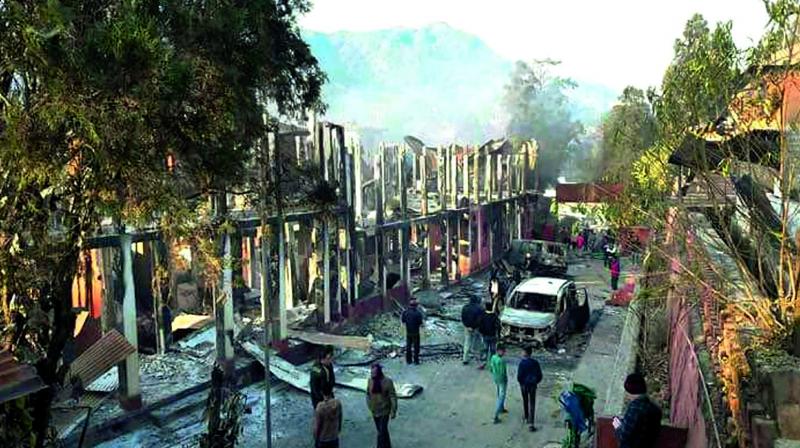 Naga tribals set ablaze the Kohima Municipal Council office and the office of the district collector during their violent protest in Kohima. (Photo: PTI)

The violent opposition in Nagaland against the entry of Naga women into active politics and the state government buckling under pressure and calling off the municipal elections, where 33 per cent of the seats were reserved for women following an interim order of the Supreme Court, has raised the question as to whether the state has failed in upholding the rule of law and the Constitution.  The issue has also brought to the fore the question of gender justice in Naga society. The group of influential Naga women under the banner of the Joint Action Committee for Women’s Reservation (JACWR), which had filed the special leave petition in the Supreme Court in 2013 seeking 33 per cent reservation for women to contest the municipal polls, braving arguments that Naga customary laws prohibit women in active politics, has now been compelled to withdraw the petition from the Supreme Court in the past week of tumult that Nagaland has witnessed.

The conflagration doesn’t seem to die down with the protesters, organised under the banner of the nascent Nagaland Tribes Action Committee (NTAC), pressing with their demand for the resignation of chief minister T.R. Zeliang, who is heading the Democratic Alliance of Nagaland (DAN) government, of which the BJP is a partner. Backed by his MLAs, Mr Zeliang is putting up a brave front saying that his government has already called off the elections “respecting public sentiments”. The CM has condemned the “senseless vandalism”, stressed the freedom of expression and an alternate viewpoint, and said his government was bound by the Constitution to maintain order. He rejected the demand for resignation. The question now is whether all Naga men are against their women being able to enjoy gender equality and contest elections, or whether CM Zeliang’s political opponents are egging on the protesters to overthrow the state government by creating a situation that reaches a flashpoint.

In this backdrop, the recent statements by Lok Sabha MP Neiphiu Rio, a former Nagaland CM, is significant. He claims Nagas are not against 33 per cent reservations for women but were “unhappy over the way the government has been trying to override the provision of Article 371A by invoking Article 243T”. Mr Rio sees this as a bid to dilute the customary laws of Naga society. Article 371A says no Act of Parliament can change things like Naga customary laws, social or religious practices of Nagas, ownership and transfer of land, etc, unless such a law is approved by the Nagaland Assembly. Article 243T on its part simply provides for women’s reservation in civic polls. It says: “Not less than one-third of the total number of seats reserved under clause (1) shall be reserved for women belonging to the Scheduled Castes or, as the case may be, Scheduled Tribes...” A senior political leader like Mr Rio, who was once considered quite close to the BJP central leadership, can actually do a lot in defusing the situation and is expected to provide a solution to the current crisis, that, obviously, does not lie in simply calling off the civic elections.

Nagaland has never elected a woman legislator since it attained statehood in 1963. In the past few years, Naga women have come up with a strong counter-narrative in favour of taking active part in politics. In a statement issued in the midst of the protests by the opponents of women’s reservation, JACWR said: “The aspirations of the other half of the Naga population, Naga women, our fundamental rights, the right to participate in electoral processes has been violated by bandhs, threats and use of force in the towns where candidates, including women, were unable to file their nominations or forced to withdraw their nominations.” The voice of the women is being “muffled by unprecedented un-Christian methods (Nagaland is a Christian-majority state) of destruction of private property of candidates, (besides) banishment and excommunication of candidates,” including women candidates and leaders, by tribal organisations, the statement added. This, the JACRD said, was the situation before the polls due on February 1.
As the anti-quota stir gathered steam, one was surprised to see demands for the dissolution of the influential Naga Mothers’ Association (NMA) formed in 1984. This was perhaps because the movers and shakers of the women’s reservation demand are associated with NMA, which has, of course, rejected the demand for its dissolution. No “outside forces” can dictate the NMA is the refrain.

A critical question arises: is it time for the government or the courts to come up with a clearer interpretation of Article 371 itself in the context of demands for greater autonomy or federal restructuring in Nagaland? After all, the situation in Nagaland clearly proves that the state is not in a position to implement even an order of the highest court due to pressure from certain groups. In fact, the Supreme Court had come up with an “interim relief order” on April 5 last year allowing 33 per cent reservation of seats for women based on the special leave petition, pending a final judgment. It is quite possible that only a handful of people are behind the unrest or the opposition to the quota for women, but if that is so, why has Naga civil society or the state government not been successful in going ahead with the polls after convincing different stakeholders. These are questions that require answers. Until then, it is a new front the government has to tackle in Nagaland in the days ahead. One cannot also rule out the possibility that this situation will impact the ongoing peace talks with the Isak-Muivah faction of the National Socialist Council of Nagaland (NSCN-IM).