Opinion   Columnists  07 May 2021  K.C. Singh | Heal at home first, then try to be a global leader
Opinion, Columnists

Mr Jaishankar, even when overseas, has become a flag-bearer for the current Hindutva model, precursor to the RSS’ Hindu Rashtra dream 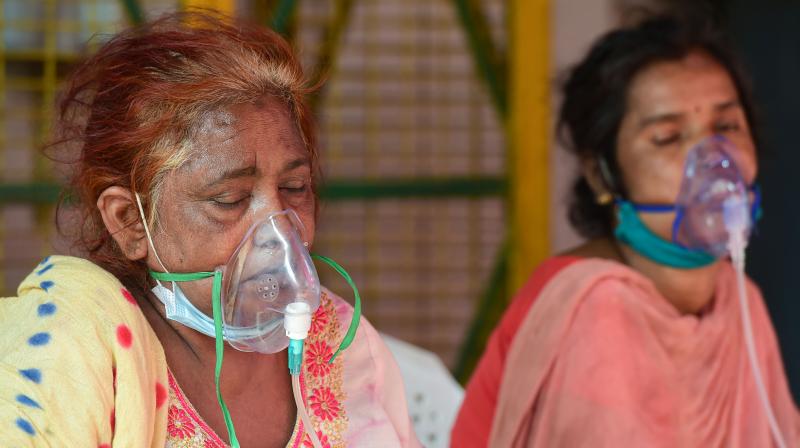 Critical COVID-19 patients receive free oxygen at a Sikh Gurudwara, amid the rise in coronavirus cases across the country, at Indirapuram in Ghaziabad. (Photo: PTI)

While India was distracted by the macabre events in and outside hospitals in Delhi and other major cities as patients gasped for breath, and some even died as the oxygen ran out, minister for external affairs S. Jaishankar headed to London for a meeting of G-7 foreign and development ministers earlier this week. Also invited, besides G-7 members, were the ministers of South Korea, South Africa and the chair of Asean. Mr Jaishankar had just met US secretary of state Antony Blinken and his host, British foreign secretary Dominic Raab, when some members of his delegation tested positive for Covid-19. What could represent his government’s mishandling of the coronavirus’ second wave than this international embarrassment?

The G-7 meeting, preparatory to the summit later this year, issued a long joint statement. US trade representative Katherine Tai set the scene by announcing on its eve that the United States supported the Covid-19 Trips waiver at the World Trade Organisation. Its preamble begins by recognising the “critical juncture” at which stand “our people, our planet, our security and our future prosperity”. This holistic approach is most welcome as it recognises the connection between pandemic elimination, future pandemic avoidance, climate change centrality and the world’s prosperity depending on global interdependence.

Then it addresses the themes of continuing relevance, if the G-7 nations have to retain their moral advantage over the Chinese model of single-party rule favouring economic over political and humanitarian rights. It asserts that democracy “is under pressure globally”. The pandemic is of course the immediate challenge. New technological challenges also lurk over the horizon. The seven nations reiterate their commitment to strengthen open societies, shared values, a rules-based international order, free and fair trade and the free and secure flow of capital. It concludes that “liberal democracy and free and fair markets remain the best models”.

Before coming to the specifics of relevance to India, this broad template should be read carefully by the Indian government. Much of its actions in the second year of the Narendra Modi government’s second term do not tally with this vision. Mr Jaishankar, even when overseas, has become a flag-bearer for the current Hindutva model, precursor to the RSS’ Hindu Rashtra dream. Reflexive intolerance to criticism, having his ministry flail at the likes of pop star Rihanna and climate icon Greta Thunberg for supporting the farmers’ agitation in India, ill behove India as a model for democratic governance. While the pandemic prevails, India may get a pass, but it won’t be for long.

On Covid-19, the US agreeing to support the Covid-19 Trips waiver is a big success for India and the developing world. The G-7 statement, while conceding in para 2 that “global collaboration” is required, changes its tune in para 62. It states that to enable equitable global access to Covid-19 vaccines, therapeutics and diagnostics (VTDs), they promise to work with industry “to encourage and support on a voluntary basis and on mutually agreed terms, including licensing, technology and know-how transfers, contract manufacturing, transparency and data sharing”. Then they recommit more assistance to the global vaccine-sharing programme Covax.

Although since October 2, 2020, when India and South Africa introduced the Trips waiver at WTO, as India’s former permanent representative to the UN in New York Syed Akbaruddin tweeted, 60-plus nations have co-sponsored and 100-plus nations extended support to it in the 164-member body. The G-7 statement shows residual resistance in Europe, which may slowly dissipate as the US draft gets circulated and perhaps amended to reflect corporate interests. In any case, it means two things -- a waiver is not coming soon enough to help the developing world this year; and India has to take the lead in compelling indigenous manufacturers to voluntarily waive Trips cover and share their intellectual property to put moral pressure on the foot-draggers at WTO. However, so far, the Indian government is headed in the reverse direction by putting half the vaccine production in the market for states and the private sector to haggle over. The CEO of a major hospital chain in Gurgaon claimed on television that he was offered vaccines by intermediaries at higher prices. Will the Indian government now end up with a controversy of its own making?

However, past experience shows that the US throwing its weight behind a proposal generally gets European compliance. Germany and Switzerland may be the last holdouts. In the meanwhile, India requires to focus on two things — normalising access to hospitals by ramping up beds with oxygen, ICUs, etc. The supply of oxygen must take into account not only escalated hospital needs but also the moderately ill who are self-isolating at home. Also, to address vaccine supplies as the government has compounded the confusion by opening-up vaccinations for the 18-plus age group just as the supply has dried up. Serum Institute CEO Adar Poonawala abandoning his factory, alleging threats and making gratuitous statements from his lair in London needs deft handling. In any case, the US has now released raw material for 20 million vaccines, which he needs to put in vials promptly.

What may yet negate the pharmaceutical industry’s greed is the desire of Russia and China to play the Good Samaritans, as part of their counter-West strategy. Not coincidently, two-thirds of the G-7 statement has them in the crosswire. One or the other figures directly in the paras relating to Ukraine, the Indo-Pacific, Myanmar or Taiwan, the entry of which to WHO has been endorsed. They also are the objects of themes like a rules-based order to human rights and freedom of religion, as indeed democracy. So, the news that Russia is starting mass production of a single-dose Sputnik vaccine comes as great relief. India also needs to be more proactive internationally in tying up contracts with emerging vaccines like a new RNA based product of Cure Vac, Germany, the final results of which are awaited in mid-May, which unlike Moderna and Pfizer can be stored in fridges. There is also the US-supported initiative between Baylor College of Medicine and the Hyderabad-based Biological E for a safe, effective and affordable vaccine. Its production does not start till later this year. This has the potential to inoculate the world.

The moral for India is that a government which cannot prioritise between a looming health emergency at home and its political and religious interests will hardly be viewed as a global leader in fighting pandemics, or anything else. Our slogan has to be to heal at home first — politically and health-wise.