Brining back lakhs of migrant workers home is a herculean task, and the government must be complimented for that 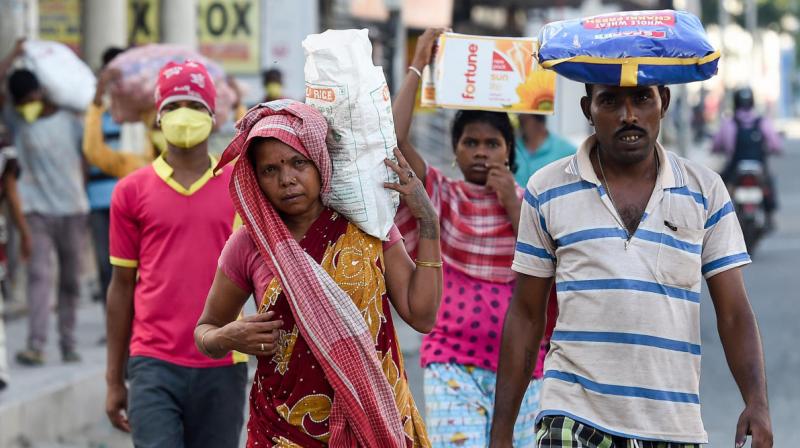 Ever since Independence, we have known of our states, districts, blocks and panchayats as different administrative units to facilitate the smooth governance of our country.

In our battle against the Covid-19, pandemic, new administrative units have been created namely the three zones: red, orange and green, identified by the levels of the virus’ spread in these areas.

There is, however, another category which also got created during our fight against Covid-19: of two deeply divided economic classes  the rich and the poor.

I am sure that the colour-coded three zones (red, orange and green) will disappear one day, but this class divide which has been created by the government’s unplanned strategy to fight the pandemic might linger.

This class divide is not always visible from the naked eye, but goes very deep, and may not be very easy to remove. India has always had faultlines of caste, religion and region, to which we have added one more the faultline of economic class.

Not that this divide was non-existent even earlier. It was always there, but now the divide is far deeper and wider.

There is a good reason why this class divide between the rich and the poor widened during the lockdown. When the lockdown was announced all of a sudden, a large number of daily wage labourers and others wanted to return to their villages even if it meant walking thousands of  kilometres, as no transport was available.

While the government did make some arrangements for buses to send them home, as things got out of hand in some locations, a large number of migrant workers were chased away by the police with lathis and batons, on the instructions of their political bosses.

The government did make an appeal and provided whatever help it could to the poor migrant workers and things calmed down to some extent after a while. But soon after the lockdown was extended till May 3, buses were sent to Kota, Rajasthan, by several state governments, starting with Uttar Pradesh, to bring back students to their respective states.

These governments hardly needed any time to obtain the necessary permissions for these buses to run hundreds of kilometres despite the complete lockdown in place. Earlier, chartered flights were sent to different countries to bring back Indians who were stuck abroad.

The government went out of its way to help the middle classes and gave all possible help to bring them back home as the lockdown remained, but looked the other way when the poor needed similar help.

While it is true that government did its best to provide food and other necessary items to poor migrants, mostly daily wage earners, in many cases the amount of help which was provided was far less than what was required.

Not that the students who were stranded in Kota were not getting food to eat, they were also getting food to survive, but the need they felt was to be with their own family members at this moment of crisis.

Even if the government had made some arrangements to give food to the stranded migrants, many of them still wanted to return to be with their families. There is no reason why the poor should not have the same desire as the middle classes in the times of crisis.

In an age of 24/7 news television channels, and with several social media platforms active, such information spreads faster and wider than we think. There is no reason why these poor people won’t be upset with the efforts of the government, and by default  with middle class people in general, as the poor generally believe that the middle classes and rich people are able to get their work done more easily as they have “good connections” with government officials and politicians.

The story of the stepmotherly treatment with migrants did not stop here: while in most other rescue operations involving the Centre and the state governments, the economic burden was taken up by the State, in various instances migrants who had to go back home to their villages and small towns were made to pay for their journey.

It is important to note that the civil aviation ministry, which arranged Air India flights to bring Indians stranded abroad back home, has raised a bill of nearly Rs 6 crores to the Government of India for providing their services. Those Indians who were brought back were not required to pay, but a large number of poor migrants had to pay for their journey back home. It is strange that not only were the rich given priority in rescue, but it was free of cost, while the relief for migrants not only came late, but they had to pay as well.

The question simply cannot be avoided: why this double standard for different classes of people?

During the first few days of the lockdown, the economic hardships of a large number of daily wage earners were not even marginally less than what they face at this moment, but the social divide between the rich and the poor was far less then compared to what we see now.

The initial days of the lockdown also saw the middle classes coming out in large numbers to support their livelihood, which is somehow missing during this period of extended lockdown.

Brining back lakhs of migrant workers home is a herculean task, and the government must be complimented for that. Had the government given a few days’ time to these migrants to go home before the lockdown curbs came into force, the migrants in large numbers would have gone home on their own, and saved the government a lot of problems, and expense too.

But even if the government is successful in sending all the migrants home now the divide which has been created between the rich and the poor in our society, especially in urban India, will be difficult to bridge once again.

Controlling the epidemic, however deadly it may turn out to be, might be much easier than rebuilding trust among various classes of people in Indian society.