It is possible that some of the J&K separatists and the Naxalites are fanatical ideologues, but there are many others who are not 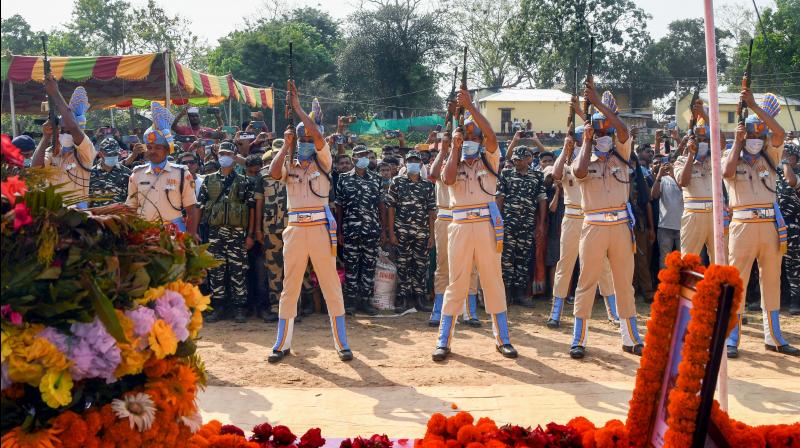 Security personnel pay tribute to CRPF jawan Shambhu Roy, who died in a gun battle with Maoist rebels in Chhattisgarh, during his funeral ceremony at Dharmanagar in North Tripura district on April 6, 2021. (PTI)

This time around, there was a fair and square battle between the security forces, comprising mainly of the Central Reserve Police Force (CRPF), and the Naxalite group People Liberation Guerrilla Army (PLGA), unlike in previous incidents in June 2013 when Congress leaders of the state were killed; in July 2018 when 24 CRPF personnel were killed; and in March 2020 when 19 Chhattisgarh police personnel were killed. The two sides were quite even in terms of men and weapons. The CRPF operation to nab PLGA commander Madvi Hidma did not work. The encounter on Saturday turned out to be an ambush as well, but it was part of the battle tactics. The security forces might have been misled by false information. That remains a strong possibility.

It is a good sign both Union home minister Amit Shah and Chhattisgarh chief minister Bhupesh Baghel returned to their posts immediately, cutting short their election campaign visits to Assam. Mr Shah also spoke to Mr Baghel on the phone and there seems to be some coordination happening on the ground. Congress president Sonia Gandhi, in a statement paying her respects to the security personnel who were slain, pledged the support of the Congress government in the state to the Centre in fighting Naxalism – on which there appears to be some unity of political purpose. It was the belief of former Prime Minister Manmohan Singh and former home minister P. Chidambaram that Naxalism was the greatest threat to the country’s national security.

It is a fair question ask, therefore, why the governments in Chhattisgarh and at the Centre are unable to tackle the challenge of the Naxalites. It is plausible that the topography of the Bastar region in the state makes it easy for the guerrilla groups to operate effectively, and it will not be easy for the security forces to eliminate them completely. It will have to be a continuous engagement. What is needed then is an overarching strategy to counter the Naxalites.

There will be many who will argue that the problem is the backwardness and poverty of the people in the area, and that once development reaches the people, the Naxalite threat will vanish. This is a legitimate but partial view. It should not be derided and dismissed out of hand as is often done by the ostensible security hawks. The hawks want an all-out war against the Naxalites, and the solution they see is in the complete wipeout of the guerrilla groups. This is a slightly wrong-headed, if not pig-headed, view of a much larger issue. When you are fighting the Naxalites, you are also fighting an ideology. There is a need to counter that ideology. This can’t be done by the security forces alone, or simply by improving the physical infrastructure. There is a need to support and protect the democratic culture among people, so that they value the privileges of liberties that a democratic system guarantees in contrast to the totalitarian methods of the Naxalites. One of the effective ways of countering Naxalism and Maoism is to improve the democratic working of governments. Ordinary people must have a say in matters involving their governance. More than sophisticated weaponry, it is grassroots democracy that will eventually defeat the Naxal menace. There should be little doubt that Naxalism is an ineffective fight against economic and social inequalities.

All governments, and it’s not just the BJP, by and large tend to attack democratic activists over their sympathy for the Naxalites. By attacking the activists, the governments show themselves to be intolerant and tyrannical. The activists in many ways act as mediators between the poor people and governments, and they create a buffer zone between people and the Naxalite groups. At the same time, the government needs to fight the hard battles with a better strategy. This would involve the financial and arms supply lines of the Naxal groups. This has been the case with all insurgent groups in South Asia. It was a moot question as to how the now decimated Liberation Tigers of Tamil Eelam (LTTE) sustained their money and arms supply lines. The final defeat of the LTTE happened because its supply lines were choked. This has to happen with the Naxal groups too and it would require intelligent counter strategies rather than just stepping up surveillance and creating checkpoints.

There is also a need to explore the possibility of political deals with the insurgent groups, as had happened in the case of the Northeast militant groups. This may not work as it had not in many cases in the Northeast. One of the subtle motives behind insurgencies is that existing political groups bar the doors to new entrants. Instead of weaning away individuals and small groups with economic and social incentives to join the mainstream, it may not be a bad idea to deal at the political level with the Naxal groups. But that would require a rigorous assessment of the strength of the rebel groups.

The government and the vested political interests should be intelligent enough to deal with the Naxalites at the political level. It may go a long way in dealing with the problem of the Red insurgency. This approach applies in the case of the J&K separatist groups as well. There is no guarantee that the political approach would succeed, but it would at least open another window of opportunity.