Instead of causing revulsion, the explosion of gory images has made communal violence the new normal. 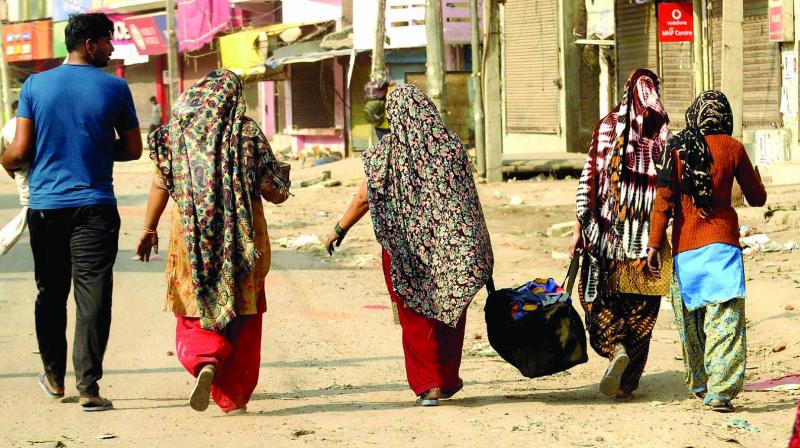 The 2002 Gujarat riots were India’s first televised communal riots. After decades of reading reports describing how “one community” had attacked members of the “other community”, for the first time, religious identities could be affixed on the victims, as well as the perpetrators of communal violence. They could be identified by the clothes they wore (no pun, intended or otherwise), by the backdrop where violence was taking place, often by names of the colonies where the violence was taking place and even by the weapons they carried: for instance, the trident was indisputably a “Hindu weapon”.

In 2002, communal violence entered our drawing rooms and bedrooms for the first time. Because TV coverage was often live, audio tracks were telecast unedited, enabling a peep into a world of gore and violence that had hitherto existed just in imaginations. Many believed that such coverage would breed horror and repulsion against the perpetrators, irrespective of the religious identity of viewers, and Indians would cast away the darkness that lurked in their hearts. Yet, this has not happened, and if we are to plot an imaginary graph of communal sentiment, it would have risen significantly since the horrific violence in Gujarat all those years ago.

The 2020 Delhi riots were India’s first “handset riots”. From the television sets kept in a room and characterised by community viewing, in homes and neighbourhood shops where people would gather like during cricket matches, the communal riot has progressed into the innermost personal space onto every individual’s palm. The easy availability of smartphones has enabled people to access images of communal violence any time of the day, of their own volition and not courtesy TV channels who decide what to show and when. The social media and technological advances has enabled everyone who is either a perpetrator, victim or witness to become a “reporter”, with no restrictions, moral or official.

Instead of causing revulsion, the explosion of gory images has made communal violence the new normal. Retributive violence will likely become more prevalent as technology enables people to see what is happening on a real-time basis and decide their responses. People have checked the social media to see which roads were safe and which were not. Many accounts have demonstrated how people learnt that others of their community were being attacked two or streets away, and decided what to do -- flee, or go out and join the bloody, life-taking melee.

During the days when India’s capital was rocked by riots, the government’s response to the unfathomable multiplication of riot images through mobile phones and the social media was ironical. It was the same government that had blocked the Internet in several parts of India at the whiff of anti-CAA protests and kept Jammu and Kashmir under a Internet and social media lockdown for months. This time, however, it allowed people the continuing unbridled use of social media.

Responses to the incessant circulation of videos showing communal riots evoked different responses. On the one hand, it amplified anger provoking instant reactions, at times in the form of accentuating violence. On the other hand, it conveyed the sense that what we are witnessing now is unprecedented. Both reactions damage rationality and reason. Sadly, it also has the power to disconnect a large section of the “thinking class” from history, and view the recent developments as either the “worst ever” or of “unprecedented enormity”. Such depiction only enables the other side to consolidate its ranks.

There was an account a few days ago of a copy of the Quran lying half burnt in the debris of a house which had been first ransacked and set on fire. The incident was presented as unprecedented and used to arouse passions. Listening to this account, I was reminded of images lying tucked inside the mind. The year was 1987, and the setting was a slightly upscale residential colony in Meerut, then under the siege of massive riots which saw two of the most gruesome episodes of violence against Muslims —Maliana and Hashimpura.

In a charred room of the house of well-known Urdu poet Bashir Badr, a badly singed copy of the Quran was the starkest visual for the photographer to zoom on. None of the neighbours who sheltered the family till they departed from the city till normality returned were willing to keep the holy book for safekeeping. Eventually I picked it up and passed it to a friend who knew the poet. That would not have been the only time someone’s scripture was destroyed.

Communal violence comes back repeatedly in different forms and in different places, at times as “repeats” or as first-time violence. Not losing sight of history is a way of combating this. Communal violence does not scar just one community, although the minority bears the brunt most often. Instead of being consumed by violence, either as victims or as observers, it is important to scrutinise the politics that led to the Delhi violence or those rounds that may occur in future.

Riots are always incubated in macabre minds, but it is always an instrument to gain political leverage. The Delhi violence in 2020 has been compared to the previous episode in 1984, and many people have rushed to say that this time’s tragedy too was a pogrom. From the other side, it is contended that because the scale of violence was much smaller and more spontaneous, such comparisons are politically motivated. Eventually, the nomenclature of violence becomes irrelevant.

The availability of communal riots on the mobile phone further desensitises society, and retribution against the “other” becomes a matter of pride and a form of entertainment. Weapons are normally in the hands of regimes that target their enemies, beyond frontiers or within. Billions of rupees are spent globally to research new forms of warfare, biological or chemical. But within our midst, the most common item without which people get incapacitated if they get separated from it, the mobile phone, has become the carrier of the most potent weapon to destroy sanity and  convert society into one which wishes to consume violence ceaselessly. The tragedy is that there is no real way of blocking this.