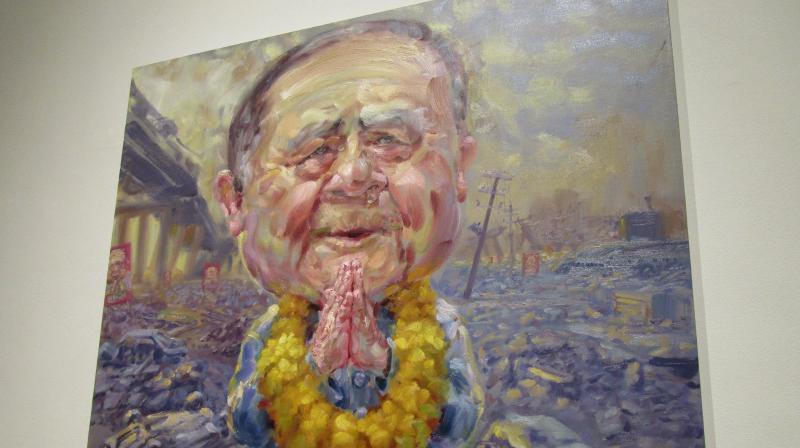 Well-known Thai artist Lampun Kansanoh's caricature of the Thai PM at the Biennale.

“We condemn and call for the immediate stop to the use of violence against the protesters and express our support for their struggle for democracy.”
— Letter, signed by 25 artists of the Bangkok Art Biennale

We always talk of art following life, but at the Bangkok Art Biennale 2020 (BAB 20), it looks like life is following art.

One is referring to the long political demonstrations in Bangkok, asking for reforms in the leadership of the country. These have become an occurrence parallel to the three-month mega art event. In fact, one of the chief venues of the Biennale is located in one of the main protest sites. 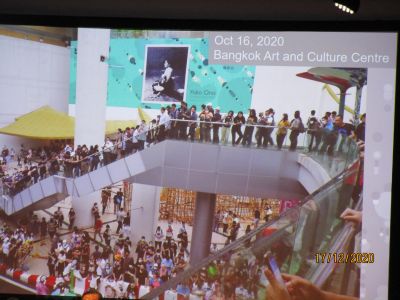 Political protesters converge outside BACC, one of the key venues of the Biennale.

It was not a coincidence that 25 international artists of the Biennale took a vocal stand supporting the political protesters, and issued a letter in October, even before the BAB opened.

In spite of the political protests in the city, not to forget the Covid pandemic, many of the international artists chose to attend the Biennale, even though they had to go through a long, two- week quarantine-period, first.

The official Letter of the BAB Artists mentioned: “As participating artists of the Bangkok Art Biennale 2020, we are deeply concerned about the events that have unravelled in Bangkok over the past days, in response to the ongoing protests calling for democratic change.

“Many of these events have taken place in the Pathumwan intersection where the Bangkok Art and Culture Centre (BACC), a key venue of the Biennale, is located and makes this response all the more urgent and necessary. As artists, we must not only maintain art as a space for reflection and debate on the issues of the day but also be able to speak directly to the situations that have literally arrived at our doorstep!”

Indeed, there was a day when the protesters “literally arrived at the doorstep” of BAB, when they congregated on the front grounds of the BACC.

No doubt they encountered some striking BAB exhibits there, including a large poster of one of the biggest artist-activists for human rights, Yoko Ono.

The 25 artists of the Biennale also protested against the use of force by the police on the peaceful protesters.

“We condemn and call for the immediate stop to the use of violence against the protesters and express our support for their struggle for democracy. We further urge the Biennale and the BACC to join us in taking a stand against such violence, and affirming the right to peaceful protests.”

Dr Apinan Poshyananda, artistic director of the Biennale, stated that being a “foundation”, BAB remained neutral. But he was aware that “art practices are a form of protest, as they are all conscious of the freedom of expression”.

That’s why he found a link between the protests outside, and the Biennale’s exhibits inside, especially in connection with the Theme of the Biennale, “Escape Routes”.

United States-educated, multi disciplinary Thai artist Michael Shaowanasai, stated that art was “an alternative reality of escape” for many of them. His Biennale exhibits included portraits of a monk, go-go girl, gay man, as he attempted to portray an “equal” society. He stated that the protesters on the streets were also asking for a “more equal” society, which was why he felt “so real” when he was with them.

Noted Thai artist Lampun Kansanoh is one of the few whose art works at the Biennale actually portray the protests, including a caricature of the Thai PM. As she said, “I don’t think my paintings can change or reform politics, but at least they reflect the angle of one person who disagrees with what the government is doing!”

Internationally renowned Thai filmmaker Penek Rattanruang’s video film 2 Soldiers was a tongue-in-cheek look at two soldiers, who “escape” the noisy protests to take a break in a peaceful forest. 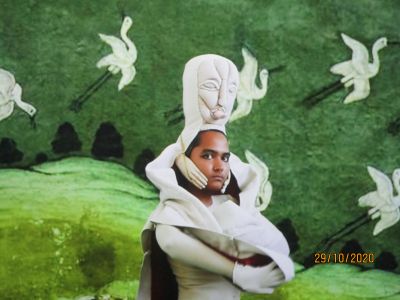 It is not a coincidence that many of the top artists at the Biennale are strong activists — Ai Weiwei of China, Marina Abramovic of Serbia, Yoko Ono of Japan.
Among the talented, young names, is independent and articulate Indian artist Sarah Naqvi. “In our existing times of growing authoritarian and sectarian politics, showing solidarity requires sharing and learning from each other’s struggles. Art needs to be a safe space where protests are mobilized, and resistance thrives” she stated.

The Biennale Artists’ Letter agreed: “As artists, we thrive in a society that supports our ability to speak out and speak to the times in which we live. Such a society is one that calls for progressive change, not with a crackdown, but a commitment to building understanding, dialogue and collectivity.”

Dr Apinan admitted that “Dialogues” are of vital importance today: “It’s time for everyone to do some soul-searching. Government bodies have to be more open-minded. Art infrastructure needs to undergo changes.”

When one sees the political protesters on the streets of Bangkok also asking for “changes” to the system, one sees that life is indeed reflecting art.

To quote the Biennale Artists’ Letter again: “We affirm the space of art as an essential constituent of the democratic public sphere which, in times of social upheaval, must also seek to provide refuge for those escaping violence.”

In fact, when the protesters gathered at the BACC, it was an “Escape Route” for the public, who felt safer inside the art centre than in the streets outside!

So, while it was the global pandemic that was the most challenging factor, at the start of the international art extravaganza, it now seems that it’s the local protests in the country that have added a new dimension to the three-month Bangkok Art Biennale, which is taking place at a historic time in the country indeed.