Signals from Amritsar: Is Islamabad listening?

The Amritsar Declaration espouses the developing consensus that a stable Afghanistan is a must for a stable region. 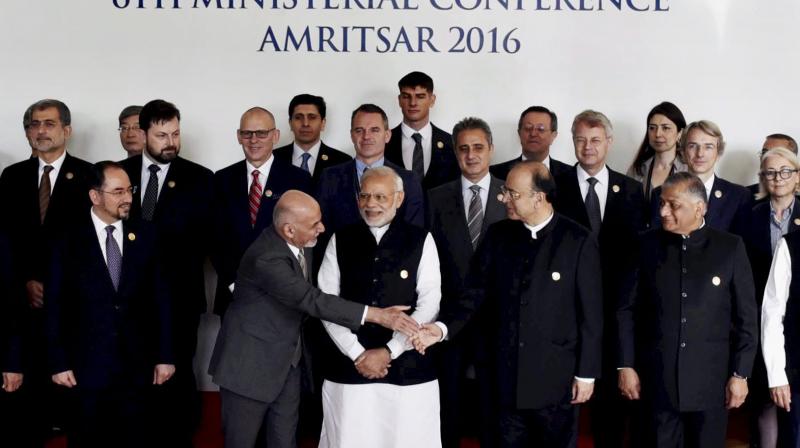 The 6th Ministerial Heart of Asia conference that was held in Amritsar on Sunday, jointly inaugurated by Afghan President Ashraf Ghani and Prime Minister Narendra Modi, was part of a process that started in Istanbul in 2011 and now includes 14 participating and over two dozen supporting nations. With this year’s theme being “Addressing Challenges and Achieving Prosperity”, President Ghani set the stage by outlining the “great opportunities” and “significant threats” that his country faces. Geography dictates logic as Afghanistan is a “natural land bridge” between Central and Southern Asia — to quote the Amritsar Declaration. It has unfortunately also become, since the 1979 Soviet intervention, the conduit for radical Islam, narcotics, illicit arms and terrorism. The Heart of Asia (HoA) process was to fill the vacuum anticipated after the downsizing of American military forces and the International Security Assistance Force (ISAF). The fear was that Afghanistan could again become the theatre for regional rivalries or surrogates battling to control Kabul.

But it could gain traction only if Afghanistan’s neighbours accepted that the peace and reconciliation process in Afghanistan had to be, as Mr Modi put it, Afghan-led, owned and controlled. Pakistan in particular had to concede that while its interests were genuine these could not take precedence over those of other neighbours nor be in perpetual opposition to the Indian presence or influence in that country. This zero-sum Pakistani thesis combined with the widely-held belief in Pakistani military and strategic circles that Afghanistan provided it strategic depth creates Afghanistan’s current existential dilemma.

Pakistani diplomatic and military strategy after the 9/11 terror strikes on the United States in 2001 and the arrival of US and Nato troops to eject the Taliban regime from Kabul and eliminate Al Qaeda relied on protecting the Taliban’s core. Pakistan aimed to use them once the US moved on to other global engagements or simply quit like it did after the Vietnam War. Thus unsurprisingly, when the US forces got enmeshed in a Shia-Sunni-Al Qaeda civil war in 2005-06 in Iraq, the Taliban reappeared in Afghanistan. Osama bin Laden’s compound at Abbottabad in Pakistan was also completed in 2005.

Concomitantly, Pakistan kept its India-specific militant assets intact both as adjuncts to diplomacy and to provide alibis for its lackadaisical counterterrorism action along the Durand Line. For instance, the terrorist attack on the Indian Parliament in December 2001 came soon after the September 9/11 attacks when the US was compelling Pakistan to act against its old ally, the Taliban in Afghanistan. Pakistan hoped that Indian military retaliation would enable it to withdraw troops from its counterterrorism duties on its Afghan frontier on the pretext of defending its eastern border.

Despite US allurements of aid and weaponry to Pakistan since 2002,  its core thinking on Afghanistan, conditioned by its paranoia over India, is unaltered. US economic and military assistance hovered around $2 billion per year from 2002 to 2008, falling to just over $1 billion in 2004. In 2009 it rose to $3 billion, further to $4.5 billion in 2010, before sliding gradually annually to $1 billion by 2014. It is now predominantly economic, though all through it was more than half military.

The Heart of Asia conference provided India the chance as the host to steer the discourse towards this hard reality that duplicitous Pakistani strategy undermines attempts to stabilise Afghanistan as they are unwilling to stop aiding and abetting known terrorist entities based in Pakistan. President Ghani openly alleged that the Taliban leaders told him that they cannot exist except for the refuge and assistance provided by the Pakistani state.

He contrasted this with the Indian development assistance that was without strings and ranged from the construction of the Afghan Parliament to Salma Dam, the Delaram-Zaranj road linking southern Afghanistan to Iranian ports and now the trilateral agreement between Iran, Afghanistan and India over the development of Chabahar port to provide an alternative Indian Ocean access to landlocked Afghanistan. The Amritsar Declaration lists the terrorist groups, including the Lashkar-e-Tayyaba and Jaish-e-Mohammad which are India-fixated. This was a major Indian success considering that China has been stalling the listing of their leaders by the UN Security Council committee on terrorist entities.

The Amritsar Declaration balances the challenges that basically are the nexus in the region between narcotics, terrorist groups and radical Islam against the path to “achieving prosperity”. While all members are enjoined to counter terror as per their national laws and international commitments, the future of the region rests on better connectivity, freer movement of goods and the reintegration of Afghanistan into the regional trading network. The Chinese “One Belt One Road” infrastructure vision is meshed with other regional rail, road and port networks under negotiation or implementation.

Above all, the Amritsar Declaration espouses the developing consensus that a stable Afghanistan is a must for a stable region. It recommends “increased political dialogue and consultations”. Conflicting reports emerged on whether Pakistan’s de facto foreign minister Sartaj Aziz met India’s national security adviser Ajit Doval. Hopefully, India did hear out his message, if there was one. The ceasefire having ended across the Line of Control and Pakistan getting a new Army Chief, it was necessary to judge whether the “surgical strike” doctrine has had any effect on Pakistani thinking. “Heart of Asia” may be a hyperbolic title for a conference on confidence-building in a dispute-ridden region. What is perhaps more significant for the region is what is in the hearts of Narendra Modi and Gen. Omar Javed Bajwa for trade and connectivity, as Saarc has discovered, get stymied when Pakistan makes confidence- building contingent on a resolution of the Kashmir “dispute”. We can only hope that the region’s message from Amritsar to reverse that kind of thinking is clearly heard in Islamabad.