Opinion   Columnists  06 Nov 2021  Manish Tewari | An alliance of civilisations: Can it give India leverage?
Opinion, Columnists

Manish Tewari | An alliance of civilisations: Can it give India leverage? 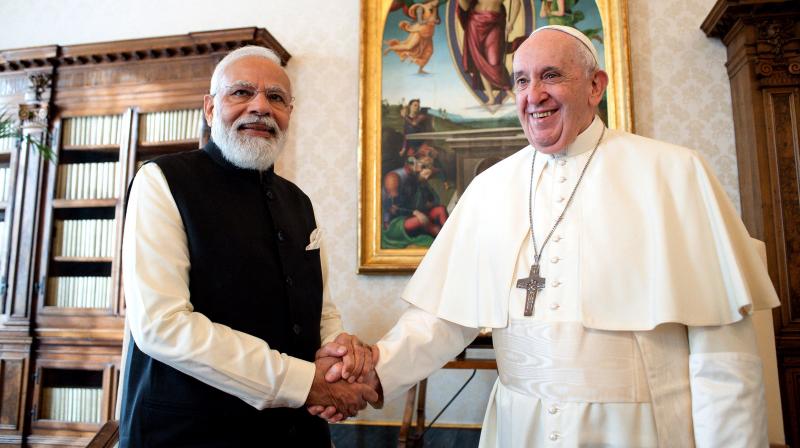 It is in this context Prime Minister Modi’s visit to the dominant seat of spiritual Anglo-Saxonism, the Vatican, and India’s participation in the nascent Western Quad need to be analyzed. (AFP)

The rise of the Taliban two decades after it was compelled to flee Afghanistan in the wake of 9/11 and the subsequent Operation Enduring Freedom once again focuses attention on Samuel Huntington’s theory of Clash of Civilisations and the Remaking of the World Order. Explaining why civilisations would clash he opined in the summer of 1993, “civilisation identity will be increasingly important in the future, and the world will be shaped in large measure by the interactions among seven or eight major civilisations. These include Western, Confucian, Japanese, Islamic, Hindu, Slavic-Orthodox, Latin American and, possibly, African civilisation. The most important conflicts of the future will occur along the cultural fault lines separating these civilisations from one another”.

Explaining the fault lines between the Islamic and the Anglo-Saxon civilisations, he wrote, “Conflict along the fault line between the Western and Islamic civilisations has been going on for 1,300 years. After the founding of Islam, the Arab and Moorish surge west and north only ended at Tours in 732. From the eleventh to the thirteenth century, the Crusaders attempted with temporary success to bring Christianity and Christian rule to the Holy Land. From the fourteenth to the seventeenth century, the Ottoman Turks reversed the balance, extended their sway over the Middle East and the Balkans, captured Constantinople, and twice laid siege to Vienna. In the nineteenth and early twentieth centuries as Ottoman power declined Britain, France, and Italy established Western control over most of North Africa and the Middle East. After World War II, the West, in turn, began to retreat; the colonial empires disappeared; first Arab nationalism and then Islamic fundamentalism manifested themselves; the West became heavily dependent on the Persian Gulf countries for its energy; the oil-rich Muslim countries became money-rich and, when they wished to, weapons-rich. Several wars occurred between Arabs and Israel (created by the West). France fought a bloody and ruthless war in Algeria for most of the 1950s; British and French forces invaded Egypt in 1956; American forces went into Lebanon in 1958; subsequently American forces returned to Lebanon, attacked Libya, and engaged in various military encounters with Iran; Arab and Islamic terrorists, supported by at least three Middle Eastern governments, employed the weapon of the weak and bombed Western planes and installations and seized Western hostages. This warfare between Arabs and the West culminated in 1990, when the United States sent a massive army to the Persian Gulf to defend some Arab countries against aggression by another. In its aftermath, Nato planning is increasingly directed to potential threats and instability along its “southern tier”. This centuries-old military interaction between the West and Islam is unlikely to decline. It could become more virulent.”

Huntington was prescient. 9/11 followed and the War on Terror commenced. First, Afghanistan was unravelled in 2001 followed by Iraq in 2003. It was complemented by Western-inspired and social media delivered revolutions across the greater Middle East colloquially, characterised as Arab Spring.

Tunisia, Libya, Egypt, Yemen, Syria and Bahrain erupted. In some nations there were regime changes while others descended into the morass of civil war from which they have still not emerged. Unremitting street protests shook the ruling entrenched and brittle ruling dispensations in Morocco, Iraq, Algeria, Iranian Khuzestan, Lebanon, Jordan, Kuwait, Oman, and even Sudan, situated in the broader definition of the Horn of Africa. Even the regimes in nations like Djibouti, Mauritania, Palestine, Saudi Arabia and Moroccan-occupied Western Sahara were not spared of the wrath of the people. The defining battle cry of the activists was ash-sha’b yurīd isqāt an-nizām! (people want to bring down the regime).

However, as the US and its Western allies tried to reorder the frozen geography of the Middle East post the dismemberment of the Ottoman Empire after the First World War, it unleashed tectonic forces that had been brutally repressed by the dictatorial and monarchical forces across the Arab World for close to a century. One of the inadvertent consequences of this attempted redesigning was the creation of the Shia Crescent that extended Iran’s reach and influence across the region without as much as firing a shot.

The term, Shia Crescent, refers to a swathe of areas that includes Lebanon, Syria, Iraq, and Yemen, and the Shia populations in each of those countries. Anchored by Iran, it embraces key surrogate groups, be it the Hezbollah, Hamas, Houthis, and southern Iraqi militias. It provides flexibility and leverage to Iran to operate unconventionally across the Middle East in its broader strategic interest. General Qassem Soleimani, the late commander of the IRGC-Quds Force, was the overlord of the Crescent. He almost singlehandedly built the network of relationships and alliances that allowed Iran to wield an enormous amount of influence.

The US deep state has now identified the Shia Crescent along with Xi’s Jinping’s stroppy China as the foremost national security challenge to continued American global hegemony. This in part may explain why the Americans handed over Afghanistan to a Sunni Taliban virtually on a platter after bashing them for 20 years.

Though the Americans and even the Afghan defence forces claim that most of the state-of-the-art weaponry was disabled, that is not what many serious strategic thinkers are willing to accept at face value. The American objective of thus creating a countervailing hardline Sunni force in the form of the Taliban living cheek by jowl with Iran, the driving force of Shia resurgence in the region, is, therefore, not very difficult to absorb.

Where does that leave India and other nations in this post-Taliban arc of turbulence? They all need to look for civilisational allies sandwiched as they are within conflicting idioms of pan-Islamic fundamentalism and a belligerent Confucian order.

It is in this context Prime Minister Modi’s visit to the dominant seat of spiritual Anglo-Saxonism, the Vatican, and India’s participation in the nascent Western Quad need to be analyzed. The Western Quad is in its essence is a US (read Anglo-Saxon)-Israel (read Jewish)-India (Hindu according to the RSS-BJP) alliance with a co-option of those forces in the Muslim world represented by the UAE who fear both politically regressive and theologically puritanical Sunni impulses on one hand and the continuing aggressive Shia resurrection on the other. Is “a” Samuel Huntington redux the correct way to acquire both equilibrium and leverage in a deeply divided world that continues to roil? Only time would tell.