Long the front-runner in the race to replace Boris Johnson, Ms Truss is the Conservatives’ fourth Prime Minister since the 2015 election 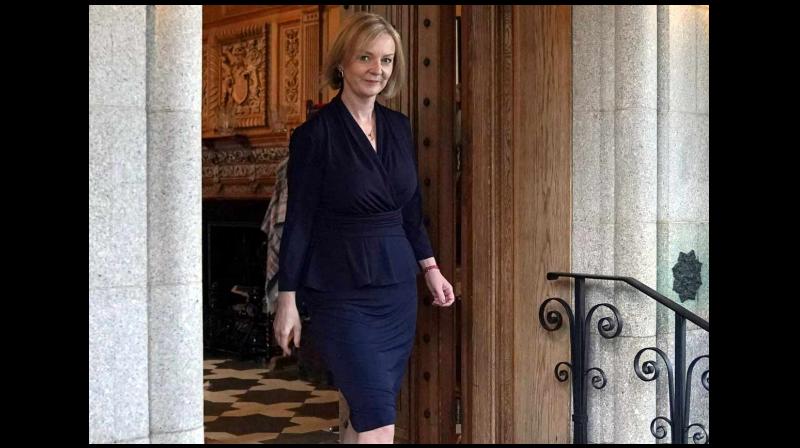 Britain's Prime Minister and leader of the Conservative Party, Liz Truss, leaves from Balmoral Castle in Ballater, Scotland, on September 6, 2022, after meeting with Britain's Queen Elizabeth II and being invited to form a Government. (Photo: AFP)

Hurtling from one crisis to another, Britain has chosen a new Prime Minister whose ambition has seldom been reined in by principle. The 47-year-old foreign secretary, Liz Truss, was an ardent Lib Dem when liberal democracy was fashionable. She campaigned for a republic when the monarchy became unpopular. She voted to remain in the European Union in the 2016 referendum until the Brexit tide swept away all her convictions.

Long the front-runner in the race to replace Boris Johnson, who finally quit amidst a flurry of scandals in July, Ms Truss is the Conservatives’ fourth Prime Minister since the 2015 election, having defeated the ethnic Indian Rishi Sunak, former chancellor of the exchequer, in a final showdown in a long, bitter and bruising contest. With winter fast approaching, Britain now faces what is forecast to be a long recession triggered by soaring inflation which hit 10.1 per cent in July.

Ms Truss’ habit of changing tack makes it difficult to predict how she will cope with the challenges that await her now. The irony is that no great ideological divide separates her from Mr Sunak. Both are proud to belong to the Tory right wing; both boast of their lineage from the indomitable Margaret Thatcher, who has replaced Winston Churchill as the Conservatives’ icon even though others remember her as the Iron Lady who forced a war on Argentina and deprived schoolchildren of their milk ration, thereby gaining the sobriquet of “Thatcher the Milk Snatcher”.

With so little to choose between the two contestants, it is difficult to avoid the suspicion that race and colour played some part in the ultimate choice. The vote was confined to about 160,000 Conservative Party members, and it is assumed that they -- especially the countrywomen among them -- preferred a blonde woman with a peaches and milk complexion and an English name with whom they could identify to a slick foreign-looking billionaire who took his parliamentary oath on the Bhagavad Gita, performs gau puja, and drapes a saffron scarf round his neck. Mr Sunak’s parentage -- India to Kenya/Tanganyika and thence to England -- may also have seemed remote to many middle-class Britons while the fact that he retained his American Green Card even as Britain’s chancellor of the exchequer may have suggested a certain lack of loyalty. This can only have been compounded by his billionaire wife Akshata’s “nom-dom” status which enabled her quite legally to avoid many British taxes.

Even the wealth of the Sunaks set them apart, for they were obviously not “gentry” as the British understand the term. They were new rich, and that is always looked at askance in the countryside where Tories rule the roost. Ms Truss in contrast was one of their own, although Mo (Mohammed) Hussein, former Prime Minister David Cameron’s ethnic South Asian chief press officer, used the words “cunning” and “wiliness” when discussing her on television. However, he did not necessarily apply them to her but indicated that she would need both to cope with the daunting problems awaiting her.

The flexible Ms Truss has so far avoided offering specific remedies. But with the economic outlook steadily worsening, supporters of her small-state, low-tax plan hope she will stay the course, especially with the Ukraine war sending living costs soaring.

Britain’s energy regulator Ofgem has warned amidst the spate of railway and bus strikes throughout the country that this winter’s domestic electricity and gas bills might be three times as high as last year’s. No one knows how Ms Truss means to help the millions of people who may tip into poverty for she refuses to explain how she would structure any new state support beyond tax cuts.

Sometimes she contradicts herself. Writing in the Daily Mail, Ms Truss promised “immediate support” if she becomes Prime Minister, but told voters later that although energy prices are a “massive issue” for people, “what isn’t right is to just bung more money into the system”. This harks back to Lady Thatcher’s preference for tax cuts over what she dismissed as “handouts”, meaning any form of social security or welfare.

Her views are endorsed by Eton and Cambridge-educated Kwasi Kwarteng, a Tory politician of Ghanaian origin who served with her under Mr Johnson. At the time of writing, Mr Kwarteng is expected to be her chancellor of the exchequer. He too has hinted at further measures without giving any details but he did try to calm the markets by saying in an article in the Financial Times that “some fiscal loosening” would be necessary under Ms Truss although her administration would act in “a fiscally responsible way”.

One reason for secrecy may be that Ms Truss’ supporters do not agree on how far she should go, except possibly in containing China. Britain lags behind other European countries in its support for consumer energy bills, which the Labour Opposition blames on a “zombie” government unable to act while the Conservatives ran their leadership contest. In May, the government promised a £15 billion package to help households with energy bills as part of its £37 billion cost-of-living support scheme. But this is not enough. Italy has budgeted more than 52 billion euros ($51.75 billion) so far this year. France caps increases in electricity bills at four per cent and the German government says it would spend at least 65 billion euros to shield consumers and businesses from inflation. In Britain, however, a pledge to review the remit of the Bank of England without surrendering its independence prompted some investors to dump the pound sterling and government bonds.

In the face of such evidence of European concern, Ms Truss’ inaction would be interpreted as indifference. Aware of this danger, she has promised to produce a plan to tackle rising energy bills and securing future fuel supplies within a week. These are of course early days but there is no glimmering as yet of the shape, size and scope of any such plan. Nor any indication of how such a plan can be reconciled with her other promise to challenge convention by scrapping tax increases and slashing levies while also avoiding the danger of fuelling inflation.

Ms Truss’ promised week for reforms is a long time in politics, as Harold Wilson once famously said. He was Labour and can therefore be ignored. But even the Tory week has started ticking while the tough-talking new Thatcherite Prime Minister dreams of a strong and outward-looking “Global Britain”.