For Shivakumar, arrest opportunity in disguise

With 105 of the 224 Assembly seats in its kitty, BJP leaders knew that it would not be long before it came to power in its southern citadel. 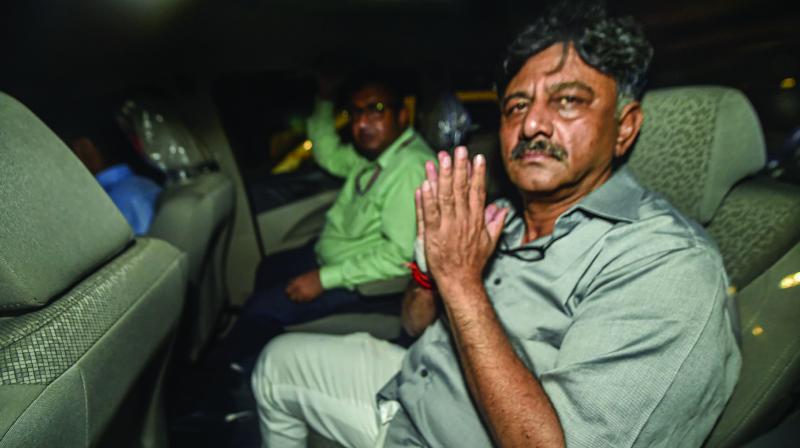 When leaders outgrow their soil and their people and acquire a large-than-life image, they become the cynosure of all eyes — even those of their fiercest rivals. Perhaps, this explains the curious case of former Congress minister D.K. Shivakumar, who is now cooling his heels in a Delhi police station in a money laundering case and is considered by many as the heir apparent of the undisputed king of Karnataka’s Vokkaliga community —the Janata Dal (S) leader and former Prime Minister, H.D. Deve Gowda — who is the Congress’ biggest rival in its Mandya-Old Mysuru stronghold.

Interestingly, just before the recent Parliament elections, during a BJP core committee meeting in the state, party national president Amit Shah had stated that there was no need to conduct an “Operation Lotus” to bring down the JD(Secular)-Congress coalition government as it would fall on its own due to the bickering between the Deve Gowda family and former Congress chief minister Siddaramaiah. All that mattered was deciding whether the BJP should form the government in such a situation.

The second and more pertinent point made by Mr Shah was that the BJP was a formidable force in Karnataka but there were some unfinished tasks when it came to building the party. What he had in his sights was the vast, Vokkaliga-dominated Old Mysuru region where Mr Shivakumar held sway.

The message was more than clear — the rising star of Vokkaliga politics should either be in the BJP fold or... be demolished politically. The pitched battle for grabbing the Vokkaliga heartland had only just begun.

Mr Shah and other national BJP leaders had already felt the heat when Mr Shivakumar handled the Gujarat MLAs during the Rajya Sabha elections in which the Congress’ Ahmed Patel was a candidate. He shone once again during the by-elections in five constituencies in Karnataka in 2018, and most so in Ramanagara, where Anitha Kumaraswamy, wife of then chief minister H.D. Kumaraswamy, was the JD(S)-Congress coalition candidate. The BJP picked Chandrashekhar, son of former member of legislative Assembly C.M. Lingappa, an arch-rival of the Deve Gowda family, to take her on, but just two days before voting, Mr Shivakumar ensured that Mr Chandrashekhar retired from the contest leaving the BJP red-faced!

In the same election, Mr Shivakumar delivered a shock to popular BJP leader Mr Boya Sriramulu by leading the Congress to victory in his backyard, Ballari, defeating Mr Sriramulu's sister Joladarashi Shantha. He also foiled the BJP’s attempts — until recently — to poach on Congress legislators by resorting to his own “Operation Lotus” and holding the flock of rebel MLAs together.

With 105 of the 224 Assembly seats in its kitty, BJP leaders knew that it would not be long before it came to power in its southern citadel. Nor did Mr Shah ever doubt the ability of the Karnataka BJP to deliver over 22 Parliament seats with the final figure an impressive 25.

But when it came to voting patterns in the Assembly polls, things were not so rosy. The BJP was finding it hard to cross the half-way mark in the Assembly on its own. The biggest hurdle was the voting pattern in Vokkaliga-dominated Old Mysuru, which had always shied away from the BJP and tilted towards the Congress and JD(S).

The Vokkaligas were sceptical about the Lingayat-dominated BJP. The traditional rivalry between Vokkaligas and Lingayats, the two dominant communities in Karnataka, dates back to state reorganisation in the 1950s when Vokkaligas opposed the concept of Akhanda Karnataka fearing that the numerically superior Lingayats would dominate the political as well as economic landscape.

Soon, the inevitable happened with Vokkaliga CM Kengal Hanumanthaiah brought down, ironically with the help of a fellow Vokkaliga, Kadidal Manjappa, who, however, did not survive long with Lingayat leader S. Nijalingappa becoming CM in no time. Nijalingappa later made way for Devaraj Urs after the Congress split and the Lingayat vote shifted to the Janata Parivar. But with Vokkaliga titan Deve Gowda becoming the patriarch of the community and the Janata Parivar, the Lingayats did what was expected of them — move to the BJP.

With Mr Deve Gowda now in his eighties, the Vokkaligas have started looking around for a mascot and who else fit the bill but the dynamic and bellicose D.K. Shivakumar, who interestingly had fought the Gowda family for over three decades. The enmity was finally forgotten when the Congress and JD(S) came together to form a coalition government last year and Mr Shivakumar became the troubleshooter of the coalition.

His rivals admit that it is his ability to work with his enemy’s enemy which makes Mr Shivakumar such a formidable foe but this has also proved counterproductive. While handling Congress politics in Belagavi, he supported Lakshmi Hebbalkar (now an MLA) and incurred the wrath of the powerful Jarkiholi brothers. The rest is history with dissident Congress MLA Ramesh Jarkiholi leading the rebellion against the coalition government leading to its recent downfall.

The BJP did try to get Mr Shivakumar into its fold, knowing his ability to manoeuvre his party out of any difficult situation, and his deep pockets. But Mr Shivakumar had his eyes on loftier goals — something he would never achieve in the Lingayat-dominated BJP — the CM’s post itself. When the BJP realised that getting him into the party was next to impossible, they resorted to the only possible tactic — target his financial deals and soon, the Enforcement Directorate was on his tail ensuring his arrest in a money laundering case.

But has the party erred in underestimating the fallout with the Vokkaliga community uniting in support of the beleaguered leader? Going by the raging protests across the state after his arrest, there are many who feel the BJP may have overstepped its bounds and burnt its fingers, losing whatever chance it had of gaining a strong foothold in the Vokkaliga heartland.

Even a senior Congress leader like Mallikarjun Kharge who had his reservations about him has rallied behind Mr Shivakumar. After news of his arrest broke out, Mr Kharge dashed to New Delhi to extend moral support. Every Congress leader worth his salt has dubbed Mr Shivakumar’s arrest as political vendetta and the anger could well turn into a unifying force for various Congress groups across the state.Right now, the BJP is sitting pretty with the Congress strongman behind bars. It would be a bit too early to predict what the future holds for Mr Shivakumar — will he rise like the proverbial phoenix to shatter the BJP’s hopes or crumble before the might of the saffron machinery? Either way, it is his time in the limelight.