At 2+2 talks, Pak the elephant in the room

India needs to be much more nimble-footed to outmanouvre Pakistan’s newly-reinforced civilian-military government. 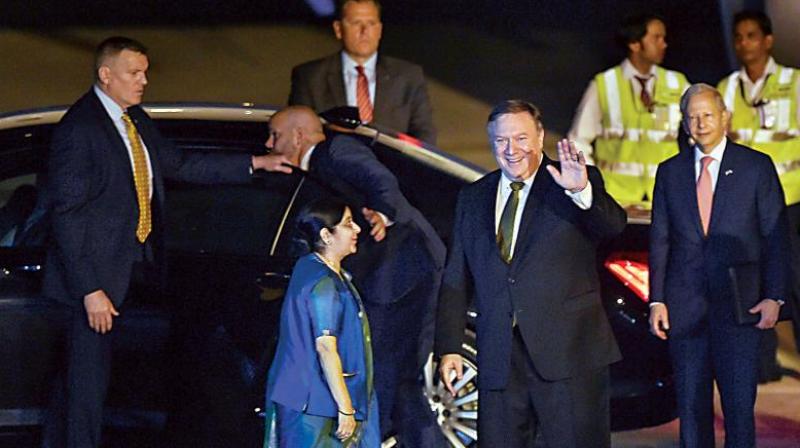 Jalaluddin Haqqani has been dead and buried for almost four years, and yet 24 hours before the arrival of the United States secretaries of state and defence in New Delhi and Islamabad, the Taliban have announced the demise of the 71-year-old Afghan who had headed the Haqqani Network in all but name these past 10 years.

Neither US secretary of state Mike Pompeo nor defence secretary James Mattis, who has served in Afghanistan, and chairman of the US joint chiefs of staff Gen. Joseph Dunford will allow the Pakistani military to pull the wool over their eyes with this ploy; given the sustained attacks by the Taliban — and the Haqqani Network led by his 11 sons — across Afghanistan. It took the combined forces of the ill-equipped Afghan National Army and the US forces to wrest the city of Ghazni from their clutches, in the face of a month-long war of attrition that the Taliban had waged through August across the country, against hapless Afghan civilians, schoolchildren and the Shia faithful, with Taliban forces freely using the porous border with Pakistan as refuge.

The Haqqani Network has long been declared a terrorist organisation. Therefore, announcing the demise of a man who hasn’t actively led the group even as it continued to talk peace while waging war, will only serve to reinforce American doubts about Pakistan’s real intent.

Mr Pompeo, a former CIA director, will be less than impressed by the fiction that the Taliban, a Pakistani proxy in the Afghan theatre, was willing to hold talks with the US when in fact Washington knows fully well that it has been played. The pointless Doha dialogues in the Qatari capital being the perfect example of Pakistan’s perfidy.

The Pompeo-Mattis stopover in Islamabad to meet Pakistan’s new Prime Minister Imran Khan is expected to see the US deliver a tough message to Islamabad to call off the dogs of war in Afghanistan, quick on the heels of the announcement that it was scrapping $300 million in aid to cash-strapped Pakistan. It is lost on no one that it is Imran Khan’s home state of Khyber-Pakhtunkhwa (KP) that is in the crosshairs given that the Haqqanis and a legion of other terrorist groups propped up by Pakistan’s military-intelligence complex are based there. Mr Khan’s new team may perpetuate the fiction that it wants better ties with New Delhi and Kabul, but few in either capital really believe this is so.

Not even the fresh story that is being built around Pakistan’s Army chief Gen. Qamar Javed Bajwa — that he is “soft” on India and that his “outreach” to New Delhi has hit a wall — is likely to fly either.

Mr Khan’s invitation to his friends in the Indian cricketing fraternity to his swearing-in may have been more personal than state, but it did give rise to speculation in some quarters that there was more to the invitation to cricketer-turned-politician Navjot Singh Sidhu than meets the eye. His hearty embrace of Gen. Bajwa at the event was, of course, trolled by the BJP, of which the political maverick Sidhu was once a card-carrying member. But, in the face of the completely over the top brouhaha over the hug, one wonders whether it was to scotch any speculation that he was, in fact, carrying a message from Prime Minister Narendra Modi to the new civilian face of Pakistan or maybe even the man in uniform, who actually calls the shots? And whether Sidhu had even brought a message back for Prime Minister Modi?

The giveaway that there was more to the Sidhu visit than meets the eye came when various members of Imran Khan’s new Cabinet began making all the right noises. Imran’s information minister Fawad Chaudhry, the seasoned foreign minister Shah Mehmood Qureishi and his savvy finance minister Asad Umar, realising that stability was the key to wooing the IMF for a much-needed $9 billion infusion, have been spinning the story that Pakistan wanted better ties with India, and that India’s 2019 parliamentary election was the reason that Prime Minister Narendra Modi was unwilling to move forward on talks. Any breakdown of dialogue would play into the hands of Mr Modi’s critics, who have already cited his impromptu Lahore visit in 2015 as the reason that Pakistan’s military unleashed an Uri and a Pathankot on the Indian Army, closing the doors to dialogue. How either Chaudhry or Qureishi know there was even a Narendra Modi reaction to Gen. Bajwa’s “outreach” is of course the big question.

Either way, the Pompeo-Mattis visit to New Delhi and their interaction with the forceful female duo of external affairs minister Sushma Swaraj and defence minister Nirmala Sitharaman will see some plain talking by India on Pakistan’s active destabilisation of its borders — in Afghanistan, heading for parliamentary and presidential polls, and in dire need of both US and Indian hand-holding, and where Pakistan wants to keep India out at any cost; and India’s own Jammu and Kashmir state, where the unrest, albeit due to its own ham-handedness, has given the Pakistani military ever more fertile ground to play mischief.

India needs to be much more nimble-footed to outmanouvre Pakistan’s newly-reinforced civilian-military government, which will pull every Haqqani rabbit — dead or alive — out of their hat to ensure that the US continues to keep them afloat, particularly as their “all-weather friend” China re-examines Pakistan’s continuing support for terror groups that destabilise not just its immediate neighbourhood but its own internal polity, where Chinese investments are at risk.

As the much touted India-US “2+2 dialogue” gets under way on Thursday, with Delhi’s foreign policy mandarins focused on finding a way around persuading the Washington heavyweights to shift their stance on imposing the Countering America’s Adversaries Through Sanctions Act, over India’s purchase of the S-400 defence system from Russia, and making them understand its inability to cut imports of cheap Iranian oil in the face of rising prices of crude, Pakistan’s active espousal of terror will be the elephant in the room.