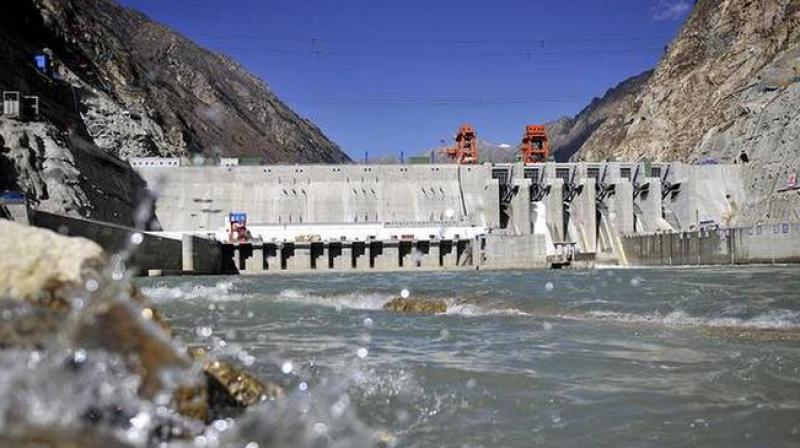 The YarlungTsangpo, which becomes the Siang on entering Arunachal Pradesh and later the Brahmaputra in Assam (and the Meghna in Bangladesh) is one of the most eco-sensitive regions of the planet. (Representational image: AFP)

Recent developments not far from the India-China border in Arunachal Pradesh are worrying. On March 29, Dave Petley, pro vice-chancellor (research and innovation) at the University of Sheffield in Britain noted on his blog: “I received an email from GöranEkstrom of Columbia University making a small group of us aware that he had detected, using seismic instruments, a probable large-scale landslide in the vicinity of the YarlungTsangpo in Tibet… an idea of the mass (in this case about 100 million tonnes-- a very large one indeed).”

Whether it was triggered by an earthquake in this highly seismic area, is still not clear; it could also be due to torrential rain.

Mr Pethley further explained: “Either way, at YarlungTsangpoit is clear that a large amount of rock and ice have detached from the east side of the tributary valley, moving westwards and then to the south. Once again this has formed a catastrophic channelised flow that has travelled down the channel to deposit a large volume in the main channel.”

The YarlungTsangpo, which becomes the Siang on entering Arunachal Pradesh and later the Brahmaputra in Assam (and the Meghna in Bangladesh) is one of the most eco-sensitive regions of the planet.

In a communiqué released during the sessions of the National People’s Congress (NPC) in early March in Beijing, the Communist Party of China reiterated that according to the 14th Five-Year Plan (2021-25) and the Long-Range Objectives Through the Year 2035, adopted by China’s top legislature: “The construction of key projects, such as the Sichuan-Tibet Railway and hydropower development on the YarlungTsangpo River, will be promoted.”

It practically means that a giga hydropower plant (HPP) will be constructed at India’s gates, on the YarlungTsangpo river.

The Chinese media also reported that Che Dalha, chairman of the Tibet Autonomous Region,urged the authorities to accelerate the project and to immediately undertake all the comprehensive planning and necessary environmental impact assessments.

Will the Chinese “scientists”take into account the presence of tens of thousands of trucks and GCBs moving earth around and changing the shape of the mountains and the rivers north of the Indian borders? Probably not.

It appears to be a matter of the Emperor wanting to show the world that he can construct a HPP of thrice the capacity of the Three Gorges Dam, with little consideration for the environment.

The new plan, submitted to the NPC for approval, provided “the green light for the dams to be built on the lower reaches of YarlungTsangporiver”.

Later adopted by the Chinese legislature, it called for “a hydropower base on the lower reaches of the YarlungTsangporiver, along with clean energy bases in the upper and lower reaches of Jinsha river”, known as the Upper Yangtze in Sichuan province.

On the occasion of the Chinese New Year, President Xi Jinping called the Communist Party “a gigantic vessel that navigates China’s stable and long-term development” and stated: “Upholding the principle of putting people first and remaining true to our founding mission, we can break the waves to reach the destination of realising the great rejuvenation of the Chinese nation.”

Like any Emperor, Xi Jinping needs to think big.

The Seventh Tibet Work Forum (TWF), a large meeting which decides the fate of Tibet for the years to come (to which Tibetans are rarely invited), was held in Beijing on August 28-29, 2020. It was a crucial event not only asit concerns the fate of the Roof of the World, but for the Indian border too.

Some massive projects were announced soon after; first, the Pai-Metok (Pai-Mo) Highway linking Nyingchi to Metok, north of Upper Siang district of Arunachal Pradesh, which should open in July 2021.

After the completion of the highway, the length of the road from Nyingchi City to Metok County will be shortened from 346 km to 180 km and the driving time will be shortened from 11 hours to 4.5 hours. Though only 67 km long, in strategic terms the highway will be a game changer and greatly accelerate the developments of new model villages, and therefore relocation of populations on the border. But, more important, it will pave the way for a mega HPP.

In December 2020, Global Times had announced Beijing’s plan to build a cascade of mega dams on the YarlungTsangpo.

The Metok County government confirmed that the project would be built north of the Indian border, while Global Times added: “The head of Power Construction Corp of China (POWERCHINA) suggested the planned hydropower station -- which is expected to have three times as much generating capacity as the world-leading Three Gorges power station -- aims to maintain water resources and domestic security.”

A series of nine hydropower plants in cascade will definitely threaten life across the whole of India’s Northeast region.

Metok is the last small, but strategic town located near the Great Bend of the YarlungTsangpo, north of the McMahon Line.

Though there is no proof that the mudslides on March 22 were directly linked to the dam project, the fact remains that the entire area is environmentally extremely fragile.

And that’s not all; already in 2016, China Daily reported the construction of a 1,629-km Sichuan-Tibet railway. It has now entered a crucial phase.The railway will be connecting Chengdu in Sichuan to Lhasa; the new rail line will shorten the travel time to less than 15 hours.

The Lhasa-Nyingchi section is scheduled to be opened in July.

All this will have incalculable strategic implications for India as the train will pass near the Indian border where the hydropower plant is located.

These two projects (HPP on the YarlungTsangpo and the Sichuan Railway) are directly affecting India’s security.

For India’s frontiers,China’s“dual-use” (civil and military) infrastructure development will take place on a much larger and faster scale than today; a great tragedy in the making.

How will the mandarins of South Block react?

They will probably try to keep the information under the carpet for as long as possible. But if they wait too long, it may be too late. Remember the Aksai Chin road in the 1950s.