Raja Karthikeya
Raja Karthikeya is working on a book about how individual decisions in the face of adversity impact all of society.

With out-of-work Uber drivers turning to home delivery, somedays your pizza arrives in a Mercedes Benz 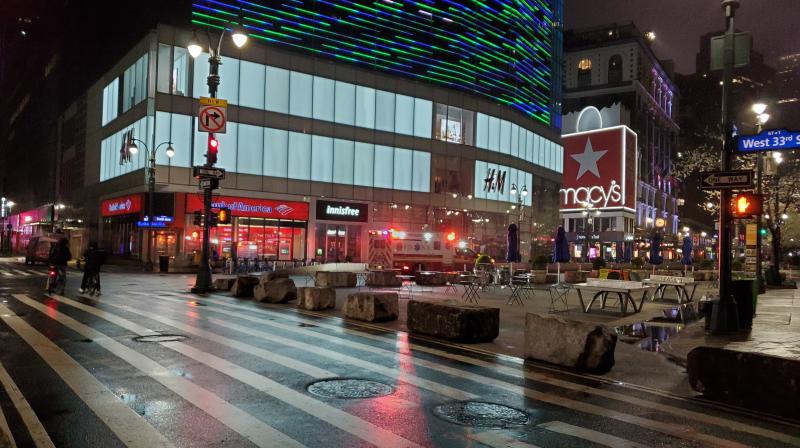 New York will survive Covid-19, and herself, just yet. (Photo: Raja Karthikeya)

The numbers are frightening from every perspective. The city’s paramedics are receiving 50 per cent more calls per day for ambulances, unseen since the 9/11 attacks.  Over 1,000 men, women and children are dead in just two weeks and over 41,000 are fighting the virus. There is no space left in the mortuaries any more and trucks used to transport frozen goods have been converted to store the dead. Hospitals are so overwhelmed that a medical camp has been put up on the lawns of the iconic Central Park in Manhattan to treat patients and a 1000-bed US naval ship has just docked in the city. Nurses are describing their work to the media as a “suicide mission”.

The city’s medical and paramedical staff are overwhelmed and the governor of the state which prided itself as a mecca of medical tourism has been forced to appeal to medics from other states to come in. Some universities are graduating final-year medical students early to make up for the shortage of doctors. All surgeries in the city have been halted and all possible resources focused on treating Covid-19 patients.

New Yorkers don’t like staying indoors. No other city has such a density of bars, cafes and restaurants and the citizens are proud of their culture of eating out. And now, everything is shut from malls and movie theaters to bars and restaurants (with exceptions for home delivery).Talk of a quarantine over the entire city has been dismissed and it’s not officially called a lockdown, and yet it is one in every sense of the word. Thousands of New Yorkers have already left the city. And those in the city are trying their best to practise social distancing.

A lockdown would go against the city’s cherished ideals of personal liberty, but it would probably also be hard to enforce in the current conditions. With over 800 officers of the New York Police Department now diagnosed with the virus, it is clear that acting through decree is not going to be easy. What is happening now is a slow but firm nudge to the citizens to stay at home. The public transport system has just been cut by a quarter. It is hoped that with less metro trains and buses plying, the virus has less means to spread and that more people would stay home too.

Healthcare is an important political issue, especially so in an election year. The political tensions over healthcare between the federal and state governments are playing out on TV screens. In states like Rhode Island, police are searching for people from New York for potential quarantines. In other states like Florida, there is talk of turning back vehicles with New York licence plates and of not allowing anyone from New York to fly in. Suddenly, New York – the grandest brand on earth - is an identity you want to conceal while on the road.

In a city where people pamper their pets more than children and where apartments can feel like walk-in closets, walking one’s dog has become a popular excuse to step out of the house. Staying at home feels burdensome in this city, which has a disproportionately large number of people living alone, and where privacy sensitivities are such that most people don’t know their neighbours. In these conditions, to step out or to stay in has become a choice between covid-ophobia and claustrophobia.

At night, the streets of this fabled city are deserted. Broadway is closed. Times Square’s neon signs flash ads but there is no one around to watch them. The fog and periodic rain that have beset the city since the start of the crisis have not left altogether, and the cold, wet alleys winding around skyscrapers remind one of Gotham. But neither Godzilla nor King Kong nor the Avengers’ enemies – all of whom attack New York on the big screen – could have sowed the kind of panic that Covid-19 has managed in a span of just two weeks. Where people once literally rammed into you on the sidewalk as they hurried to their destinations, today they do a sharp detour and walk ten feet away from any other human being – afraid of catching the virus. The paranoia induced by the pandemic is palpable. There are already stray reports of hate crimes against people of Asian origin. A friend got a call from his building manager enquiring if he had the virus…just because the friend had visited a hospital about an injured arm.

The economic impact of the virus is becoming apparent. Mortgage payments have been suspended but some politicians are also calling for suspension of all rent payments. In a city known for its no-dream-is-too-distant mindset and known as the hub of the gig economy, many people work two or three jobs to make ends meet. And these are likely to be the worst affected by the crisis. The poorest neighborhoods of the city – especially its outer boroughs – already appear to be hardest hit because after the news of the virus spread in mid-march, the poorest residents continued to use public transport to get to their jobs in the city most of which involve physical labour, even as those with white-collar jobs in the city started telecommuting. As a result, New York has an unusually large number of young patients of the virus because of the demands of their livelihoods appear to be exposing them to the virus even as richer and older residents are managing to stay safe.

How did the richest city in the world come to this point? In a city where, for the right price, you can get absolutely anything ever made by man, how is it conceivable that pharmacies refuse to sell more than one small bottle of hand sanitizer per customer irrespective of the price they’ll get for it? Why are pharmacies out of paracetamol and hospitals splitting ventilators between patients? No one is quite sure who to blame. A health administrator told me that for years now, increasingly corporatized hospitals had been following the ‘Just-In-Time’ inventory control practice championed by management gurus. While this practice helped the hospitals with their bottom-lines and show larger profits, it left them helpless in the face of a public health crisis when their overseas supply lines broke down following border closures and restrictions in export of medical goods in countries across the world.

There is now talk of the need for “Healthcare security” – self-sufficiency in healthcare resources – similar to the concept of energy security that was born of the oil shock of the 1970s. The city’s healthcare system should have been better equipped for this crisis, say some. Yet others aver that the problem is not with the healthcare system, and that New York’s disproportionately high number of cases are a result of a toxic cocktail of the large number of tourists it receives, the high density of its population, and years of neglect of public sanitation.

Amid the signs of fear and chaos, humour continues to be the best remedy. The mad rush to buy anti-bacterial wipes and hand sanitizer may be somewhat understandable, but no one is quite able to solve the case of missing toilet paper in supermarkets across New York. A lot of creativity has gone into inventing hasty replacements for the handshake – from elbow bumps to feet bumps, from a restrained wave of the hand to a Namaste. With many out-of-work Uber drivers turning to home delivery to sustain themselves, somedays your pizza arrives in a Mercedes Benz. The video chatting app, Zoom, has become a leitmotif of this “corona era”. As one joke goes, babies born as a result of the 2020 lockdown will likely be called Baby Zoomers!

New York will survive Covid-19, and herself, just yet.