Is society moving to the right?

Lots of underlying developments are taking place that appear to contradict the idea of a society tottering on the brink of Islamism. 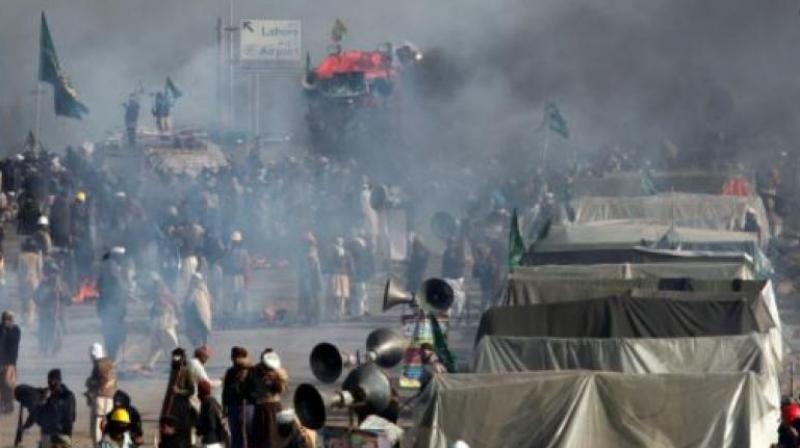 Demonstrators protest as police fire tear gas shells to disperse them during a clash in Islamabad, Pakistan. (Photo: AP)

Is Pakistani society becoming more radicalised or intolerant with each passing day? The question pops up after we see fellow citizens endorse violence or threats of violence by fundamentalist groups. Most observers feel we reached a conclusive answer (yes, we’re doomed) after Salmaan Taseer’s assassination, when large segments of the urban, social media-using population engaged in celebration, apologia, or whataboutery of epic proportions.

Similar views have been witnessed after other such events, including the latest one in Faizabad. At a deeper level, some point to the popularity of diffused forms of religiosity as clear indications of the median shifting at least towards greater conservativism, if not radicalisation.

Every now and then, however, someone points out that this trend might not be as linear. Lots of underlying developments are taking place that appear to contradict the idea of a society tottering on the brink of Islamism. Popular examples include the growing space for women in public life through education and the labour market, continued growth in the urban entertainment industry, which includes film, music, and television, and sporadic growth of lifestyle liberalism in facets such as life choices, inter-gender relations, and leisure time activity.

Both sides of this debate draw on some concept of majoritarian rule, implying that the cultural values and aspirations of the largest chunk of our population will end up reflecting themselves through the state and its legal framework.

Pessimists predict that the overall trend is towards a theocracy empowered by the acceptance of radical ideas among large swathes of society. The (lukewarm) optimists suggest that our ethnic and communal make-up will ensure no one brand of Islamism ever wins out. There are empirically valid points in both camps, which is not surprising given Pakistan is both a country of over 200 million people and is experiencing significant social and demographic change.

If 2017 is our starting point, we’re already covered a great deal of distance towards becoming discriminatory and intolerant. There are laws banning people from practising faith on their own terms, and others that perpetuate vigilantism. None of these laws are the outcome of majoritarianism in the traditional sense. There were no elections or referenda fought on these precise changes. Instead, it was the state elite — politicians and military personnel — championing these changes or agreeing to their demand by others. This particular pathway of winning ideological battles has proven to be quite successful in Pakistan. All you need are a few thousand followers, which enterprising extremists almost always have, and a phrasing of your pet cause in a way that resonates with the basic religious sentiment of enough people.

The Faizabad dharna provides a good case study of this phenomenon. There was no actual issue at the heart of this three-week long contention. Instead, we had a range of rumours and half-truths regarding what the government had tried to do through its legislative amendment. These rumours were repeated across television channels, social media, and through mosques and madressahs till they became, for all intents and purposes, the truth. Once this new, volatile truth fell in place, the entire issue became one of expediency and damage control.

For their part, religious extremists have done well in either capturing little pockets of ideologically motivated voters across the country, or creating the perception that they can potentially swing some constituencies. This explains why appeasement of protesters was the first instinct of different members of the ruling party, including the chief minister of Punjab and, subsequently, why Opposition parties steered clear of condemning.

Out of this toxic combination of lies, expediency, and street protests emerged a great deal of media attention, a minister’s scalp, and an agreement that elevated a bunch of ideologues to the position of valid stakeholder. It also reaffirmed certain red lines as far as the institutional and legal makeup of our state is concerned.

The mechanisms used to establish new limits and then push them further to the right are grounded in who can shout the loudest more than anything else. Working in their favour is the fact that there is no one to shout back. Political parties are either scared, selfish or ideologically complicit. There are no civil society organisations capable of laying siege to Islamabad in the name of tolerance. Nor are there any progressive groups who can swing even a handful of constituency battles. The game is now rigged in a way that it can only muddle further to the right, because any attempt in the other direction will be defeated through violence, protest and self-serving opposition.

To go back to the original debate, asking whether most Pakistanis actively want to live under a state run by fundamentalists is increasingly irrelevant. Fundamentalists themselves have decided they do want to run both state and society. And to their sordid credit, they’ve found a way to do so that doesn’t involve winning elections or the hearts and minds of some amorphous majority.