The corporate endgame: Why honchos get felled

Corporate honchos and movie stars are as lonely as friendless hobos. 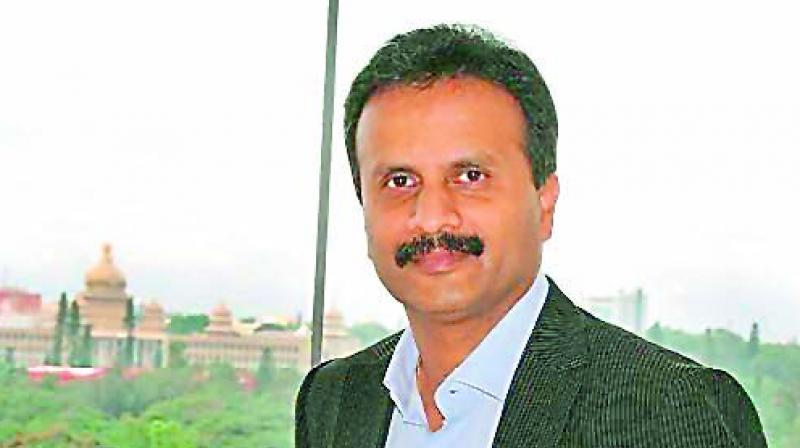 V.G. Siddhartha’s story is the distressing tale of aspirational entrepreneurship in uncertain times.

Who can imagine the demons in a person’s mind which push him to end his life? Nor can one be privy to the dull pain of the inevitable, unnecessary guilt, in the minds of family and friends — whether doing something different could have prevented it.

Remember the 2018 Rajkumar Hirani multi-bagger biopic Sanju, about the escapades of star Sanjay Dutt. A drug-befuddled Ranbir Kapoor (Sanju) is about to end his messy life by jumping from the terrace of his penthouse, only to be stopped by Diya Mirza (Dutt’s third wife Manyata) who holds up his son — why is it always a son? — and pleads that jumping is not going to help the family, who will continue to carry the guilt for life. Dutt lives on. Alas, if only real life was as well-timed as the reel version!

Corporate honchos and movie stars are as lonely as friendless hobos. They use the inertia of activity to fill the gap. Adulation from admirers and fans helps too. Over time, possibly, it becomes a habit not to talk, particularly about the “hero’s” own weaknesses and troubling secrets.

The private sector has become increasingly leveraged and consequently that much riskier. Outstanding bank credit to corporates and individuals increased from 17 per cent of GDP in 2003 to 40 per cent in 2018. A prolonged economic downturn, as we are now going through, adds to the difficulty of servicing debt, because real interest rates have been high over the last five years. Entrepreneurs and investors, who had earlier assumed that inflation would substantially erode the real value of debt servicing, find themselves heavily over leveraged in a low inflation world.

Raghuram Rajan, the man with no permanent stakes in our cosy elite compacts, first fingered the banks in 2013 for encouraging the practice of “evergreening and rolling over bad debts”. We finally changed track in 2016 from reviving failing private companies to protect employment to encouraging banks to recognise their losses on stressed assets and restructure defaulting companies, including by selling out to new owners via the Insolvency and Bankruptcy Code.

But bankruptcy, as a business option, has yet to acquire the humdrum, process orientation that it has in more developed economies. Forbes, the magazine about and for the wealthy, is rightly blasé about bankruptcy.

Jeff Rose, a contributor to the magazine’s website, wrote on February 19, 2019 about the famous people who went bankrupt but survived to stage comebacks. One such was Abraham Lincoln, who invested in a store in 1833 which went under and was closed. Lincoln persevered over the next 17 years and repaid the loan of $1,000 and went on to become the 16th President of the United States!

Walt Disney, the iconic cartoon mogul who invented Micky Mouse, was above his nose in debt taken to make the cartoon movie Snow White. Luckily it was a hit, and he was saved from bankruptcy.

More recently, Elton John, the songwriter who penned and sang Candle in the Wind, his 1997 tribute to the late Princess Diana, the “Princess of Hearts”, went through a phase where bad real estate bets pulled him under. He survived to be knighted by Queen Elizabeth II and remains in business.

Rose speculates that those who had nothing before they acquire riches and fame are better able to adjust to downturns that those who start off with reputations to keep up.

Rural and middle-class India remains very traditional in its attitudes to debt. We conflate debt repayment with family honour and social prestige. Nearly 3,000 farmers kill themselves every year for relatively small amounts of unpaid debt. Some of this is because formal bank credit is difficult to access for small farmers. Consequently, private moneylenders proliferate. During the 2016-17 demonetisation-driven cash crunch, even street vendors turned credit providers to keep their business going whilst also obligating their regular customers.

The local moneylender is the first port of call for a small farmer in immediate need for money. It is only when the debt goes sour — not least because of usurious interest rates — that these “moneylenders” arrange a cooperative bank loan for the desperate farmer, from which they recover their capital. But without a supportive revenue model, debt just spawns more debt till the circle of life is complete.

V.G. Siddhartha, the much-admired founder of Café Coffee Day, came from a family of coffee planters in Chikmagalur in Karnataka, the state which grows nearly two-thirds of Indian coffee. After the early 1990s liberalisation of the coffee trade, the family became wealthy by branding, exporting and developing the downstream, domestic retail business of coffee as a trendy eco-system for the young and upwardly mobile. This aligned with the mushrooming of the techie world from the mid-1980s. His marriage to S.M. Krishna’s daughter in 1991 cemented the politico-corporate compact, often at the root of business success.

Diversification followed, into financial services (2000), realty and hospitality (2006) and logistics (2011). Siddhartha also acquired a substantial personal stake in an IT company, Mindtree. Debt was never in short supply and made possible the diversification and expansion of the retail coffee business. Over the last five years his flagship company CDE was consistently loss making. The cost of interest alone was 56 per cent of revenue.

It is unclear what happened between July 29, when V.G. Siddhartha was driven nearly 350 km from Bengaluru to walk along a bridge from where he disappeared, and July 31, when fishermen spotted the deceased in the turgid, rain-swept waters of the Nethravati river. Was the billionaire habituated to go off unaccompanied on such road trips? Was it normal for him to wander around in lonely places — in this case a bridge near Mangaluru? And is the letter left behind accepting full responsibility really his?

In the end, the “Coffee King” faced the same circumstances which haunt every cereal farmer venturing into commercial farming. The impulse is to take a fling, quite ignoring the 50 per cent probability that the bet will go wrong. Like any other son of the soil, he was possibly unable to accept the hand that fate dealt him.

V.G. Siddhartha’s story is the distressing tale of aspirational entrepreneurship in uncertain times. Sadly, rogues never flounder at such times, whilst the sincere ones are often unable to negotiate the endgame of business in a downturn.