Meghalaya has given a fractured mandate, but there is a clear story there — that the verdict has been anti-Congress. 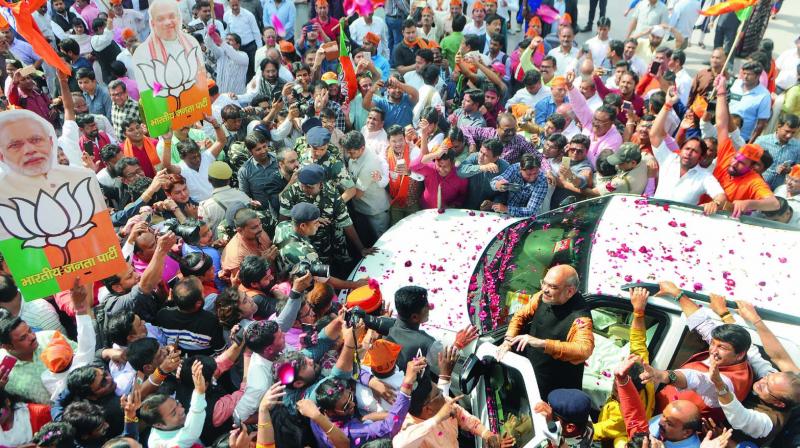 The verdict on the just-concluded elections in Tripura, Meghalaya and Nagaland has established three major points — the complete regionalisation of the BJP, making it a truly pan-India party; the relegation of the Congress from a position of dominance to that of a fringe player in the region; and the continued relevance of regionalism, as demonstrated by the fantastic performance of regional parties, in an area known for unique aspirations, even sub-national aspirations.

Going by how the BJP managed to sweep the CPI(M) away from its bastion in Tripura, the state it had ruled without a break since 1993, it is only natural to look at the saffron party’s election-winning strategy. It is actually simple: the BJP worked to a plan that began in 2015. The party despatched an RSS prahari from Maharashtra, Sunil Deodhar, 52, to stay put in Agartala and prepare the ground to oust the Left from the latter’s stronghold.

Mr Deodhar, an old RSS Northeast hand since the early 1990s, began with a social engineering exercise by getting leaders of indigenous groups and ethnic communities interested in the BJP. The narrative the party weaved was that of utterly poor development and progress and highlighted the flaws of the Manik Sarkar government. The resultant broader narrative that started catching the imagination of the masses was that of anti-incumbency. “Chief minister Manik Sarkar may have a clean image but he is presiding over a corrupt government” — was the refrain.

This approach worked, with the BJP (that fielded 51 candidates) winning 35 seats on its own, and its tribal ally, Indigenous People’s Front of Tripura (IPFT), winning eight of the nine seats it contested. The BJP spiced up the campaign by putting a dynamic new leader of the party, Himanta Biswa Sarma, a top Assam minister and convenor of the North-East Democratic Alliance (Neda), as its in-charge for the Tripura polls. Mr Sarma took Tripura by storm and his high-voltage, whistle-stop, hop-in-hop-out campaign style took the Communists by surprise. The Left had no one to match Himanta’s charisma in the vicinity.

The Left has been left far behind (it managed to win only 16 seats, down by 34 seats from its 2013 tally) in the battle of ideologies in Hindu-majority Tripura, but it hasn’t come as that big a surprise considering the poor law and order situation in Tripura and other factors. But what will the BJP’s critics say about Christian-majority Nagaland, where the party managed to win 12 of the 20 seats it contested, up from just one seat it won in 2013?

Why am I using phrases like “Hindu-majority Tripura” or “Christian-majority Nagaland”? This is because of the obvious charge or description the BJP’s rivals and critics reserve for the saffron party’s ideology as that of trying to push nothing but the “Hindutva” agenda, and the perception about the resultant polarisation on religious lines. That is a different debate, but it had its bearing on the Nagaland polls, with some churches issuing appeals to voters not to elect people who could become an affront to Christianity.

The Church’s diktat, however, had no impact at all. This is because the BJP refrained from raising anything touching on religion or issues relating to food habits that irked people across the country sometime ago. The only thing the BJP talked about in states like Nagaland was development and progress. Yes, BJP leaders in charge of Nagaland like Union minister of state for home Kiren Rijiju said it was important for the state to have a government with the BJP as a partner as it would help in an effective implementation of the Naga peace agreement as and when it is signed.

Significantly, the BJP had sidelined its ally of 15 years, the Naga People’s Front (NPF), and entered into a tie-up with the Nationalist Democratic Progressive Party (NDPP), headed by former chief minister Neiphiu Rio, an erstwhile mover and shaker of the NPF. This was just weeks before the election on February 27. But NPF leader and chief minister T.R. Zeliang said soon afterwards that the BJP-NPF alliance, too, was still on. On results day, March 3, Mr Zeliang said although the BJP has a formal alliance with the NDPP, the doors of the NPF were open for the BJP to come and join. This means the two most important regional parties in Nagaland, NDPP and NPF, have no problem whatsoever in working together with the BJP.

Meghalaya has given a fractured mandate, but there is a clear story there — that the verdict has been anti-Congress. The Congress emerged as the largest single party with 21 seats (down by eight seats from its 2013 tally), but 38 other MLAs who won belong to other parties. Of them, 19 went to the Nationalist People’s Party (NPP), six to the United Democratic Party (UDP) and two to the BJP. One seat went to KHNAM, a local party, while the polls to one seat had been deferred due to the assassination of a candidate in Garo Hills. The Congress and the NPP are evenly poised to stitch up an alliance, but the NPP, which is close to the BJP and is an NDA ally, has a better chance of bringing regional parties on its side.

To what extent is the Congress responsible for the BJP’s rise in the Northeast? To a large extent, really. In Tripura, the Congress was first sidelined by the BJP, which usurped the position of the main Opposition party before the polls. The Congress seemed to have abdicated to the extent that party president Rahul Gandhi came to campaign in Tripura only on the last day of electioneering. In Nagaland, the Congress, for some strange reasons, fielded just 18 candidates. The party did focus in Meghalaya with Mr Gandhi launching his bitterest attack on the BJP, accusing it of trying to “buy the Church”. That worked, but only partially. The clear warning to the Congress is that it needs to start from scratch in the Northeast, which was once its bastion. That means the forces to watch in the region are the BJP and the regional parties.