Capt. Abhishek Pathak
The writer is a serving naval officer who has been posted on board several warships as well as at Naval Headquarters. He is an alumnus of the National Defence Academy. The views expressed here are personal, and are not the official position of the Navy or the Government of India. 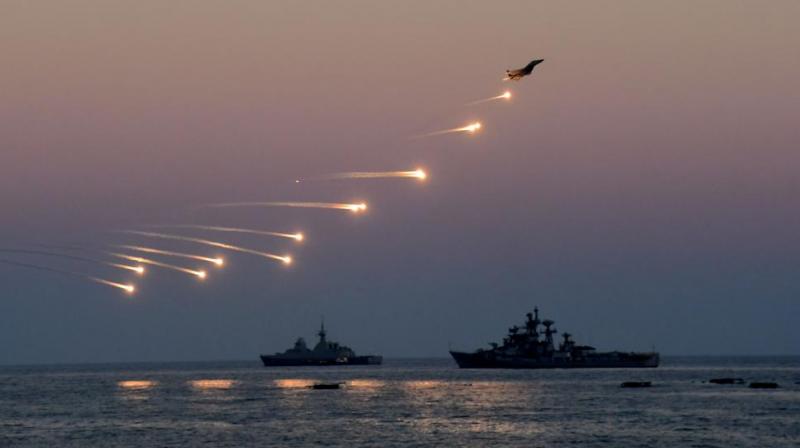 Advanced Training Jets of Indian Navy release flares from the sky during the International City Parade and the Operations display by the Indian Navy at the biennial Multilateral Naval Exercise, MILAN 22 at Ramakrishna Beach in Visakhapatnam. (File photo: DC)

India has displayed a steady rise in the past few decades. The recent Covid-19 pandemic notwithstanding, it is being touted as the fastest growing major economy having recently surpassed the UK to become the fifth largest in the world.

There are three useful metrics to measure a nation’s effectiveness. These are in the “power dimension”, the “spatial dimension” and the “status dimension”.

India’s ascendancy has indeed been remarkable and the joint efforts of all “elements of national power” have contributed towards it. However, with India dependent on the seas for her continued prosperity, there is one organisation that plays a pivotal but silent role. It is the Indian Navy.

The Indian Navy has safeguarded India’s national maritime interests since Independence. This Navy Day is as good a time as any to review its role.

The power dimension looks at combat power. The Indian Navy is considered a significant contributor to peace and stability in the Indian Ocean Region. It’s ensuring that India’s national aim of Security And Growth for All in the Region (SAGAR) is facilitated. Ours is a respected Navy with an impressive inventory of aircraft-carriers, nuclear and conventional submarines and potent destroyers/frigates operating some of the most sophisticated weapons and sensors. These capabilities, coupled with a professional air component comprising a contemporary fighter, maritime patrol and rotary-wing aircraft, provide the Navy the capability of maintaining a credible presence in our maritime areas of interest.

There are only five countries in the world which can build and operate both aircraft-carriers and nuclear submarines, and India is one among them. Through its dedicated satellite network and manned/ unmanned platforms deployed in our areas of maritime interest, the Indian Navy has the ability of maintaining credible maritime domain awareness. What adds punch to our prowess is our professional and motivated manpower. The Navy has proved its mettle on numerous occasions in war, natural disasters, and MOOTW (Military Operations Other Than War) and has always deterred inimical extra-regional powers operating in the Indian Ocean Region (IOR).

The spatial dimension refers to the ability to be present in any place that impacts our national interests. Because of its intrinsic mobility, coupled with a robust op logistics organisation, the Indian Navy has developed the ability to operate and sustain in our areas of national maritime interest proudly displaying the Indian flag. This was clearly demonstrated during the Azadi Ka Amrit Mahotsav celebrations when seven ships were deployed by the Indian Navy across six continents straddling seascapes from Rio de Janeiro in Brazil to San Diego in the United States.

Today the Indian Navy operates not only in the Indian Ocean but also in the Pacific Ocean in consort with likeminded nations and their navies whilst concurrently undertaking maritime security operations in the Atlantic Ocean along the west coast of Africa; the hallmark of a blue water navy. What’s more, the Indian Navy is not only sailing the oceans, but has also made its mark in the adventure world by successful conquest of the “three poles” by its personnel; the North Pole, the South Pole and Mount Everest.

Ninety five per cent of India’s trade is through seas, and 99 per cent of transoceanic data traffic is transmitted via submarine cables, which handle nearly all electronic financial transactions of India with other countries along with communications. Thus, maritime trade and undersea cables are the backbone of India’s economy. The Indian Navy plays a pivotal role in safeguarding these. Further, during the Covid-19 pandemic, the Indian Navy amply proved its “spatial” capabilities by assisting in the repatriation of Indians from various countries whilst concurrently transporting medical equipment and vaccines.

The status dimension refers to formal and informal acknowledgement by others nations of a country’s integral capabilities and self-reliance. India, through the persistent efforts of the Indian Navy in tandem with India’s shipbuilding and other indigenous industries, has been successful in its ability to design and construct aircraft-carriers, destroyers, frigates, nuclear and conventional submarines, and so on. This is duly recognised in the IOR and beyond. From being the largest importer of military equipment, India is now exporting platforms and equipment to other countries and the Indian Navy has played a crucial role in this.

The Indian Navy has over the years enhanced its interactions in the IOR and beyond. This has resulted in numerous maritime partnership exercises and operations in collaboration with not only the navies from IOR countries as a preferred security partner, but also with the navies of the US, UK, Japan, France and Russia, among others. Many countries around the world appreciate the efforts of the Indian Navy-led initiatives like IONS (Indian Ocean Naval Symposium) and MILAN (multilateral naval exercise). The Indian Navy’s training schools and academy are preferred training destinations for many countries in the IOR and beyond. This has further bolstered the Indian Navy’s image as a professional force.

When then US President George Washington said that “without a decisive naval force we can do nothing definitive, and with it, everything honourable and glorious”, he was referring to the role of his Navy in assisting the American dream. As India travels on the path to becoming a more responsible regional player with appropriate contributions globally, the role of the Indian Navy in protecting India’s national maritime interests assumes even more salience, a role that the Indian Navy has undertaken with aplomb in the last 75 years.