Thanks to the media, most of them brave young women, the entire nation was sickened by the pitiless and high-handed behaviour of the police 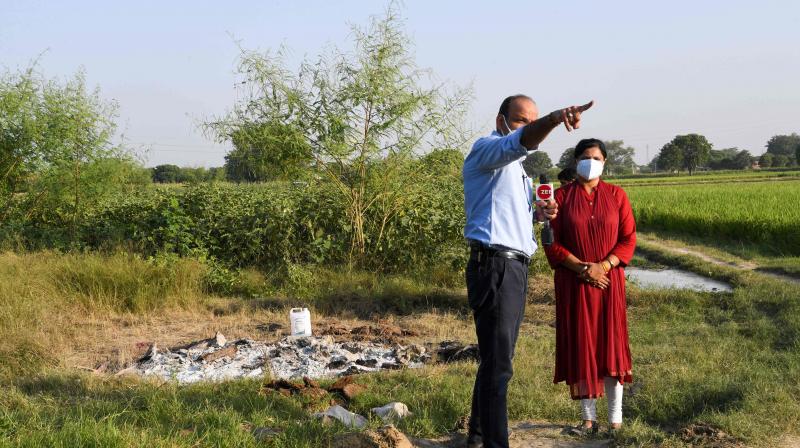 A television journalist reports from the spot where the 19-year-old woman, who was allegedly gang-raped by four men, was cremated on the outskirts of Bool Garhi village in Hathras in Uttar Pradesh. AP Photo

The horrific Hathras rape outrage raises some deeply disturbing questions. First and foremost, is the role of the UP government and police.

Why was the victim’s body taken away forcibly from her home and cremated against her family’s will in the dead of night? The family wanted to perform the last rites in the morning and then cremate her. But her parents and brothers were locked in their house.

Quite apart from the legal propriety of cremating the body when another autopsy was clearly warranted, there is a shocking insensitivity to this episode. The family of the young Dalit girl was in trauma. They had just lost a daughter to one of the most brutal rape incidents seen in recent times.

To take away the dead body against the family’s will, lock up family members, and forcibly carry out the cremation at 2:30 am, shows an unpardonable callousness to basic human emotions.

Why was the UP sarkar in such a tearing hurry? Quite clearly, there must be a reason. If it thought that with her cremation the matter may quickly die a natural death, the outcome was just the opposite.

Thanks to the media, most of them brave young women, the entire nation was sickened by the pitiless, cruel and high-handed behaviour of the police. The visuals of the mother wailing at not being able to even see the face of her dead daughter were appalling.

The UP government seemed to have only one priority, which was to claim that the girl was not gangraped. The state police cited the report of the Forensic Science Lab in Agra, which apparently said that no trace of semen was found.

Surely, the police would know that the absence of semen is no proof that rape did not take place. Moreover, as against the forensic report, there is the dying declaration of the girl herself where she says that she was raped. Is this not proof enough?
In the light of the victim’s confirmation of rape, why was the body not subjected to a fresh examination by a panel that would include a senior gynaecologist? Was this the reason why the body was cremated in such unseemly haste?

There is also the visual of the district magistrate of Hathras obviously trying to intimidate the victim’s family. The media will go away in a day or two, he can be heard telling the family; only the police will remain, so it would be better if you change your statement.

This raises the question of why the UP police want to whitewash this gruesome incident. Who is UP chief minister, Yogi Adityanath, trying to protect?

Is there a caste angle to this dastardly crime, which has something to do with the fact that the four accused who have been arrested are allegedly of the dominant Thakur caste, which is the same caste as the UP CM?

According to the National Crime Records Bureau (NCRB), nearly 10 Dalit women are raped every day, with UP recording the largest number, 14.7 per cent of India’s total. No doubt, UP is the most populous state in the country, but the fact remains that even nationwide — again as per NCRB data — crimes against Dalits have increased by 47 per cent in the period between 2014 and 2018.

The rivalry between the BJP and the Congress has triggered a “competitive rape politics” where a rape in Rajasthan — a Congress ruled state — is being compared to the Hathras incident. This is deeply shameful. Both incidents were heinous and gruesome. But Yogi Adityanath, who dresses in saffron and calls himself a Yogi, must answer for the condemnable manner in which his administration and police acted in Hathras.

Even now the victim’s family is being barricaded by the police, their phones are being illegally tapped, and journalists or politicians of Opposition parties are not being allowed to meet them freely. Why?

The brutal Nirbhaya rape led to national outrage because it happened in the capital of the Republic. But the Nirbhaya of Hathras was not that fortunate.  She was fatally assaulted on September 14, and — as per her own statement — raped, her neck broken and her tongue cut. But national media hardly took any real notice of this shocking incident, until her death on September 29.

On electronic media we were presented frenzied accounts of which actresses allegedly smoked hash, Rhea Chakraborty’s bail application, and Kangana Ranaut’s verbal tantrums. If the media had paused from its breathless chase of Bollywood actresses and focused on this case, perhaps the victim would have got better medical attention, and her life could have been saved.

The minimum that should be done now is to immediately suspend the Hathras DM. The Superintendent of Police (SP) has been suspended. The accused should be tried through a fast-track court in a time bound manner, and if found guilty, hanged like the Nirbhaya perpetrators.

There is a demand that an investigation into the rape and murder should be entrusted to the CBI. But, a “caged parrot” may not be the solution.

What this case needs is a time bound inquiry by a Supreme Court designated judge, which must also fix responsibility for the highly suspect role played by the UP government and the police. It would be good if the UP CM is asked a few questions, not only by his political opponents, but in a judicial process.