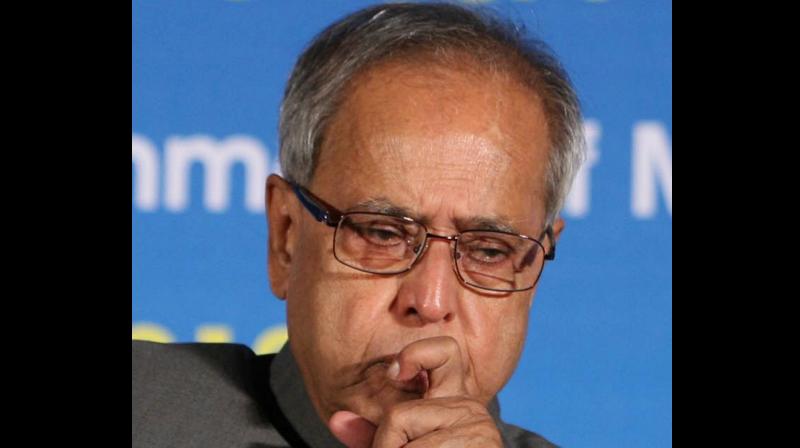 The last active politician who became President before Pranab Mukherjee was Shankar Dayal Sharma in 1992. So it was not an easy going for Pranab. File Photo

The death of former President Pranab Mukherjee on the evening of August 31 after battling medical complications, including Covid-19, has opened the debate, a rightful and meaningful one too, about Pranab Mukherjee the politician and what is to be counted as his legacy, if there is one.

Political colleagues and journalists have tried to assess the man and most of them had zeroed in on the “elephantine memory” and “troubleshooter” aspects.

Some journalists had showed a bit more courage and talked about how he could not become the Prime Minister either in 2004 or in 2009 because he did not seem to inspire Congress president Sonia Gandhi’s confidence, that was sine qua non for getting the job.

It is tempting to rephrase the position of Pranab Dada -- the generic Mukherjee would take away from the man of flesh and blood that he actually was -- as “the man who became President because he could not be Prime Minister”.

But he was not a natural choice for the presidency because he was a politician to reckon with and neither of the two major parties -- the Congress and the BJP -- wanted a seasoned politician to be President.

That is why Atal Behari Vajpayee fell back on non-politician A.P.J. Abdul Kalam in 2002 though his first choice was Indira Gandhi-era bureaucrat P.C. Alexander, and in 2007 Dr Manmohan Singh and Sonia Gandhi chose a little-known politician from Maharashtra, Pratibha Patil.

The last active politician who became President before Pranab Mukherjee was Shankar Dayal Sharma in 1992. So it was not an easy going for Pranab. He had to lobby hard, including through Samajwadi Party supremo Mulayam Singh Yadav with a possible nudge from Reliance’s Anil Ambani in 2012.

Some journalists have thrown in the interesting speculative line about the possibility that never became a reality: that Dr Manmohan Singh should have been sent to Rashtrapati Bhavan and Pranab should have been made the Prime Minister.

And how it could have saved the Congress Party many of the blushes and ignominies. Of course, this was never really in the realm of possibility given the intense rivalries and feuds between the senior leaders in the party.

And there was of course Sonia Gandhi’s trust deficit factor. But Pranab was in the habit of taking whatever came his way and making it his own. During his five-year term, he fulfilled the obligations of the high office and used his political judgment every bit of the way, including his acceptance of a BJP government led by Narendra Modi in 2014.

It would have been easier for a Congressman to accept a BJP leader other than Narendra Modi. But showed no hesitation in seeing Modi as the popularly elected leader and he accepted the 2014 verdict with an open mind.

It is this open mindedness that made him go to address Rashtriya Swayamsevak Sangh workers in Nagpur in 2018, after leaving office, and tell them about India’s pluralist traditions.

Pranab’s political career falls into two clear phases. The first is the Indira Gandhi years, where he was the charismatic leader’s trusted lieutenant, but he was no mere loyalist. He brought an intelligent man’s grasp to policy matters.

The second phase, and the longer one, began with the tragic assassination of Indira Gandhi. He now had to face rivalries in the party, including the perceived one from Rajiv Gandhi himself, and he was metaphorically swimming in shark-infested waters, as it were. Rajiv Gandhi had his own group of talented people, who were a generation younger to him.

He could have thrown in the towel, but he was not the man to do that. He sat out the difficult days. P.V. Narasimha Rao, who became PM once the Congress returned to power after Rajiv’s assassination, knew Pranab’s worth well, but Rao had his own cunning way of handling talent. Pranab being offered the post of deputy chairman of the Planning Commission was no demotion.

It was a job that suited Pranab eminently if you forget the fact that the Planning Commission was an antiquated institution. Rao was not a wholehearted votary of the economic reforms that he had launched.

He did not give up his own Nehruvian faith in a planned economy. And Pranab too was not a reforms enthusiast, in the manner of Manmohan Singh and P. Chidambaram.

It can be said that Pranab really came into his own in the UPA years -- the eight years from 2004 to 2012 where he was the manager of governmental workings even as Sonia Gandhi was managing political affairs for Prime Minister Manmohan Singh.

Pranab showed that he was capable in dealing with the intricacies of administration without handing over the levers of power to the bureaucrats. But he also showed that he was not infallible, and this came out most starkly when he committed the blunder of going to meet yoga guru and agitator Baba Ramdev.

It was a clear sign of loss of nerve by the gritty politician, and it was one of the reasons that the Congress fared so badly at the hustings in 2014.

And in his second stint as finance minister he was faced with the 2008 global financial meltdown, and it seemed his misgivings about a free market economy had been confirmed. The stimulus package he had rolled out was a sign of government patronage of the private sector more than a mere policy measure.

He believed in state regulation of the economy, where the private sector flourished but it did not have a free run. The strings of power remained with the State -- and that is almost the atavistic economic thinking of Pranab. Arun Jaitley had described Pranab’s 2009 Budget as a rollback to the 1980s.

But when he was finance minister, Jaitley simply could not resist the temptation of asserting the rule of the State, more than the rule of law, over the economy. Pranab would have approved of it.