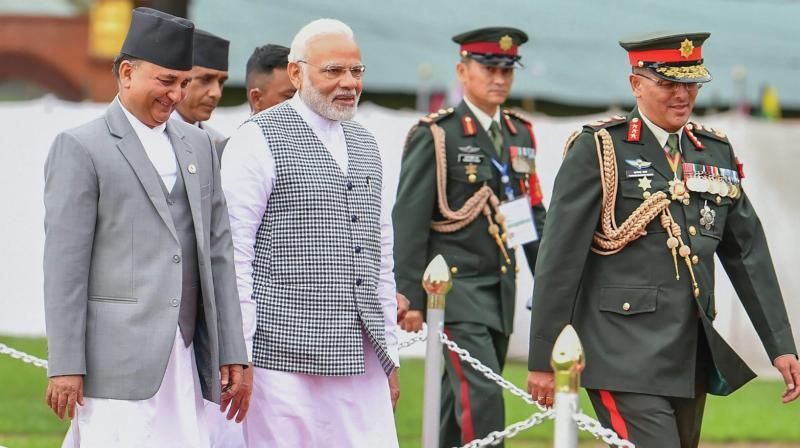 Between a nation performing on global platforms like the United Nations or the G-20 and nurturing bilateral relationships, there is expanding space for regional diplomacy. India has invested heavily in this intermediate sphere, but has so far got mixed results. This came into sharp focus as the fourth summit of the Bay of Bengal Initiative for Multi-Sectoral Technical and Economic Cooperation (Bimstec) ended in Kathmandu last week.

Established in 1997, Bimstec — composed of five South Asian countries (India, Bangladesh, Bhutan, Nepal and Sri Lanka) and two South-east Asian nations (Tha-iland and Myanmar) — aims to leverage sub-regional cooperation for accelerating economic development. Functio-ning informally, it achieved very little until 2015. Since October 2016, however, it gathered momentum as India looked around to assemble its friendly neighbours for an interaction with the leaders of Brics (Brazil, Russia, India, China and South Africa) at their eighth summit in Goa.

In this backdrop, the key takeaway of the latest Bimstec summit was the leaders’ decision to order a major institutional reform to strengthen the grouping. Agreed measures include drafting a charter, creating a new Permanent Working Committee, pledge to provide more financial and human resources to the secretariat, and plan to establish a Bimstec Development Fund. Another highly needed reform is to focus on a handful of sectors rather than frittering away limited resources on 16 areas of cooperation.

Expanding connectivity through roads, railways, air links and shipping has been a priority, but the grouping has not moved beyond the stage of studies and planning. It showed promise for energy cooperation as a new agreement on Grid Interconnection was signed in Kathmandu, but this is not enough. The way forward was best spelt out by Thai Prime Minister Prayut Chan-o-cha in his businesslike address. He urged the organisation to concentrate on connectivity, trade and investment, people-to-people contact, security, and science and technology and “step up to be a key player to support Asia as a driving force of the global economy”.

Even limited progress by Bimstec has raised fears about future prosp-ects of the South Asian Association for Regional Cooperation (Saarc). Nepal’s PM stressed that “Saarc and Bimstec do not substitute but complement each other.” Others in Nepal went on to allege that India, in its zeal for Bimstec, was trying to undercut the Saarc process.

When confronted with a question on the subject, foreign secretary Vijay Gokhale wisely sidestepped it, observing that Bimstec “fits in well” with India’s Neighbourhood First policy, Act East policy and New Delhi’s stress on the development of the Northeast. He also added that India dealt with every multilateral organisation “on its merits”.

Launched in 1985, Saarc groups together eight countries (Pakistan, Afghanistan and the Maldives. in addition to the five South Asian members of Bimstec). It too managed to achieve modest success. It was moving along gingerly when Pakistan’s obstruction to proposals on road connectivity and refusal to respect India’s sensitivities on terrorism led to the indefinite postponement of its 19thsummit (which was due to take place in Islamabad in November 2016). Saarc has been in a slumber mode since then. Its future is dependent on the chances of an India-Pakistan rapprochement, which is uncertain at present.

On South Asia’s western and northern flank, the Shanghai Coope-ration Organisation (SCO) is a Eurasian political, economic and security partnership among China, Russia and four Central Asian countries (Kazakhstan, Kyrgyzstan, Tajikistan and Uzbekistan). It received a South Asian dimension as India and Pakistan joined the SCO as full members in June 2017.

Its 18th summit held in Qingdao was the first gathering of leaders of all its eight members. President Xi Jinping hailed the SCO as “a new model for regional cooperation”, which shared ideas to tackle global challenges amid growing instability and uncertainty. For long, there was a perception that China would allow India’s entry into SCO only when India agreed to China’s admission into Saarc. This proved wrong. Moreover, there were fears that while attending the SCO summit, India might be compelled to reduce its resistance to China’s “Belt and Road Initiative” (BRI). This too didn’t happen as India, braving isolation, reiterated its principled opposition to President Xi’s flawed concept of connectivity.

India is a strategic partner, not a member, of Asean, and this strategic partnership has developed fairly well.  It was on display at the Asean-India commemorative summit in New Delhi recently, and in the participation of all 10 Asean leaders in India’s Republic Day celebrations. The summit marked the 25thanniversary of Asean-India dialogue relations. The two sides agreed to further “strengthen and deepen” the strategic partnership for mutual benefit. Much potential exists for expansion of trade, investment, connectivity, tourism and development cooperation, which is waiting to be tapped optimally.

The Indian Ocean Rim Association (IORA) and Brics are among the bigger regional organisations. India has been playing a prominent and proactive role in them too, not only to promote its national interest, but also to contribute to peace, stability and prosperity of the respective regional spaces.

The range and complexity of issues addressed in the regional organisations, seen above, are truly mind-boggling. Despite their limited numbers, Indian diplomatic personnel – both in the external affairs ministry and diplomatic missions abroad — are able to deal with them, ensuring an appropriate leadership role for India. But they need help! Implementation of agreements and programmes, stemming from the regional fora, needs to be done back home — in various ministries and agencies of the Government of India, state governments and the private sector.

Two suggestions merit consideration. First, the external affairs minister should encourage her Cabinet colleagues to take a greater interest in the subjects tackled in regional institutions and ensure “a whole-of-the-government” appro-ach.

Second, the MEA’s Foreign Service Institute should hold a regular series of workshops for senior officials of various ministries to educate them about the changing dynamics of regional diplomacy. Only then will India be able to reduce the gap between declaration and delivery, and serve as a model for other member-states to perform better on the regional stage.