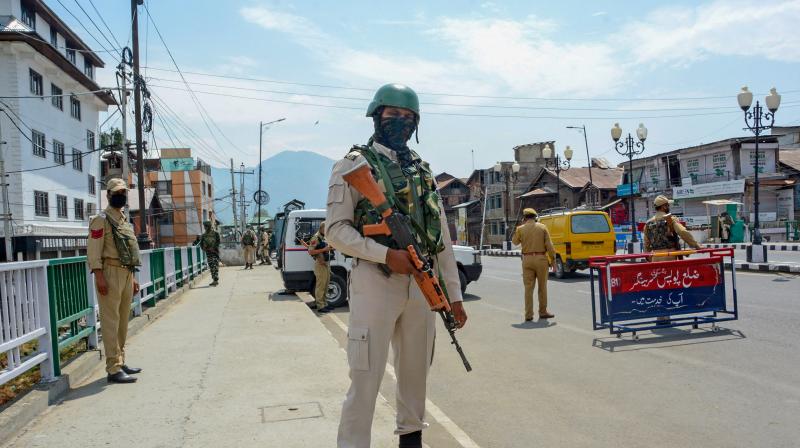 A CRPF jawan stands guard along a street on the first day of the two-day curfew in Srinagar. PTI Photo

High on the hubris of a second electoral victory, the NDA/BJP government carried out a legislative coup d’état on the state of Jammu & Kashmir.

After flooding the state with the armed forces of the Union without any prior consultation with any stakeholders leave alone the Opposition, the government on 5th of August 2019 introduced the Jammu & Kashmir reorganisation bill 2019 and a resolution to repeal Article 370 of the Constitution.

The bill became law despite vociferous opposition in both the Lok Sabha and Rajya Sabha. I had the privilege of leading the Opposition’s charge in the Lok Sabha. A state for the first time in the history of India stood bifurcated into two Union Territories as on 31st of October 2019.

That law for a variety of reasons is patently unconstitutional and is under challenge in the Supreme Court for the past one year. One aspect that perhaps has not been highlighted in the list before the apex court is that the bill flies in the face of the Pre-Legislative Consultation Policy instituted by the previous UPA government on 5th February, 2014. The said policy clearly stated:

“The department/ministry concerned should publish/place in public domain the draft legislation or at least the information that may inter alia include brief justification for such legislation, essential elements of the proposed legislation, its broad financial implications, and an estimated assessment of the impact of such legislation on environment, fundamental rights, lives and livelihoods of the concerned/affected people, etc. Such details may be kept in the public domain for a minimum period of 30 days for being proactively shared with the public in such manner as may be specified by the department/ministry concerned.”

To the best of my knowledge the said policy was never repealed by the first or second NDA/BJP.

One year later it is now time to take stock of what India has gained through these actions. It would be a non-sequitor to say that civil liberties and fundamental freedoms were the first casualties.

They have been mercilessly trampled underfoot by the jackboot of the state.

Home ministry statistics reveal 6,605 people were taken into custody following the reorganisation of the state. 255 of them continue to be in detention in various prisons across the country even one year later.

The central government was compelled to detain three former chief ministers of the state namely Dr Farooq Abdullah, Omar Abdullah and the BJP’s comrade in arms chief minister Mehbooba Mufti. She still continues to be in detention.

The 83-year-old former Union minister Saifuddin Soz endures illegal incarceration even a year later. On Wednesday last, the government told the Supreme Court that Soz was not under any detention.

Tragically, the same day, he was captured on candid camera screaming that what the government had told the Supreme Court was patently incorrect and policemen were not allowing him to move out of his home. This is even more chilling that a person can be detained without any formal legal processes and that too interminably.

What is even more disconcerting is the purported letter written by the Executive Committee of the Jammu & Kashmir Bar Association to the Chief Justice of India on June 25, 2020.

Even a law student understands that the jurisprudence of habeas corpus places it on a pedestal when compared to other writs since it concerns the life and liberty of an individual.

Coupled with this has been the extended periods of curfew and the non-resumption of 4G internet services in Kashmir considering that the whole world has been compelled to go virtual in the wake of the China Virus alias Covid-19.

In other words there was never and still isn’t even minimalist support for the abrogation of Article 370 in Kashmir. Even in Jammu the reality has began to sink in that the influx of outsiders would not be in Kashmir that continues to be volatile but in Jammu.

It has remained largely peaceful over the three decade long militancy. The new domicile rules have further reinforced the perception that the NDA/BJP government wants to transform the demographic complexion of J&K.

There are some other implications that are even more portentous.

Articles 230 and 231 of the Indian Constitution empower Parliament to extend the jurisdiction of high courts to Union Territories and establishment of a common high court for two or more states, respectively, while Article 230(1) uses the phraseology “two or more high courts and a Union Territory”.

China reacted sharply to the reorganisation of Jammu & Kashmir and the home minister’s bellicose utterances on Aksai Chin. Their foreign office spokesperson stated: “China deplores and firmly opposes that (move).
This is unlawful and void and this is not effective in any way and will not change the fact that the area is under Chinese actual control.”

Were the government’s actions the trigger for the Chinese theatre level aggressions that India is currently dealing with is a question that the NDA/BJP would need to answer itself.

Finally, what are the implications of this internal reorganisation qua the Shimla Pact of 1972?

The Agreement states, “Pending the final settlement of any of the problems between the two countries, neither side shall unilaterally alter the situation.”

Would the reorganisation carried out last year render the agreement dud or does it still remain valid given that Pakistan has reorganised the internal dynamics of PoK and the Northern Territories ad-nauseam in the past 70 odd years? The jury remains out on that.

The author is a lawyer, Member of Parliament and former Union information and broadcasting minister. The views expressed are personal. Twitter handle
@manishtewari.