It has become clear by now that Modi is uncomfortable with the nitty-gritty, and with details 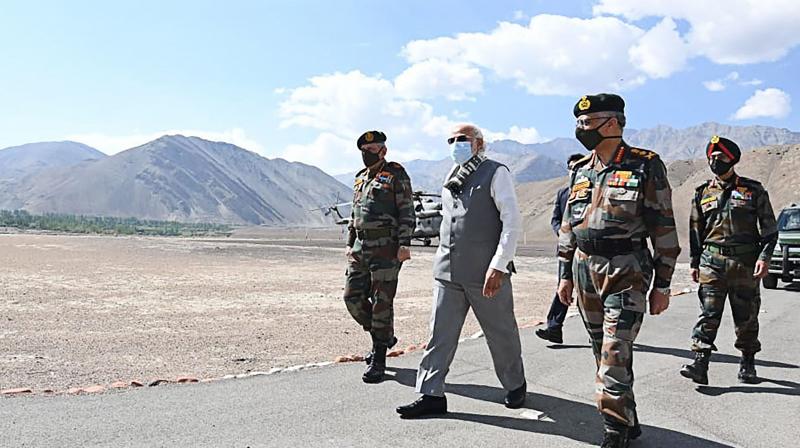 Prime Minister Narendra Modi during his visit to a forward location in Nimu in Ladakh. PTI Photo

Prime Minister Narendra Modi’s sixth televised address to the nation on June 30 -- the other five were on March 19 and 24, April 3 and 14, and May 12 -- was conspicuously silent on the three most burning issues facing the country: Covid-19, the economic crisis triggered by Covid-19 and the stand-off with China in eastern Ladakh’s Galwan Valley.

Instead, he spoke about how there will be stress in people’s spending between July and November because of a series of festivals like Janmashtami, Ganesh Chaturthi, Onam, Dussehra and others.

Also, the Prime Minister announced that the free rations for the poor, that was first announced in the last week of March in the wake of the initial Covid-19 lockdown and the consequent economic paralysis, will be extended till the end of November.

He mentioned in passing the need for people to observe the mandatory wearing of masks and social distancing, and warned in the tone of a pater familias that people had been flouting the Covid-19 norms during Unlock-1, which began on June 1. He didn’t voice concern or explain the exponential rise in the number of Covid-19 cases in May and June, and how it seemed that the increase in the pandemic numbers would continue for a while.

He just said the recovery numbers were good and better than the rest of the world. He did not think it important to speak about the human trials of the coronavirus vaccine that the Indian Council of Medical Research (IC) and its affiliate, Pune’s National Institute of Virology (NIV), was conducting in partnership with the Hyderabad-based vaccine manufacturer, Bharat Biotech Ltd.

In contrast to his March 19 and 24 speeches, where he talked about meeting the challenges posed by Covid-19, and how the nation of 130 crore can defeat the virus, by the time he spoke for the fifth time on May 12, it seemed that he realised the coronavirus cannot be defeated and that we must learn to live with it.

He shifted his rhetoric to his new coinage of “Atma Nirbhar Bharat” Abhiyan as a way of grappling with the economic challenges posed by Covid-19. It seemed that the Prime Minister was afraid of looking closely at the situation arising from Covid-19 and the economic disruption caused by it.

He was looking to spin a new political yarn, and the “Atma Nirbhar Bharat” rhetoric served that purpose.

It has become clear by now that  Modi is uncomfortable with the nitty-gritty, and with details. He is happy to forge new slogans and indulge in pep talk and asks his Cabinet colleagues and bureaucrats to work out the details.

It would seem that it is a fair division of labour, and that as leader of the government and the country, he would throw up the big ideas and focus on the big picture, while the others would do the inevitable spadework.

But, of late, the Prime Minister has got into the habit of not referring to the big issues at all -- the proverbial elephants in the room.

In his June 30 speech he did not talk about the three big issues: Covid-19, the economy and the Chinese imbroglio, in which 20 Indian soldiers were killed in the violent standoff of June 15-16. More than on the other two questions, the Prime Minister has scrupulously been avoiding referring to the China problem as though that if he were not to talk about it, it would not exist.

The Prime Minister’s aides are sure to argue that it is  Modi’s prerogative to choose the issues he would talk about, and that if he does not mention something, that shouldn’t be taken to mean that he is deliberating on them.

It can be conceded straightaway that sensitive aspects pertaining to security cannot be discussed in public, and that confidentiality is the essence.

What the people want to know is that the Prime Minister is dealing with the big issues even though it would not be possible for him to share the details.

Modi has created an image of himself as a man who speaks his mind. And when he does not seem to be doing so, it becomes a matter of concern to the people.

The inference is inescapable that the Prime Minister is finding the issues to be too prickly, and he does not know how to speak about them because he has got into the habit of talking about successes and achievements, which he knows how to capitalise for electoral gain.
But he finds himself in a tight spot when there are setbacks. A leader’s test is when he can speak out about problems without losing his cool.

His latest address to the nation gave the impression that he was speaking in terms of a bucolic India, which is governed by the rhythm of seasons, when there is not much work during the rains and it resumes at harvest time in November-December.

He does not appear to see any prospect of economic upturn and employment regeneration between now and the end of November. Hence the promise of free rations until then. If this is indeed the case, then the government as well as the people are in for hard times.

Modi and his colleagues in the government and in the ruling party are not unduly perturbed as there is no credible political alternative to them in the country.

Their complacency and incompetence, and it is not hidden any more, might however prove fatal in the long term, but they are ruling the roost unchallenged right now. The state of the Opposition parties, and particularly that of the Congress, is pathetic, to say the least.

The people then are left to fend for themselves. They must get the economy going as much as they can on their own. Thanks to the impressive foodgrain output of the last season, and the promise of a good monsoon this season, it should be of some help but it alone cannot revive the economy.

It is the big investors and big businesses who will need to show some pluck to get out of the economic shallows. Meanwhile, Modi can continue to indulge in his almost solipsistic soliloquies as the people struggle to get their lives back on track.