In the armed forces, no one looks at your faith, caste or ethnicity 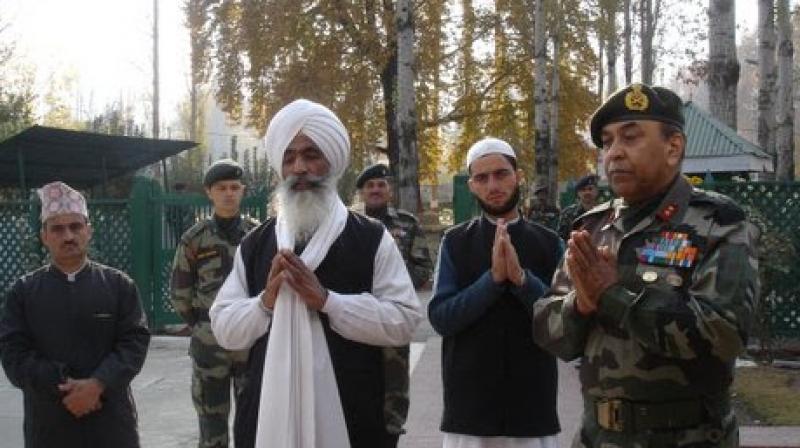 Unity never hurts a nation; that is what your Army is pursuing and truly showing the way. (Representational Image/ By Arrangement)

Warriors of the Indian armed forces, past or present, tend to take its unique value system for granted. Little is it realised how ignorant and impervious the majority of the public is, which knows very little about all this.  This value system is imbibed by one and all among those who wear the uniform. Different aspects contribute to the value system; there is basic discipline, unquestioning attitude towards orders and the willingness to defend the honour of the nation and the cap badge that warriors adorn on their embellishments. The spirit of pluralism that prevails at every level of the warrior community is one of the most valuable of these aspects. In the armed forces, no one looks at your faith, caste or ethnicity. It’s immaterial whether you are a part of a mixed or a single class entity, or from which faith or region you hail. The only thing important is that you are serving the regiment you belong to and the nation. This is such an important quality of our armed forces that it’s a pity that a large segment of the Indian public is unaware of something that should make them all proud. The principle of unity in diversity, one of the most beautiful of India’s characteristics, is best epitomised by its warriors.

For officers, there is a very simple saying — “the faith of the officer is the faith that his jawans follow”. This is something quite alien to all those outside the forces. Many do not realise that I, as a Muslim, will follow every ritual of my troops, who are all Hindu. My troops have equal respect for my faith, and will go to great lengths to ensure that every sensitivity of mine is respected, just like I respect theirs.

It is sometimes amazing how much the troops know about faiths other than their own, without any formal instruction. In a profession where life and death are based upon the trust and faith between the leader and the led, there is little scope for choice of spirituality. All along the Line of Control troops following different faiths ensure they maintain and respect the hundreds of Pir Babas related to the Sufi faith. As an unwritten rule, no warrior consumes non-vegetarian fare or liquor on Thursdays, which has been designated as Pir Baba day by no order or edict. It does not need a Sufi cleric to say the prayers if you happen to visit a Sufi shrine in the precincts of an Army post or even in a garrison. Every soldier is a cleric and the unit religious teacher (RT) will happily lead the prayers and distribute the “prasad” (it’s actually called “prasad”, and why shouldn’t it?). I never tire of relating that my parents, in their time, and my wife and I in ours, inevitably led the “pooja” of my parental unit, comprising the most devout Hindus from Uttarakhand, men of the Garhwal Rifles. I made the pilgrimage to Badrinath many times, but also necessarily out of compulsion as the head of the regiment in senior ranks. That is because Badri Vishal, the personification of Lord Vishnu, happens to be our presiding deity. My men and I went into every operation with the name of Badri Vishal on our lips and, when necessary, screaming our war cry — “Bol Badri Vishal Ki Jai” (victory to the followers of Lord Vishnu). Could I be less of a Muslim by being also a follower of Lord Vishnu? That is nothing unique because officers belonging to faiths other than Muslim who command Muslim sub-units in the Grenadiers, Rajputana Rifles or the Rajput Regiment always ensure they keep all “rozas” through the period of Ramzan, and even say their prayers with the troops five times a day.

Young officers of all regiments visit their recruiting areas to learn of the culture of the region from where their men hail, thus imbibing details from every practical angle.

None of this appears to be known to ordinary citizens in India because the armed forces remain isolated in their own unique culture and never wish to be affected by much of the negativity that is prevailing outside. Little wonder then that when the customary “iftar” function is held in Jammu and Kashmir and the Army plays host to some local people, there are objections posted all over by the owner of a right-wing extremist television channel. Ordinarily, the Army would ignore it as just another shenanigan. This time, its Jammu-based PRO, unlettered in the ways of the social media, decided to take down the photographs which he had rightly posted to showcase the Army’s unique inclusive culture and respect for local customs. Taking down a social media post is akin to endorsing the viewpoint of those who had objected to its contents. That is where the controversy started. Many vouched for the Army’s culture but equally many questioned the need for the Army to hold such events. Thankfully, we have an Army which does not wilt. In less than 48 hours, it posted a photograph of the Chinar Corps commander (an appointment which I once held very proudly) saying the traditional Id prayers at the JAK LI Regimental Centre’s Mandir-Masjid-Gurdwara (commonly called MMG) in the company of officers of different faiths. That is a unique institution where a Sikh granthi may lead the namaz or the prarthna, with total approval of all. The photograph went viral and helped expose the Army’s truly inclusive culture. To the question why an iftar was organised for the locals, there is a simple answer. It’s not for nothing that the Army follows the principles of Military Civic Action and pursues Operation Sadbhavna (goodwill) in all border areas affected by irregular threats. Let everyone understand that the centre of gravity of CI/CT campaigns is always the people of that geographic sub-region; anything and everything done to win their hearts and minds contributes to the Army’s overall intent of neutralising enemy propaganda and keeping the people strongly on our side. Success in this does not come easy, but then success in anything the Army pursues does not come easy. It does, however, expect the people of the nation to support those efforts.

Its own unique inclusive culture is a natural bond with local people. However, the people in the rest of the nation can surely understand this better and not work against the intent of what their Army is pursuing with such passion and heart. Unity never hurts a nation; that is what your Army is pursuing and truly showing the way.