Opinion   Columnists  04 Mar 2022  ‘Racism warning’ for Shakespeare, Hemingway: Is it tip of the iceberg?
Opinion, Columnists

‘Racism warning’ for Shakespeare, Hemingway: Is it tip of the iceberg?

In my critical understanding there is woke, and there is what has to be labelled 'Jwoke'! 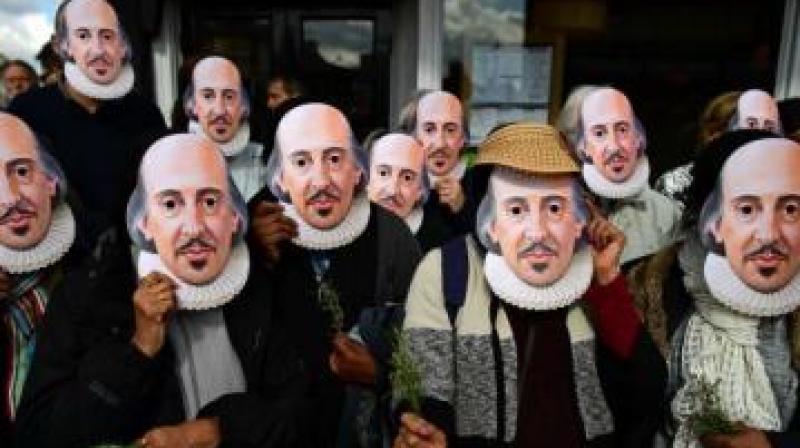 The Royal Shakespeare Company has appointed a sort of czar to point out to schoolchildren the racism, sexism, ageism, homophobia, misogyny, anti-Semitism, sizeism in his works. (Representational Image/AFP)

“Buddha has a curly hair style
Ganesh has an elephant’s head
Krishna the flautist does beguile
And Yama the god of the dead
Has a frightening face, a terrible sight
With an outstretched tongue, blood red
Though we -- One-God-wallas -- say God is light
And worship the abstract instead.”
From Histry ki Isstry, by Bachchoo

“Sweet are the uses of absurdity,
Which, like the toad, ugly and self-righteous,
Wears yet a precious jewel in his head;
And these critiques, exempt from common sense,
Finds unexplored writers, prizes to give them,
‘isms’ in books and offence in everything”!

I must confess that the above is a quote from a dead, white, male writer from a country engaged in colonial adventures. He is best known for writing tragedies, histories confined to the annals of white, male kings, comedies without jokes and sonnets to a boyfriend. Before his works are banned for sexism, racism, etc, I urge you to get hold of his complete works and keep it hidden from the thought police. His name is, or was, William Shakespeare. (At the time of writing, Amazon still sells copies!)

I admit that I’ve distorted his quote, substituting “absurdity” for the original “adversity”. And whereas his toad was venomous, mine is self-righteous. And so, with other phrases with which I have taken this warranted liberty.

Which warrant was occasioned by the fact that the Royal Shakespeare Company has appointed a sort of czar to point out to schoolchildren the racism, sexism, ageism, homophobia, misogyny, anti-Semitism, sizeism in Willy’s works.

Now I really don’t want to do this worst thing and deny that these attitudes may exist in the plays. Ms O’Hanlon’s department has formulated a curriculum for schools which intends to expose these aspects of Willy’s works. As the modified quote at the top of this column says, there is a certain absurdity in this approach and yet I concede it can boast a certain necessity and critical virtue and acumen. The danger is that this emphasis will turn the tried and applauded accuracy of the portrayals and drama in Shakespeare into a litany of victimisation.

This RSC caper, as the passengers on the Titanic would say, is only the tip of the iceberg.

The Scottish University of the Highlands and Islands, which constitutes 13 research institutions and colleges, has issued a “content warning” for Ernest Hemingway’s classic novel The Old Man and The Sea. The warning to students, which is expected to put them off reading the books, says it contains violent allusions to fishing. It’s not the only book the university issues caveats about.

It has targeted several classics. The list includes Homer’s The Iliad, written in the eighth century BC, and Beowulf, an English poem from 1025 AD, with warnings that they contain “scenes of violent close combat”. Meanwhile, Mary Shelley’s Frankenstein is said to contain “violent murder and cruelty” and Shakespeare’s classics Hamlet and Romeo and Juliet allegedly contain scenes of “stabbing, poison, and suicide”. A university spokesman defended the warning notes, saying that they “enable students to make informed choices”.

Far be it from me to be listed, or thought of, as an anti-woke warrior, but in my critical understanding there is woke, and there is what has to be labelled “Jwoke”!

Why would I, who have spent my adult life in the UK characterised as a British-Indian writer, some of whose work is about the new communities of Britain, not see the virtue in bringing black, Asian and other minority ethnic writers to the reading public and onto the literary prize lists?

Though I don’t believe in the stars, I thank my lucky ones that I was one day approached, in the staff room of the school where I taught in the 1970s, by a young man in a grey suit.

At the door of the staff room, he asked: “Are you Farrukh Dhondy?” I said “does he owe you money”; and when he said “no”, I asked if he was from the police.

He said his name was Martin Pick, and he was from Macmillan’s publishing house. He contracted me that very day to write a book of short stories set in the Asian and black communities of Britain about which I had written pieces in agitational newssheets and pamphlets that he had read.

Now, decades later, there are departments of literature at universities who promote the writings of women and the “minorities”. Some of them indulge the idiotic idea that dead white male writers should be shunned or banned. I suppose they mean Shakespeare, Charles Dickens, Karl Marx, Freud, Conrad, Proust, George Eliot (Idiot! That’s a woman called Mary Ann Evans! -- Ed. Oh dear, sorry yaar, thought George was a man’s name -- except of course in a book I once read where it was short for Georgina, by a writer called Enid something… -- fd)!

I, for one, would hate to be in a list of women, black and ethnic writers that excluded white males. Though it’s unlikely, I’d much rather be mixed in even at the very bottom, with Shakespeare, Dickens, Faulkner, Eliot, Naipaul…