Farrukh Dhondy | No. 10 parties: BoJo is trying desperately to fend off GoJo 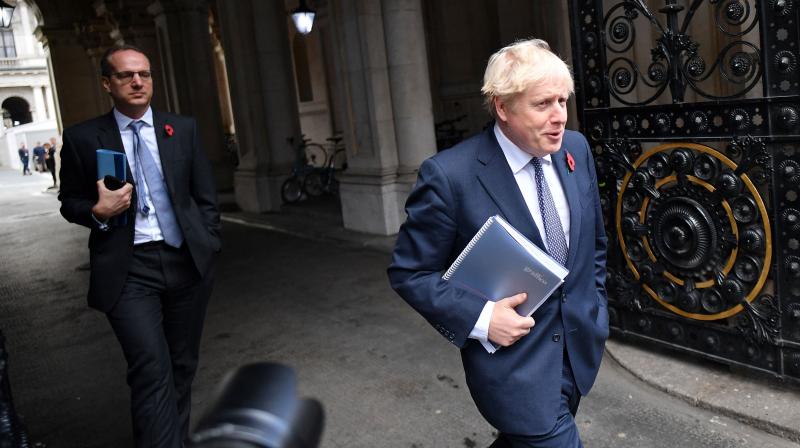 “This poor young girl from Calcutta
Suffered from an embarrassing stutter
At breakfast she said
I don’t really eat bread
But will have some b…b…b…butter!”
— From Tamboo Mey Ghabrahat, by Bachchoo

For Britain’s Prime Minister BoJo, it’s soon if not now — as we used to say in the Wild West — Curtain Call at Cactus Creek! Or was that the name of a Western we watched in our teens?

BoJo survives but the nails are being steadily banged into the coffin. This week civil servant Sue Gray, who was entrusted with the task of investigating what has become internationally known as “Partygate”, presented her report. A summary of it was released, devoid of names and detail.

I have never read the best-selling book Fifty Shades of Grey, but when my daughter, after reading a few pages, threw it into the wastepaper basket, I rescued its cover and stuck it on the book I was currently reading on the Underground. People would look at me and perhaps wonder why this dignified looking person was regaling himself with filth. I pulled this off, gentle reader, to emphasise to the world the ironies and paradoxes of reality. Encased in the cover of Fifty Shades was Kant’s Critique of Pure Reason. Er… Okay, it was a Philip Roth novel.

Ms Gray’s report had no shades of grey. It was there in black and white. “A failure of leadership… the events should have been prevented… the atmosphere within 10 Downing Street… inordinate amount of alcohol… leadership allowed, encouraged and perhaps even organised 16 parties in complete contempt of the lockdown that BoJo’s government had imposed on the country”. It was a clear indictment of the broken rules.

Twelve of the parties held in 10 Downing Street’s offices, gardens, in the Cabinet Room and in BoJo’s flat above 11 Downing Street are now the subject of a criminal investigation by Scotland Yard. The investigating officer cautioned Ms Gray against publishing details of these particular cases as that could prejudice the police’s gathering of evidence.

On Monday, and again on Wednesday, Parliament convened to question BoJo on the summary of the report, such as it was. Member after member asked him whether he was present at one or other of these do’s. His repeated curt reply was: “Wait for the Scotland Yard investigation to conclude and publish their findings.” His questioners pointed out that it was absurd. Does he not know where he was or is?

His constant recourse to asking judgment to be suspended till the police report comes out is seen by many, and probably by a majority in the country, as a ploy engineered by BoJo or his associates. The very late decision by Scotland Yard to investigate the parties is, according to the conspiracy theory, a payback by the Metropolitan Police commissioner for BoJo keeping her in her job for a further two-year term when she was due to retire last year.

Senior members of BoJo’s own party turned vociferously against him. Former PM Theresa May, whom BoJo replaced, provocatively asked if he hadn’t known the rules of the lockdown which he himself formulated.

Apart from demanding that all judgment as to his future be deferred till such time as the police report is complete, which may take up to a year, Boris and his allies launched three strategic thrusts to try and regain lost ground.

Boris, in his answers and statements in Parliament, launched a personal attack on Sir Keir Starmer, the Labour Party’s Leader of the Opposition. He said: “He’s not a leader, he’s a lawyer”. The statement was a hostage to fortune. One MP replied that he would rather be led by a lawyer than by a liar.

In an attempt to demonstrate that Starmer was not, despite his rising poll ratings overtaking those of his own, a supporter of British public opinion, he pointed out, quite out of context, that the Leader of the Opposition had voted several times against Brexit. Starmer couldn’t deny that.

BoJo went further. He claimed from the floor of the House that Starmer, in his previous role as the head of the Crown Prosecution Service, had obstructed the prosecution of the notorious paedophile Jimmy Saville.

His own MPs pointed out that this was a heinous lie copied from an openly fascist website. Though asked to do so, BoJo refused to apologise or withdraw the slur.

The second prong of the recovery strategy is to insist that though he is sorry for what went on in No 10, these parties and gatherings and other breaches of the law -- if they did indeed take place, “we can’t really tell till the police report comes out” — are trivial compared to the challenge that Britain and Nato faces from Russia on the borders of Ukraine. BoJo would have his Falklands moment if not his Churchillian one.

The third strategy is to publish several initiatives that BoJo’s government will undertake — revising the impositions that EU membership imposed, boasting about the benefits of Brexit, whether they exist or not; launching a levelling up programme to benefit mainly the northern, poorer parts of the country.

But none of it might work. There’s still the possibility that 54 Tory MPs will send in letters of no confidence in this leader, which will then trigger an election. Even if he wins, a divided party will mean paralysis and very soon GoJo.