Shobhaa De | Dalit lives: No more than a heap of ashes

To call UP anything else but a barbaric, no man’s land, would be insulting women across the country 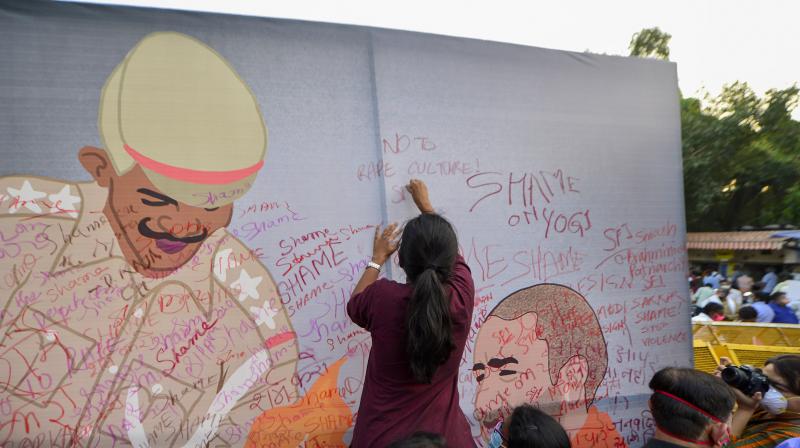 People from various organizations stage a protest against the alleged gang-rape of a 19-year-old Dalit woman in Uttar Pradesh’s Hathras, at Jantar Mantar in New Delhi. PTI Photo

Ashes to ashes, dust to dust… nothing changes in our brutal and brutalized India. For centuries, we have lived with the tyranny of caste and oppression.  Today, India’s dark and ghastly secret lies exposed in an even more graphic manner with the alleged rape, mutilation and death of a 19-year-old dalit girl in Hathras, Uttar Pradesh.

To call UP anything else but a barbaric, no man’s land, would be insulting women across the country.
And this is the state ruled by a person who calls himself a yogi! What sort of a yogi looks the other way, encouraging his administration to do the same, while a defenceless pulped female victim is treated worse than a discarded rag and unceremoniously cremated by cops? Even stray puppies in distress receive more attention.

The accounts of what the poor girl endured at the hands of those four beasts are too horrific to recount. The visuals, too sadistic.

But the pathos of her hasty cremation will -- or should -- haunt generations of Indians. She was denied basic human dignity in death. Her mother’s heart-rending pleas to say her final goodbye to a beloved daughter, by putting haldi on her dead body, fell on deaf ears.

A poor, disenfranchised dalit girl’s corpse was dragged to a secluded spot and hastily cremated, surrounded by the very police force that not just failed to protect her, but thought nothing of the rape, and strenuously tried hard to ignore the national outcry of horrified citizens when they raised their voices in protest. “We are punished for being born dalits.

Our only sin is our birth as Dalits,” a distraught relative of the victim was quoted as saying, as the administration wasted not a minute in sealing the Hathras border after this heinous act. An official asked: “How can we arrest anybody? Has rape even been proved?”

This is 2020. And we refuse to deal with our country’s biggest scourge --bigger than the Covid-19 crisis by far -- the scourge of caste.

So-called educated, upper caste men from the region have traditionally strutted around terrorising those who they deem “inferior”. Dalit men who go to the market to buy essentials are instructed by shopkeepers to stand at a distance, while their purchases are thrown to them.

Even an accidental touch is considered worse than coming in direct contact with a Covid-19 positive patient. The whole idea of “purity” is so deeply embedded across India (not just in UP) that it should embarrass us deeply and lead to a  questioning and outlawing of this nasty, discriminatory practice that has gone unchecked for centuries.

Caste, and let’s add colour. Both exert a diabolical control over the lives of India’s most vulnerable segment -- women. Think about it -- even Suhana Khan, daughter of superstar Shah Rukh Khan, has not been spared. Her post this week talked about being viciously targeted by troll armies and called a “Kaali Billi”.

In this context, I came across a news report on a short film that’s attracting attention The Discreet Charm of the Savarnas, with a provocative premise: Three people with a deadline to  complete a  project go in search of a character to be cast as a dalit! Raising the key question: what does a dalit look like? One of those shortlisted for the role is outraged! He is a brahmin!

And it was “below his dignity” to play a dalit. Writer-director Rajesh Rajamani says his main intention was to put the “ruling classes” under public glare, for “they are the ones who are perpetuating the caste system”.

Many powerful movies have been made on this disturbing, volatile subject over the years. Many books have been written. And yet, when something as stomach-churning as the Hathras death takes place, India finds itself divided!

Uttar Pradesh, that lawless, unwieldy and chaotic state, is after all, a microcosm of India. It’s chief minister and his cronies have the support of the Prime Minister and his core team.

Had there not been such a widespread condemnation, it would have been just another mutilation and death of an anonymous, inconsequential dalit girl who was of no further use to anybody.

So the sordid saga carries on. Protests and arrests. Token gestures and compensation. But the deep-rooted contempt for and revulsion towards India’s most marginalised people does not shift an inch.

From discriminating against dalit kids in primary schools, to denying dalits a chance at playing on a level playing field later in life, our so-called “upper” castes continue to perpetuate the prejudices that have kept millions of fellow citizens from daring to dream of a better tomorrow.

The callous administration in Uttar Pradesh is counting on everybody forgetting what happened in Hathras, when a helpless woman was left to die, and then stealthily cremated in the dead of the night, while her mother wailed and beat her breasts to express unimaginable sorrow.

The unfeeling cops formed a cordon around the pyre as if to protect -- protect who? Themselves? From? Surely not the girl’s impoverished father who is now being pressured by the district magistrate to “rethink” his statement, since the media will lose interest in a few days?

The veiled threat is hard to ignore. Meanwhile, Prashant Kumar, UP’s additional DGP (law and order), denies that any rape took place. So, Prashantji… did the 19-year-old’s spinal cord break spontaneously? It is more than obvious that Yogi will “meditate” and then “mediate” swiftly, to create a fresh narrative and hastily bury this shameful chapter.
Rahul and Priyanka Gandhi were prevented from meeting the victim’s family – was anybody surprised?
Murderous, casteist mobs can cut off a woman’s tongue, break her spinal cord, strangulate her and burn the remains like so much discarded rubbish or raddi.

The Allahabad high court has taken suo moto cognisance of the fatal assault on a dalit woman in Hathras. There are millions of other equally vulnerable dalit men and women out there. India will run out of prisons for those guilty of butchering co-citizens who do enjoy equal rights under the Constitution.

Not that it matters. Which is why nobody bothers to follow up and take action against the culprits. These atrocities have been institutionalised and eerily accepted by the vast majority. To use Mahatma Gandhi’s last and final sigh: “Hey, Ram!”