For Saudi women, a long way still to go

In foreign policy, Saudi Arabia finds its proxies near total defeat and its Syrian war strategy in shambles. 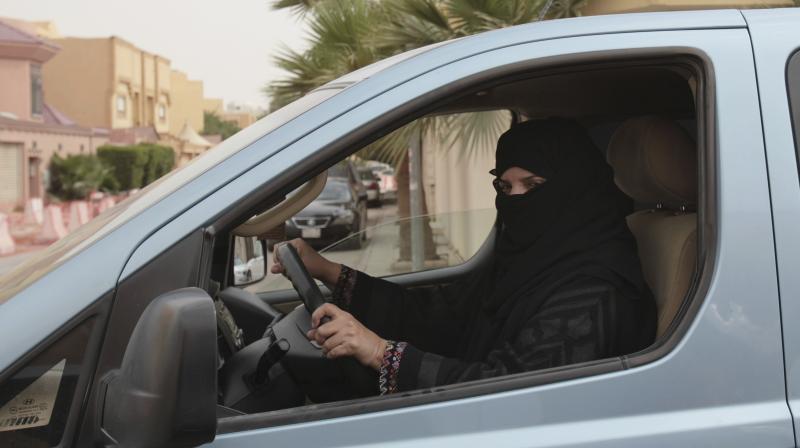 A woman drives a car in Riyadh, Saudi Arabia, as part of a campaign to defy Saudi Arabia's ban on women driving. (Photo: AP/File)

Saudi Arabia’s royal decree allowing women to drive automobiles is a weeny symbolic change in an overwhelmingly gender-unequal country. It is incapable of opening a wedge in the absolute patriarchal system of laws and enforcement which relegates women to the status of less-than-full human beings.

The journey for the emancipation of almost-enslaved Saudi women is long and tortuous, and will require fundamental political and religious transformation rather than token administrative gestures. This is because the system aptly described as “gender apartheid” by Prof.

Ann Elizabeth Mayer of the University of Pennsylvania is interwoven into the fabric of governance and legitimacy underpinning the ultraconservative rule of the Saudi monarchy.

Treating women’s liberation as a standalone issue, separate from the broader question of Saudi Arabia’s democratisation, is a reductionist folly. When a state authority driven by Wahhabi Islamic ideology is in power, there simply can’t be genuine autonomy for women to make their own choices.

Saudi social anthropologist Madawi al-Rasheed has analysed how women are subordinated and excluded from the public domain to maintain the world’s “most masculine state”. She shows how the Saudi state and its allied Wahhabi clerics consciously use suppression of women to forge a unified nationalistic narrative over heterogeneous pre-Islamic tribal traditions and set Saudi Arabia apart as an exceptionally pure Islamic country.

Further, she argues that “controlling women’s religiosity, appearance, movement, education, work, economic activity, property and marriage are the most cherished devotions of Saudi religious nationalism, its priesthood and the state”. The unparalleled surveillance and punishment of women in public and private spheres through the notorious moral police (Mutaween) is a central mechanism for the Saudi monarchy and its Wahhabi theologians to maintain order and their own supremacy.

Feminists hold that all nation-states, not just hardline Islamic ones, are “gendered” to some extent as they are built upon unjust distribution of rights and duties that disadvantage women and legalise their inferiority. Saudi Arabia is the epitome of this process — its guardianship laws and prohibitions have so many “not allowed” categories for women compared to men that finally securing the right to drive cars is akin to the proverbial drop in the ocean of misogyny and intolerance.

The list of forbidden activities for the fairer sex is too voluminous and entrenched in the Saudi body politic to be wiped out clean. Abolishing the whole fulcrum of the guardianship legal frame and the Sharia justifications behind it would amount to implosion of the Wahhabi monarchy itself.

So, given the overall rigidity of Saudi gender apartheid, the most the royal family is willing to do at critical junctures are paltry incremental sops like lifting the ban on women driving. Whenever the Saudi state is under duress and scared of rising dissent, it looks for safety valves by easing a little bit of pressure on society while keeping the overarching principles untouched.

In September 2011, the late King Abdullah granted Saudi women the right to vote and contest as candidates in local body elections from 2015 onward. This may have been motivated by fear of the Arab Spring fervour spreading into the kingdom and triggering a revolution.

By extending “political rights” to over half the population, the idea is to contain the spirit of democratisation and other secular tendencies. But in the Saudi context of an entrenched hereditary monarchy, voting and elections have negligible impact and letting women cast ballots is another cosmetic measure.

Statistics tell the true story of Saudi women’s caged situation. According to the World Bank, women constitute just 20 per cent of the Saudi labour force, comparing poorly even with GCC member-states like Bahrain (39%), Oman (30%), UAE (42%), Qatar (53%) and Kuwait (48%). Preventing women from driving was one of several factors marring women from working and increasing their income levels. Overturning of the ban might minimally improve women’s presence in the Saudi workforce and boost the “Vision 2030” economic diversification blueprint of the new crown prince Mohammad bin Salman. But the ban on women working in many sectors of the economy where there could be sexual intermixing and restrictions on female mobility without the permission of male guardians can obviate the practical benefits of women getting driver’s licences.

Politically, the recent sensational palace coup which upstaged the previous crown prince and elevated Mohammad bin Salman to the pinnacle offers some context to the surprising edict easing women’s driving conditions. The young heir to the throne hopes to consolidate his own power and displace rivals in the transitional phase. Positioning himself as a socio-economic reformer can be a cynical ploy to weaken factions in the clerical establishment opposed to him.

In foreign policy, Saudi Arabia finds its proxies near total defeat and its Syrian war strategy in shambles. The kingdom has been lobbying fervently in the United Nations to block an independent inquiry into war crimes its military has committed. The image problem that constantly dogs Saudi Arabia for its foreign policy misadventures and export of sectarian Sunni fundamentalism is being sought to be softened through rescinding the driving ban on women.

For every allegation that Saudi Arabia is a theocratic state with links to jihadi terrorism, the idea is to retort with a liberal projection of a stable and gradually reforming country where women are being empowered.

But when Saudi women covered in the abaya (head-to-toe loose robes) do start revving engines on the streets, it would not compensate for their overall second-class status in law where their testimony equals half of that of a male Saudi.

The World Economic Forum ranks Saudi Arabia 141st out of 144 nations in the Gender Gap Index, with only Syria, Pakistan and Yemen faring worse. Saudi women are at the bottom in terms of citizenship, and will remain so as long as there is a “Saudi” Arabia.