Unnao: It’s time to act, outrage is not enough

So when help is denied to a hapless citizen at all levels, it could not but end in tragedy of enormous proportion. 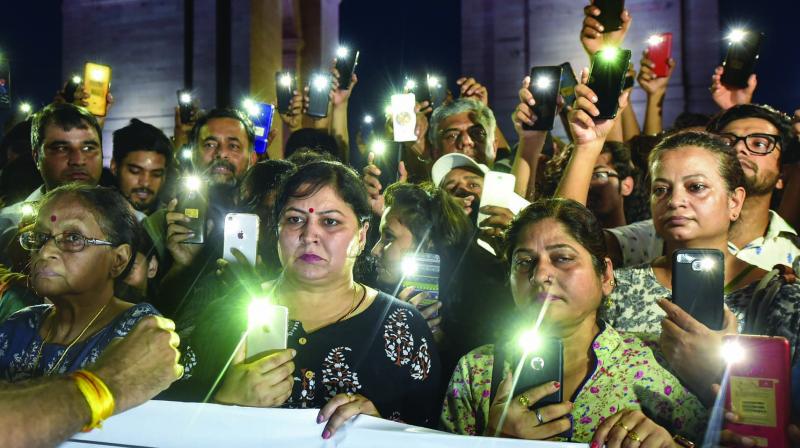 The Opposition parties would be tempted to use this issue as a stick to beat the BJP with. (Photo: PTI)

What is strikingly disturbing about the Unnao rape case, where the victim has been raped and gangraped, her father thrown into jail, beaten to death, the victim’s pleas to Uttar Pradesh chief minister Yogi Adityanath evoke a tepid response of an inquiry, which the police carries out unwilingly, the victim’s letter to the Chief Justice of India is handled shabbily by the registry of the Supreme Court, and the final murderous assault on the victim, her lawyer and her two aunts, which results in the death of the aunts and leaves the victim and her lawyer in a critical condition, fighting for their lives. At any point of time, this serial crime by the main accused, Kuldeep Singh Sengar, a four-time Member of the Legislative Assembly, could have been ended if the system had functioned as it should have. The rape should not have been followed by the gangrape, and by the death of the victim’s father in the police station. The chief minister should not have treated this as a usual crime. As the leader of the state, he should have cracked the whip when the victim reached his office and threatened to immolate herself. Sengar should have been expelled from the party then, and the police directed to do its job. He did not, and the police continued to dither. Neither did the BJP’s top duo, Prime Minister Narendra Modi and party president Amit Shah, until it was too late.

Things would have been slightly different if the rape victim’s cry for help had come to the notice of the CJI but the court’s registry, and not for the first time, played hookey. There was an earlier instance of those in the registry trying to push the case of Anil Ambani’s Anil Dhirubhai Ambani Group (ADAG) to come up before the judges. The CJI had himself expressed his helplessness in reforming the court’s registry.

So when help is denied to a hapless citizen at all levels, it could not but end in tragedy of enormous proportion. And at every stage, each one responsible for the failure to check the impunity of Sengar to commit atrocities without end should be named and shamed. No one should be allowed evade responsibility. And the only way they can redeem themselves is to own up to their share of the guilt in the sordid episode. Prime Minister Modi for once should give up his tactical silence and accept that the Unnao case is a shame for Uttar Pradesh, for the BJP and for India. He can, but he should not, take shelter behind the plea that unscrupulous men of power have always been indulging in crimes of the Sengar kind, and it is not peculiar either to UP or the BJP. He would be technically right but morally wrong. Unless the Prime Minister voices his anger and anguish, the message would not go out that Sengar type of crimes would not be tolerated. Mr Modi must pick up the political courage to speak out against the Sengars in the country. It is because there are umpteeen Sengars in the country that the Prime Minister must ring the tocsin.

The Opposition parties would be tempted to use this issue as a stick to beat the BJP with. It is certainly politically justified, but it would be shortsighted and immoral to do so. There are many Sengars across the political spectrum and beyond. The rabid violence that the powerful use against the powerless is an in-your-face phenomenon for anyone to feign ignorance about these things. The Opposition then has a moral duty to condemn Sengar and his likes for their diabolical tendencies, and not use Sengar to nail the BJP. The problem is deeper and wider, and it cannot be used to score brownie points.

At the heart of the problem is the pusillanimity of the police force in the country. They have to stop deferring to the powerful and the rich, stop treating the poor and the helpless with contempt. The police wil have to learn to respect and respond to the cry of the oppressed. This is a moral calling, and it has less to do with sophisticated methods of policing. Even as we find many Indian Administrative Service officers setting an example by reaching out to the poor, we need similar examples of senior police officers of defending the poor from the atrocities of the powerful and the rich. A few examples of exemplary policing would create a shining precedent. And cases like that of Unnao rape would not happen as frequently as they usually do in this country.

There should not be any doubt in anyone’s mind that Sengar is not an oddball. He is the norm of violence-prone bahubalis, the strongmen, of our public life. They are no less diabolical than the mafioso of Sicily. However late, the country as a whole has to sit up and take note if the high-handedness of the powerful has to end. These men have no fear of the law. The police force and the political leaders have to put the fear of law in the hearts of these outlaws in our midst.

It will also not help to pinpoint Uttar Pradesh as the backward badland in the country. It is indeed backward, and it is also a badland, but what has happened in Unnao is a frequent occurrence in many parts of the country. And that is indeed both dangerous and shameful. There is both the criminalisation of politics and politicisation of the crime, and these are not black and-white phenomena. Like the Mob in the United States, the mafioso are embedded in our political system. There is need to take them on as much as there is a need to confront the corrupt. This can only be done by a people’s movement of the kind that took place against the Mafia in Sicily in the 1980s. The police, the politicians and the judges cannot do it by themselves. They need the people’s support.