The ongoing political drama in Maharashtra, with its interesting twists and turns, may not have really ended with the swearing-in of Shinde 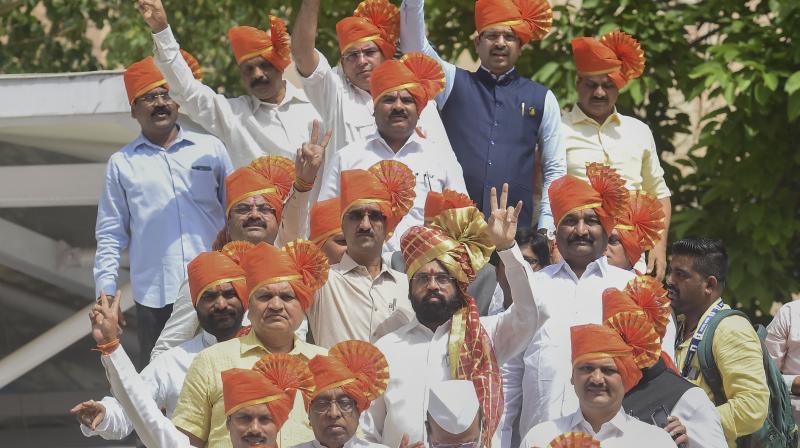 Maharashtra CM Eknath Shinde along with rebel Shiv Sena MLAs flashes the victory sign as they arrive to attend a special session of Maharashtra Assembly, at Vidhan Bhavan in Mumbai, Sunday, July 3, 2022. After the House proceedings begin, Sunday election for the post of Speaker of the House will be held. (PTI)

The ongoing political drama in Maharashtra, with its interesting twists and turns, may not have really ended with the swearing-in of Eknath Shinde, the Shiv Sena leader who rebelled against former CM Uddhav Thackeray, as chief minister and former BJP CM Devendra Fadnavis as deputy chief minister. On Thursday, Mr Shinde thanked 50 of his Shiv Sena colleagues, while the number in Guwahati was stated to be 39.

The BJP had 106 members, the single largest party, but it is now claimed that it has 120. So, the breakaway Shiv Sena and the BJP together have 170 members in a House of 287. The Shinde-Fadnavis team thus has a clear, winning majority. The vote of confidence, which is due to take place in the Assembly on Monday, is therefore a mere formality. And it can be expected that the BJP will not shake the boat and will guide the unequal coalition to survive till the next election.

But the issue of political alliances and shifts in ideological emphasis still remains. It has been argued by some critics of the Shiva Sena chief and former CM Uddhav Thackeray that he broke the coalition dharma of not accepting the electoral verdict of 2019 gracefully and play the role of the junior partner as his party had done in 2014. In the 2014 Assembly polls, the BJP won 122 seats and the Shiv Sena got 63.

In 2019, the BJP won 106 seats and the Shiv Sena 56. Both won fewer swats than before, but together they were in a majority. If Mr Thackeray was not happy with the BJP alliance after the 2019 verdict, he should have sat in the Opposition. The BJP and Devendra Fadnavis attempted to form a government with the help of the NCP’s Ajit Pawar, but this had turned out to be a fiasco. NCP supremo Sharad Pawar had worked out a coalition with Mr Thackeray, and made it work for two and a half years. Losing 39 of his 56 legislators, including several Cabinet colleagues, was a vote of no-confidence against Mr Thackeray in the legislative party. Then there was the issue of 18 Shiv Sena members in the Lok Sabha and three in the Rajya Sabha. How many of these MPs might be ready to move over to the Shinde camp is uncertain as well. Mr Shinde is not yet the leader of Shiv Sena until he wins control of the organisation. Mr Shinde must be thinking hard on how to win over the party in the state. But it has not happened yet. So while Mr Shinde and the BJP have won the battle, they are yet to win the war.

In some ways, the BJP central leadership’s decision to let Mr Shinde be the chief minister and asking Mr Fadnavis to be his second in command is seen to be a masterstroke. But it looks like an uncertain gambit. At one level, the party seems to have penalised Mr Fadnavis for his abortive attempt to form a government with the help of Ajit Pawar by demoting him. Second, the BJP either hopes to win a majority on its own in the next Maharashtra Assembly election, due in October 2024, and it would reduce the number of seats for the Shinde group while keeping a formal alliance going. It’s also more likely that Mr Shinde’s group will win fewer seats than the 39 it has now. So, the electoral uncertainties loom larger than ever. The BJP has not been able to win a majority on its own in the state. In 2014 it had 122 seats in the Assembly, falling 22 seats short of a simple majority. In 2019, it had even less, 106, and it was falling short by 36 seats.

The BJP leaders may be calculating that if they don’t have to share seats with the Sena, their electoral prospects in the state will be brighter. The alliance with the Shinde group could be a short-term one because it is unlikely Mr Shinde could bring in the whole weight of the Sena with him at a time when the Sena has half the numbers compared to the BJP in the Assembly. If Mr Thackeray is seen to have weakened the Sena by moving away from founder Bal Thackeray’s hard-Hindutva, and yielded the ground to the BJP, the BJP will have little use for Mr Shinde’s Sena even if he wants to reassert the Hindutva creed of the older Thackeray. The BJP can as well assimilate Bal Thackeray to the party pantheon.

Uddhav Thackeray has indeed steered the Sena away from its past as he seems to have realised that the party’s future lies in moderating its extreme stances that made it famous under his father. The Sena has also not been able to assert its hold in all parts of the culturally diverse state.

That is why the BJP possibly has as much influence across Maharashtra, and maybe even more, than the Sena. But on its own it seems unable to command a majority. They needed each other. Uddhav Thackeray’s bid to work out a deal with the Congress and NCP was not as bizarre as it might seem because the three parties, as of now, are of roughly equal strength. In the Sena-BJP coalition, the Sena is reduced to a junior partner. So Mr Shinde’s deal with the BJP might prove to be counter-productive for the Sena.

The inevitable question of the dominance of the Thackeray family in the Sena is of vital importance. The Thackerays’ hold over the Sena can be a liability like that of the Nehru-Gandhis in the Congress at the national level. The same problem haunts the NCP under Sharad Pawar. The Congress in Maharashtra has an independent structure, and a leader will emerge from among the rivals. The BJP of course does not have an independent democratic structure to allow leaders to emerge, either at the state or at the national level. Under Prime Minister Narendra Modi, the BJP has become a near-monolith at the national level, and it will remain so for some time to come.