When Modi and the BJP came back to power in the summer of 2019, the euphoria was confined mainly to the party 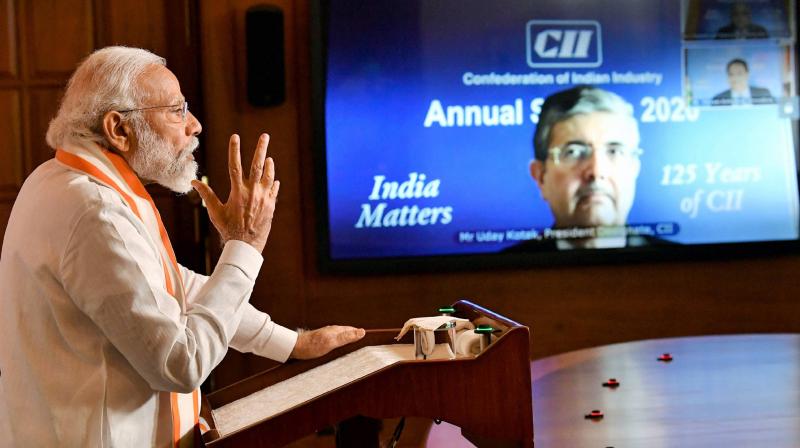 Political etiquette demanded that Prime Minister Narendra Modi and his BJP should have deferred marking the first year of their second term in office while the country is reeling badly under a pandemic and there was extreme economic distress all around.

The Prime Minister and his colleagues, of course, never much cared for sensibilities and sensitivities which appear to them as contemptible liberal decencies. They do not ever lose an opportunity to prove that they make their own rules and norms, and they do not intend to observe the political conventions that had evolved in the past 60 years and more. They consider themselves to be the “backwoods people” with practices and traditions that they had worked for themselves in the years that that they were in the political wilderness, and which they now practice in the corridors of power.

The lockdown perforce restricted the celebrations, but it did not come in the way of counting their brave deeds. It is also the case that the Prime Minister and the ruling party felt that they needed to pep up their mood in a period of gloom, and that they needed to recall their achievements in the past one year as well as in all the last six years -- some sort of patting their own backs and indulging in a bit of self-applause. It is not a bad idea in itself. Psychologists would approve of it wholeheartedly.

The Prime Minister then wrote an open letter to the citizens of the country, while defence minister Rajnath Singh and home minister Amit Shah wrote newspaper articles praising Narendra Modi the leader for transforming the country. The situation is such in the country that even the compulsive middle class and lower middle class (and the BJP’s own “neo-middle class”) may not have bothered to read the panegyrics that  Modi,  Singh and  Shah had written. And poor people, in cities, towns, villages and those on foot trudging on the national highways, would not even have known that the Narendra Modi government had crossed another milestone. But what did  Modi and his Cabinet colleagues have to say in their favour?

When  Modi and the BJP came back to power in the summer of 2019, the euphoria was confined mainly to the party. The country was dealing with a slowed-down economy, and finance minister Nirmala Sitharaman’s bid to whip up market sentiment in her first Budget in July was not very successful. She had to announce big supplementary measures in September to boost the economy, but they did not work as can be seen in the figures of Q3 and Q4 growth rates of 2019-20. The economic breakdown and the stress on revenue and expenditure caused by the Covid-19 pandemic will show up only in the economic figures of 2020-21. The Modi government will have to bear the cross of low economic growth of 2019-20, and the lukewarm performance of the first five years.

Shah had rightly enumerated the government’s legislation on criminalising triple talaq, after the Supreme Court held the practice null and void two years earlier, removing Jammu and Kashmir from the protective purview of Article 370, the bifurcation of the state and its demotion into a Union territory as well as the Citizenship Amendment Act 2019 among its achievements.

The BJP had no problem in pushing them through Parliament because of its 300-plus majority in the Lok Sabha and its clever muscling of the non-Congress, non-Communist political parties in the Rajya Sabha. These needed no delicate navigation through Parliament. They are brute expressions of their parliamentary majority, and though politically legitimate they remain morally questionable.

The decisions on Jammu and Kashmir are yet to show any positive outcomes in the new Union territory. But  Shah declaring a political victory in the matter is understandable. Similarly, the CAA 2019, which was basically meant to address the issue of Bangladeshi Hindu migrants in Assam, has only angered the Assamese, including ardent BJP supporters in the state.  Shah could have avoided claiming the Supreme Court’s judgment in the Babri Masjid-Ram Janmabhoomi case in Ayodhya because though it is an ideological victory of the party and its ideological affiliates, it should not give the impression that the government had any role in the judgment. It was case between two private parties representing a section of Hindus and Muslims, and the government, whichever the party in power and whatever its ideological colours, had nothing to do with it. The Ayodhya issue was part of the political agenda of the BJP since the 1990s, and  Shah can rightly say that it is a victory and vindication of the BJP’s stand. But this is not to be counted as a success of the Modi government’s first year in office.

A conspicuous feature of  Modi’s first year of his second term in office is the absence of any political opposition that counts in the country. The sense of comfort and complacence that the leaders of the ruling party must be feeling is understandable, but it is also the chink in the Modi-BJP armour. The tone of arrogance in the BJP leaders in the party and government could put them on the slippery of path of capriciousness.

The Congress, which despite being a party in tatters, is the only one standing in the field. But it does not count because it continues to squeal when it ought to be thundering. The other parties seem to be playing the role of puppets, instead of a real Opposition.  Modi and the BJP could not have asked for anything better in political terms. But their unassailable political position does not in any way help them tackle the challenges of a broken-down national economy.

Modi still believes in the mantra of catchwords like “Atma Nirbhar Bharat” to tide over the economic and social crisis he faces in the wake of Covid-19. He and his colleagues are so self-hypnotised by their own verbal charms they are unlikely to notice the misery of ordinary people in the country.