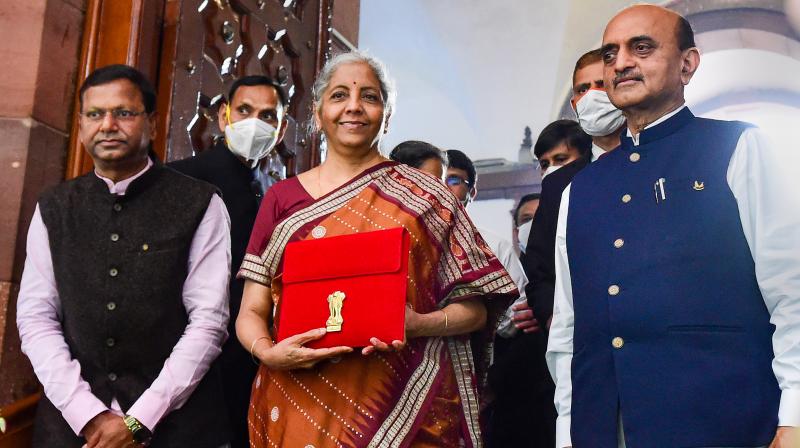 Union Minister of Finance Nirmala Sitharaman with Ministers of State for Finance Bhagwat Kishanrao Karad and Pankaj Chaudhary on her at Parliament for the presentation of the Union Budget 2022-23, in New Delhi. (PTI/Kamal Kishore)

Growth, or the lack of it, has been India’s primary concern since 2017-18. Consensus, however, is elusive on how to get growth restarted, not least because the Covid-19 pandemic has thrown up competing priorities around relief for those who have suffered economic and health damage.

The expectation is that “growth” will come centre-stage from the next fiscal year as the pandemic becomes a bad memory and the existing combination of economic drivers allow the economy to wind back to its 2019-20 equilibrium. Sadly, this was a low-level equilibrium and hence the search for a solution to create a more virtuous cycle.

There are many good things in the FY 2022-23 Budget. But an answer to recover the growth impetus is not one of them. The 2022-23 Budget has chosen the route of public investment-led growth. The last “normal” year -- FY 2019-20 -- had sub four per cent real GDP growth. To take it to the 8-8.5 per cent of GDP that was suggested by the Economic Survey would require additional capital infusion of at least Rs 16 trillion (seven per cent of GDP), assuming a low incremental capital output ratio (ICOR) of four (four units of investment generate one unit of output).

Government investment constituted just 23 per cent of total investment in 2019-20. Maintaining elevated public investment levels without a matching increase in tax to GDP ratios -- which remain stubbornly stable -- would risk higher inflation. Public debt is at 90 per cent of GDP versus the targeted 60 per cent.

Even the choice of 11.1 per cent nominal GDP growth for the next fiscal reflects the possibility that either inflation must quickly reduce to three per cent with eight per cent real growth, or if inflation remains elevated at five per cent, real growth will reduce to six per cent.

To be sure, even if a road is not complete, just building a part of it does generate sorely needed jobs and develops skills on the ground. But the economic benefits remain limited. Instead, putting income in the hands of people to survive (where markets are functional) could be a better option than offering them low-productivity temporary jobs. Add to that, the disadvantages of spatial human dislocation through migration, which large projects entail, and the advisability of such projects as a relief measure becomes even more doubtful.

Conversely, however, large projects are good for the formal corporate sector, since working at scale enhances profits. Sadly, the Budget ignored extracting as additional tax surcharge a part of the supra-normal profits that were earned by big corporates over the last two years, accompanied by higher market valuations on the back of low interest rate-fuelled domestic and foreign funds inflows.

The Budget does well to pare down new schemes to the minimum. The Narendra Modi government has been hyperactive in launching new schemes. Consider, that in 2017-18 the Union Budget funded 73 major schemes. Their number has increased by 2022-23 to 103.

The finance minister has courageously abandoned the virtuous stance of fiscal rectitude over the last two years of the Covid-19 pandemic. It is heartening that she now intends to traverse a gradual glide path to a fiscal deficit of 4.5 per cent of GDP by 2025-26. Inflation is already high in India (CPI 5.9 per cent) and abroad.

Interest rates will harden over the coming fiscal. Global and domestic uncertainties abound, around the speed of normalisation and the prospects for lower prices for petroleum fuel, the bulk of which we have to import.

High inflation hurts the poorest and is a graveyard for governments. Reducing excise duties on fuel can help. But it entails a significant loss in revenue -- Rs 3.3 trillion for the Union and Rs 2.2 trillion for the state governments (ORF2020) together 2.5 per cent of GDP. Alternatively, reducing import duties can lower consumer prices. But this contradicts the strategy of privileging domestic job creation and domestic producers.

Five new projects to link rivers are proposed. The Ken-Betwa link, in Madhya Pradesh and Uttar Pradesh, is the first. For water-scarce India, harnessing water resources sustainably is a priority to guard against climate-driven disruptions in rainfall patterns. But enlarging India’s forest coverage is also part of the strategy to reduce carbon emissions. Natural forests are denser and more efficient carbon sinks. “Zero damage to natural forests” is a good strategy for reaching Net Zero in 2070 and a cautionary red flag for such terrain-altering large projects.

The Budget is also heavy on proposing digitisation as a tool for enhancing efficiency and generating public data -- the new oil. But guarding against vanity “sunrise” projects or not attempting to “buy into” the success of easy-to-commercialise technologies, where private interest abounds, is advisable. The “blue skies” proposals should be ranked for social and economic cost effectiveness before any large outlays get committed.

The finance minister has restored the transparency and credibility of the budgetary process. Her newly-found brevity in the Budget speech is a tribute to her capacity to abandon inefficient path dependencies. Enhancing the structural integrity of the Budget proposals should be the next step.