Even on the Covid front, situation in UK is getting worse rather than better 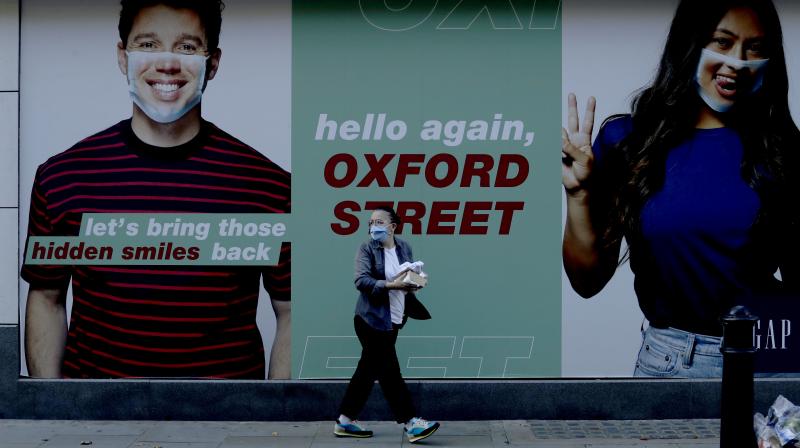 A woman wearing a face covering to curb the spread of coronavirus walks past the window of a GAP clothing store just off Oxford Street, in London, Monday, Nov. 2, 2020. British Prime Minister Boris Johnson on Saturday announced a new month-long lockdown for England that will start on Thursday, after being warned that without tough action a resurgent coronavirus outbreak will overwhelm hospitals in weeks. (AP)

Since there has been very little to cheer about during the pandemic — here is something a little uplifting. Hopefully enough to make our desi hearts beat faster: we are going to have new statues in Leicester Square, of Shah Rukh Khan and Kajol from Dilwale Dulhaniya Le Jayenge on the 25th anniversary of its release. Of course, the movie itself was a globe trotting romance, and Leicester Square was part of it. So Kajol and SRK will join Paddington Bear, Harry Potter and Mary Poppins in ‘Scenes in the Square’. These statues will be lit up every evening — and will no doubt push the Indian community to troop down to the square and pose for selfies with the stars.

The Director of Destination Marketing at Heart of London Business Alliance, Mark Williams, said in a statement: “It’s fantastic to be adding such titans of international cinema to our trail as Shah Rukh Khan and Kajol. This statue is a fitting tribute to the global popularity of Bollywood and the cultural bridges that cinema can help build, and we’re in no doubt it will attract fans from all around the world.”

The weather is definitely turning wintry. Even on the Covid front, things are getting worse rather than better. The second attack of the infection is now here to stay. There is a deep division across the country on how to handle it. There is no nationwide circuit breaker (a short total lockdown) that many want imposed. A more complicated system like a traffic light signal has been worked out — and only some parts of the country are in lockdown, as in the North. London has no lockdown, but just a few rules such as restrictions on pubs, which have to close early and no more than six people meeting at once. Or it may be only two. It is very difficult to know what the rules are as they keep changing! Better to just stay at home and go through the albums remembering what it was like to meet people!

At this rate, we are gearing up for a digital Diwali. The restrictions on people getting together from different households means some relatives will be left out, and this will definitely impact our relationships. Who do you invite and who do you leave out? Things may not improve by winter and it promises to be a blue Christmas… Fortunately the Scottish government has ruled that Santa Claus does an ‘essential’ job so he is allowed to go down chimneys and deliver Christmas presents to children. The “six or less” rule does not apply to him. The reindeers must be Covid-free of course!

School-meals have now raised a political storm. There are many children here from poor families who depend on these free meals. (Yes, even in the UK!) Marcus Rashford a young talented football player who plays for Manchester United had persuaded the government that the scheme for free lunches be continued during the holidays. He was reflecting on his hard childhood. This was done (or so we thought). He even got an honour from the Queen for his brilliant suggestion. Alas, the government is refusing to continue the free meals during half term. But the community has risen to the challenge. Local councils are paying up and restaurants and hotels are chipping in. McDonalds have donated a million Macs to feed these marginalised children. Britain has a big heart!

With online viewing an essential part of our survival kit, BBC has revived their very popular show, Strictly Come Dancing. This is where serious dancers pair up and get judged for executing some really complicated routines. The audience also votes by e-mail or phone to select the winners. The show has offered a great revival to the sagging careers of retired politicians and journalists and made their popularity soar: Ed Balls who was a Cabinet minister under the Labour government and an economist had a successful stint going through many rounds. Now Jacque Smith (Home Secretary in the Tony Blair government) is trying her luck. At least we know that there is life after politics and it is called dance!

Mental health has become a big problem during the pandemic as people find staying at home very tough. It has specially impacted the youth who have found that their school, college and job participation has fallen apart. The British Asian Trust has launched an emergency appeal to help the sufferers of mental health problems. Rakesh Chauhan has composed a music video Neelam’s Song — shown on YouTube, where through some very Indian-style dance and song the problems of mental health have been flagged. Prime Minister Boris Johnson has praised Rakesh for his ‘tremendous efforts’. But we need to do more for all age groups. Covid stress will stay on for a long time — and there is no vaccine against it.