If we don’t take immediate measures to mitigate the larger human crisis the lockdown has triggered, we are heading towards a catastrophe 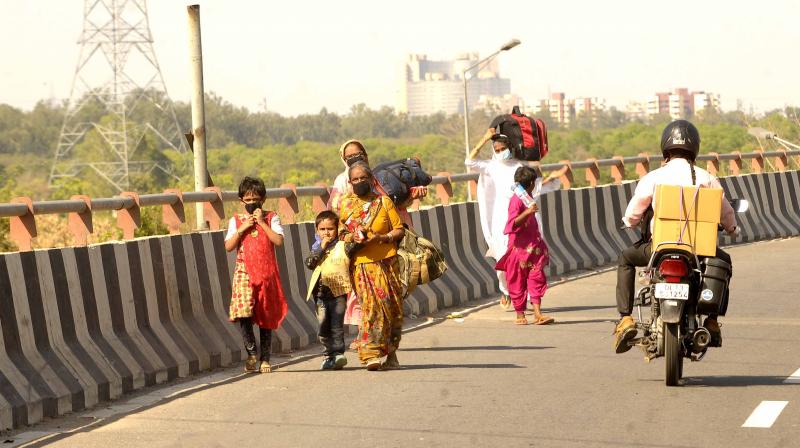 Migrant workers make the journey to their respective villages on foot following the nationwide lockdown amid the coronavirus epidemic in New Delhi. (DC Photo: Pritam Bandyopadhyay)

Photographs and reports of India’s migrant workers walking down our nation’s highways in the past week, with hunger in their bellies and bags perched on their heads, have exposed one of our worst-kept secrets. Those who build our cities, houses, hospitals, hotels, multiplexes and do lots of things that make our lives in middle class urban India comfortable are neither an administrative nor societal priority.

The men, women and children who set out on foot from Delhi and other cities for their “homes” in villages thousands of miles away, in the wake of the Centre’s three-week lockdown — did not suddenly pop up out of nowhere in the middle of Covid-19.

They are part of the 'informal sector' which keeps the Indian economy whirring. These are people who typically have no contracts, nor social security, nor any other benefits. They are not covered by the usual labour laws.

Their exodus from the big cities, once the three-week lockdown to curb the spread of the new coronavirus kicked in and work dried up, has made them a lot more visible in the national discourse. But they have been part of the Indian cityscape for long. Their numbers have been growing; their lives remain precarious. Many have chosen not to notice.

How else do you explain the biggest lockdown in human history being operationalised without paying the slightest heed to the stark realities of the lives of millions of migrant workers?

The Centre has now told the Supreme Court that the exodus was triggered by a rumour that the lockdown would extend for three months. This ignores the fact that most of these people could not have survived three weeks without earning their daily wages. Already there are reports of migrant workers battling acute hunger in a slum on the edge of middle-class New Delhi.

Once the exodus started, state governments opened soup kitchens and appealed to NGOs to do the same. Clearly, no one in the government had thought of the possibility of this exodus before the lockdown was clamped. The relief measures that were started in a hurry are just not enough, given the numbers.

The Centre has now asked state governments to quarantine migrant workers for 14 days and prevent the movement of people across state borders to contain the spread of the new virus and prevent transmission in the rural hinterland. But many are already home, and no one knows if they are infected.

Public health experts have pointed out that for any kind of Covid-19 lockdown to have the desired impact, it must be preceded by meticulous planning, so that everyone can prepare, essential supplies are available to the poorest and most marginalised, there are transport arrangements for those who wish to get back home and there is clear communication with the public before the lockdown kicks in.

In the absence of this, what happens is what we have been reading about and seeing on our television screens for the past few days.

A lot of conspiracy theories are floating around about the migrant exodus. But if you listen to what many of the migrants themselves are saying, it is clear that the suddenness of the announcement and the suspension of all public transport was what led many of these daily wage labourers to attempt the journey back to their villages on foot despite the scorching sun and gnawing hunger. Among those who embarked on such journeys on highways, more than 20 are dead.

As the lockdown enters the second week, it is important to have a national conversation about what these images of despair and abject powerlessness truly mean and policy and data gaps on migrant workers.

In the cities where they work, politicians pay scant attention to migrant workers because they are registered as voters in their villages. Another key reason for so much of policy apathy towards them and why their realities are not factored in during decision-making is their near invisibility in official statistics.

In a 2019 article in Ideas for India, an economics and policy portal, migration scholars Divya Varma of Aajeevika, an NGO that focuses on migrant labour, and Divya Ravindranath of the Indian Institute for Human Settlements pointed out: “Despite the scale of migration, seasonal migrant families lead invisible, isolated lives as they remain dispersed across the wide canvas of the city. Devoid of voting rights in the urban destinations that they help build with their labour, their lives are stripped of any form of political voice or agency.”

The Economic Survey 2016-17 noted that while Census data is useful to understand certain aspects of migration, it has limitations in capturing “circular migration” and female migration for work. Circular migrants are individuals who migrate from place to place for temporary periods. “If the share of migrants in the workforce is estimated to be even 20 per cent, the size of the migrant workforce can be estimated to be over 100 million in 2016 in absolute terms,” the survey noted.

Out of the over 100 million circular migration workers in India, perhaps 30 million are “really short-term seasonal migrants”, says Chinmaya Tumbe, professor at the Indian Institute of Management, Ahmedabad, and author of the much-acclaimed book India Moving: A History of Migration.

The policy apathy towards migrant workers also arises because of what Tumbe calls “a historically sedentary policy bias, which is only now changing slowly”. Public policies are geared towards providing welfare services only in one’s place of birth. The seasonal migrants often lose out on many benefits because of this.

What really works against such migrant workers is their “informal” status. They often have no paper trail. This encourages a culture of impunity. Those who hire them for temporary work feel little obligation towards them, which explains why they were tossed out of their workplaces when the lockdown started.

Exodus photos are petering out, but the lockdown can still make things a lot worse for these people, even if they have managed to reach their villages. There are no sources of livelihood there, which is why they had migrated in the first place. How will they live now? If the government doesn’t take immediate measures to mitigate the larger human crisis that the lockdown has triggered, we are heading towards a catastrophe.