The reported incidents of lives being lost and properties targeted were not the result of mob frenzy. 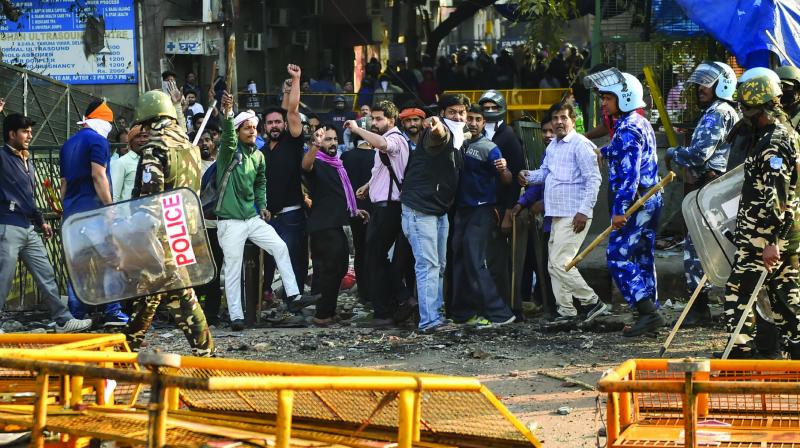 Whether 1984 is talked about or 1992, both years were witness to communal frenzy marked by Indians killing Indians. (Photo: PTI)

In the immediate aftermath of the mayhem in Delhi, the communication strategy of those involved in the provocation of violence needs to be scrutinised carefully. The reported incidents of lives being lost and properties targeted were not the result of mob frenzy. In fact, India needs to be credited for having come a fairly long way from the times when groups of people could easily be provoked into communal violence on religious issues. This reality has not yet sunk into the minds and hearts of those still being guided by the assumption that it is not a difficult task to incite people of different religious groups into engaging in communal violence. But if this were to be the case, not just northeast Delhi but the entire national capital, and may be the nation, would have been up in flames.

So let us analyse the various aspects of what happened in Delhi. Initially, in response to a petition filed by social activist Harsh Mander for investigating the violence in northeast Delhi, the Delhi high court bench, headed by Justice S. Muralidhar, stated, “We’ll not allow a repeat of 1984. Not under the watch of this court.” Here, the judiciary did play its part even as continuation of the violence signals the limited impact that it had. But certain outlets of communication chose to simply reiterate this statement. What did the latter gain from giving importance to only 1984? Why wasn’t the same consideration accorded to 1992 and even Gujarat 2002?

Perhaps, as 2002 was confined to Gujarat, it was not mentioned by them. But the same cannot be said for 1992. It is well-documented history that, following the assassination of then Prime Minister Indira Gandhi in 1984, Delhi witnessed riots in which thousands of Sikhs were killed, allegedly at the behest of Congress leaders. The demolition of Babri Masjid in Ayodhya on December 6, 1992, was accompanied by an anti-Muslim communal frenzy provoked by the saffron brigade in most parts of the country.

While the Ayodhya issue is politically dead, certain extremist elements are still engaged in poisoning the minds of people with anti-Muslim rhetoric. Yet, during the initial phase of bloodshed in Delhi, the slogan circulated focussed on 1984 and not 1992. Two inferences may be drawn from this. One is that the extremist elements responsible for provoking anti-Muslim hysteria hoped to also conduct, to some degree, a negative campaign against the Congress. Second, they apparently hoped that reviving the memories of 1984 would give them access to the Sikh mindset. Some right-wing elements seemed quite frustrated by Citizenship (Amendment) Act protesters receiving the support of Sikhs. They hoped that a reminder of the 1984 riots would draw Sikhs closer to the Hindutva brigade and thus away from anti-CAA resistance. This perception, evidently, has fallen flat. Sikhs have gone out of their way to ensure safety in gurdwaras for Muslims hit by the violence.

Whether 1984 is talked about or 1992, both years were witness to communal frenzy marked by Indians killing Indians. It is possible that the issue of not repeating 1992 was not mentioned as essentially this was (and perhaps is) not the purpose of the message. Anti-Muslim propaganda doing the rounds seems clearly inclined towards once again inciting the majority against the minority community on the ground of religious differences. Incidentally, the inhumane manner in which some individuals have been brutally injured or killed and their properties destroyed is only suggestive of attempts being made to re-enact the 1992 bloodshed and the 2002 Gujarat carnage.

Describe it as humanitarian and/or Indian, but help extended by the people to one another, cutting across religious lines, bears its own significance. It proves that this communalism is not truly an outburst of mob frenzy. The tag, “religious”, cannot apply to the violence. It would be erroneous to even describe rioters as “religious” for that would be equivalent to denigrating whichever religion they belong to. Humanitarianism is, after all, the basic principle of all religions. The present rioting appears to have been well-planned with a set agenda. That includes a negative campaign against the Opposition, particularly the Congress and Muslims. The rioters primarily included “external elements”, groups of people from outside the targeted areas.

The Delhi mayhem seems to be a continuation of the incidents of hooligan and/or police violence at Jawaharlal Nehru University, Jamia Millia Islamia, Aligarh Muslim University and other places where anti-CAA protests have taken place. The difference is that the 1984 angle was not brought in during these instances. Outsiders, with apparent support of policemen, seemed to comprise the bulk of the perpetrators in all these cases. Except in JNU, an anti-Muslim bias when it comes to choosing the victims is visible in all these instances. One failure after another has apparently led extremist elements to try their hand at worse and worse

They are chafing at the continuation of the anti-CAA protests and tasting defeat in the Delhi Assembly elections.

Intriguingly, little importance was given by analysts to the timing of the Delhi bloodbath. It took place in the national capital at a time when United States President Donald Trump was visiting. It may well have been a ploy to show him that India was being troubled by terrorism fomented by Pakistan. This may be linked with the greater circulation of “news” about “jihadis” (Muslim extremist/terrorists) supported by and/or from Pakistan being responsible for the violence in northeast Delhi. This communication strategy has failed. Hindutva extremists have largely been blamed for the violence in Delhi.

There is yet another angle that needs attention. Instigating violence of this kind may be a strategy by the political leadership to divert the attention of the people away from its failure to control inflation and solve economic problems. People are fed up of their Pakistan card and no longer moved by the Ayodhya subject. Shaken by reports of loss faced by victims, a large number have opened their homes and hearts to them. They have not shied away from blaming the Central and state governments for not taking steps to instantly check the violence. Communication is not just at the command of leaders desiring to spread unrest though they seem oblivious to this reality. For it is interpersonal communication among Indians that is keeping Indian secularism alive.

Here interpersonal communication implies individual and groups of Indians going out of their way to help the victims of violence. The lives lost cannot be brought be back. But at least this phase of violence spells a lesson for us all. Indians don’t take long nor wait for official permission when it comes to helping other Indians in grief. Hats off to each and all of these Indians!