Mr Modi has a right to his own dreams and visions for the country, however much we may disagree with its dystopian dimension 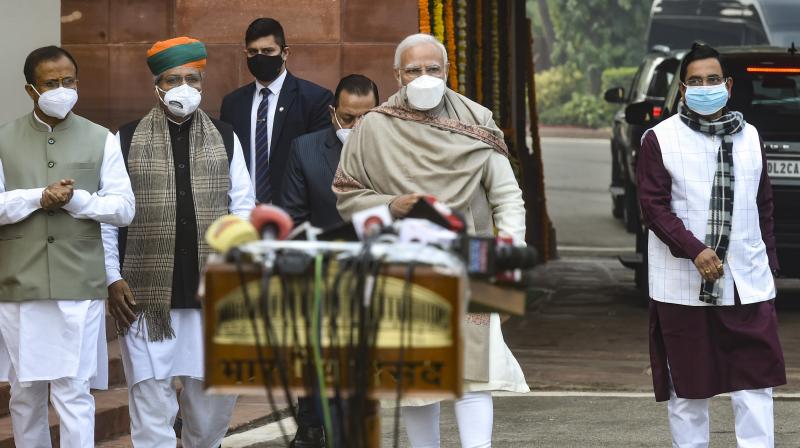 Prime Minister Narendra Modi arrives to address the media, ahead of the Budget Session 2022, in New Delhi, (PTI Photo/Arun Sharma)

It is unfortunate that in a 20-page, 118-paragraph Part A Budget speech, Union finance minister Nirmala Sitharaman could bring herself to say only briefly and fleetingly at the beginning: “At the outset, I want to take a moment to express my empathy for those who had to bear adverse health and economic effects of the pandemic.” This seems to have come more from the finance minister as a personal expression and not that of the government. In the last two years, she has been the only one in the Narendra Modi government who displayed some “empathy” for those beaten down by Covid-19 and its deadly effects. But the words chosen are so neutral, and in this context callous, as this government is little bothered about people. This callousness is again seen in the paragraph that follows: “The overall sharp rebound and recovery is reflective of our country’s strong resilience.” The personal and economic trauma of tens of thousands of people, especially during the devastating second wave of the Delta variant last summer, is not even a blip in the mind of this government.

Economic Survey that was placed in Parliament Monday. The Economic Survey presented a modest and realistic picture of the state of the economy. What we heard on Tuesday was a vacuous rollout of many technological changes that the government would like to promote in the country in the next five years, fancifully termed “Amrit Kaal” to mark the time between the 75th anniversary of Independence to the 100th in 2047, the quarter century between now and then. It was completely out of place in an annual Budget speech. The plan, it doesn’t matter whether it is realistic or not, seemed more like a BJP election manifesto for 2024, and the Prime Minister seems to have felt there can be no better occasion than this to unveil his barren vision of a technology-driven India, where people will lead a soporific life aided by a digitised administration and economy.

Mr Modi has a right to his own dreams and visions for the country, however much we may disagree with its dystopian dimension. And as a twice-elected Prime Minister, he can spell out the contents of his dreams through the Budget speech of his finance minister. The Prime Minister has been hard at work to depoliticise the democratic processes in this country, and he has found an effective way of doing it through the opium of technology. Part A of the Budget speech is a good example of the PM’s look-away-from-the-present and look-into-the-far-future approach towards governance.

Solipsism is intellectual escapism, and one cannot question the right of the Modi government to practise it. But the traumas and hurdles facing the people and the country in 2022 are not going to disappear because the government refuses to face up to them or talk about them. The economy will of course rebound, and it will not be because of the 25-year perspective plan unspooled by the finance minister. It will be because over a billion people are eking out their livelihoods and the government lives off their efforts through increased collections of Goods and Services Tax (GST). Of course, Ms Sitharaman thanked the people for making GST a success. There is no evidence in Ms Sitharaman’s speech that the government will spend its tax earnings on the needs of the people, or on the health infrastructure in the country. It’s as though the government, like the obnoxious taxman, has collected the money and gone his way, and the people are supposed to be thankful they have been left alone.

The government hopes to pass over the political and economic potholes with its eyes glued firmly towards 2047. The gambit of the Prime Minister seems to be paying off. In 2014, he pointed to 2019, the 150th birth anniversary of Mahatma Gandhi, and to 2022, the 75th year of India’s Independence. In 2022, he is pointing towards 2047, the centenary of Independence. He is saying in so many words that do not mind the unpleasant present, just keep your eyes fixed on 2047. It has been the case that the economy has trundled along since 2014 and the people fended for themselves through the bad times that stretched from the 2016 demonetisation to the 2019-21 Covid-19 scourge.

Ms Sitharaman’s 2022 Budget speech should stand out for its political impudence in passing over the economic challenges facing the people and pointing out to isolated phenomenon like the start-up successes of unicorns. The unicorns have raised money from the market, but they have not really produced any ripple effects if not multiplier effects.

Exigencies and uncertainties are looming on the horizon. Though the Covid-19 pandemic has partly receded, global health experts are warning about the need to prepare for another health crisis which may well be of Covid proportions. The Economic Survey has pointed out though that the Indian economy is poised to grow if there are no further Covid-type disruptions and if oil prices hold. The boast that India is the fastest growing major economy is of little solace if political and economic crisis in other parts of the world were to rock the Indian economy. Mr Modi is indeed the political Pied Piper who keeps people’s minds away from the nagging reality. He is telling people: just look to 2047.