K.C. Singh | India caught in a fix on dealing with Myanmar 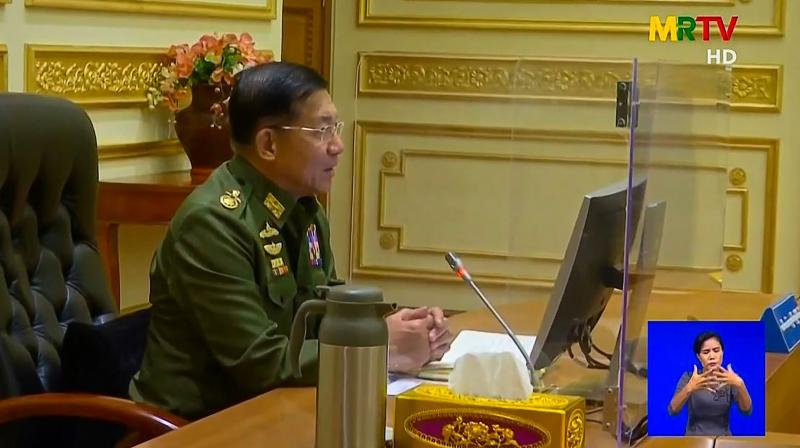 India is now caught between Biden administration’s call for united action and the traditional Indian policy of playing both ways. (Photo:AFP)

The military coup that took place in Myanmar early on Monday morning took the world by surprise. It was generally assumed that the second “free” election on November 8, 2020, despite the quasi-democratic constitutional arrangement with the Army retaining control over the security agencies, was merely strengthening democracy. The world was distracted by US President Donald Trump refusing to concede defeat after the November 3 presidential election and the re-spiking of Covid cases across the developed world. The Myanmar Army’s allegations about election fraud were thus largely ignored. If the coup’s occurrence should not have been a surprise, its timing and reasons need examination.

The timing was dictated by both domestic and international factors. The new Parliament was meeting on February 1 to endorse the election results. Aung San Suu Kyi’s party, the National League for Democracy (NLD), had bagged 396 out 476 seats, constituting 83 per cent, after a 70 per cent turnout. The country’s constitution allows the Army to nominate a quarter of the seats, but the Union Solidarity and Development Party (USDP), that it backed, won merely 33 seats. This lopsided verdict tilted the balance of power, maintained precariously over previous five years, in the NLD’s favour.

Moreover, the Army chief, Gen. Min Aung Hlaing, is retiring in the next three months. He and his family are rumoured to have a vast network of businesses, for decades the bane of military rule.

The principal international factor would be the taking over of US President Joe Biden. Gen. Hlaing and three colleagues were sanctioned by the Trump administration in December 2019 for genocide against the Rohingya Muslim minority in 2016-17. The Biden administration is likely to be even more strict in enforcing human rights and international humanitarian law. In retirement, the good general would have perceived an existential threat to himself, his family and business interests. This is despite Ms Suu Kyi having even blotted her international image as a defender of human rights, in protecting the Army against charges of genocide, by deposing before the International Court of Justice. The charge had been brought by Gambia, a member of the Organisation of Islamic Conference (OIC).

China would be the obvious beneficiary of the coup as its modus operandi of suitcase diplomacy works best when decision-making is opaque and autocratic. Moreover, as its international isolation increases, the Myanmar regime will be driven even deeper into China’s embrace. This is despite Ms Suu Kyi courting China even to the extent, it was speculated, of making the generals nervous. China can now expect more seamless cooperation and the expansion of China Myanmar Economic Corridor (CMEC), mirroring to India’s west the CPEC running through Pakistan. This happens as despite assurances secured by external affairs minister Subrahmanyam Jaishankar during his three-day visit to Sri Lanka last month, Sri Lanka has just reneged on the Trincomalee oil storage deal. The politically resurrected Rajapaksa clan is deepening its old China alliance. As a former envoy to that nation, Mr Jaishankar will have some explaining to do on how India has lost traction to a rival power.

The international reaction to the Myanmar coup has been along expected lines. The United States proclaimed that it “opposes any attempt to alter the outcome of recent elections”. US secretary of State Antony Blinken pledged that they “stand with the people of Burma in their aspirations for democracy”. Finally, President Biden has urged international community to “come together in one voice”. British PM Boris Johnson, already on the backfoot over China’s repression in Hong Kong, condemned the coup as unlawful and asserted that “the vote of the people must be respected and civilian leaders released”. Australia also intoned with similar sentiments. The European leaders were quick to condemn the coup but are likely to take longer to build a consensus on action against the junta. Unsurprisingly, China simply refused to go beyond noting the events.

India’s reaction was interesting as it joined the international outcry. In the past, India has oscillated between supporting the democratic forces in Myanmar and engaging the juntas to safeguard its crucial interests, such as the issue of Indian insurgents taking refuge within Myanmar. In fact, Ms Suu Kyi, despite having been educated in India, seems to harbour residual resentment over being mostly abandoned by India during her decade and a half of internment.

Two issues complicate India’s approach to the new developments. One, the BJP clearly sees the Rohingya issue almost entirely via the religion prism, as it plays well in its politics in Assam, in the past, and now in West Bengal. The arrest and internment of persecuted neighbourhood Muslims, illegally in India, links directly to the discriminatory Citizenship Amendment Act, which only provides succour to non-Muslims. Thus, the question arises to what extent the Indian government might be willing to go to condemn the genocide by the Myanmar Army and join the international community in sanctioning them. Of course, the release of elected leaders and restoration of democracy has now become the main issue.

The other point is the conflict generally between the government’s domestic politics, increasingly majoritarian, and its foreign policy where India has traditionally stood beside nations espousing liberal democratic values, including treatment of all citizens equally, whatever their faith, caste or creed. Can this charade be maintained without India being called out for its hypocrisy? For instance, this schizophrenia was obvious when on Mahatma Gandhi’s death anniversary Saturday, a hashtag on his assassin Nathuram Godse was trending on the social media without a word of criticism from the government. However, the government simultaneously made a strong demarche to the United States about the vandalising of Gandhiji’s statue in Washington.

India has had good links with the Myanmar Army. In October 2020, India gifted a Kilo-class submarine to Myanmar. India’s vaccine diplomacy also covers that country. Currently, the emergency declaration is for one year. The military junta is claiming that it was only to restore constitutional rule and hold fair elections, as different apparently from the one in November.

India is now caught between Biden administration’s call for united action and the traditional Indian policy of playing both ways. But, more than ever before, India will find the balancing more difficult, caught between its domestic political biases, its claimed strategic ties with Washington, its worry over the Chinese ascendancy in a vital neighbourhood as well as its dependence on whoever runs Myanmar for the security and development of its northeastern region.