The field hospitals were handed over to the Army, and Cuba offered 1,000 medical scholarships to Pakistani students. 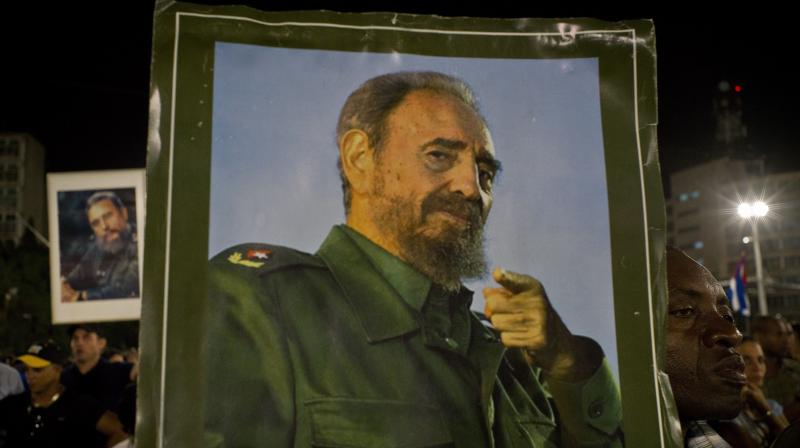 A picture of Fidel Castro is held during a rally honoring the late Cuban leader at the Revolution Plaza in Havana, Cuba. (Photo: AP)

When an unprecedentedly devastating earthquake struck Pakistan’s northern regions and parts of Kashmir 11 years ago, “one of the most heart-warming” messages of sympathy Gen. Pervez Musharraf received came from an unexpected source: the President of a tiny, faraway island said the ensuing agony among the millions of survivors was giving him sleepless nights.

The President of Cuba offered to immediately send across 200 doctors and auxiliary medical staff. Musharraf initially agreed to 50. The first Cubans arrived within less than a week of the quake. By the time they left more than seven months later, the contingent had grown to almost 2,500. Half of them were women, and all-female teams were able to provide medical relief and succour to hundreds of thousands who would have been reluctant to seek treatment from male medics.

Dozens of field hospitals were set up in areas unfamiliar with such facilities, providing relief not just to earthquake victims but innumerable others whose ailments had gone untreated over the years. There were reports that some of the Cuban women shamed our jawans into assisting them when they trudged on with their backpacks across mountainous tracks deemed unsuitable for Army jeeps.

Musharraf expressed his profound gratitude when the Henry Reeve Brigade, named after an American volunteer who had fought for Cuban independence in the 19th century, concluded its mission in May 2006, having stayed longer and worked harder than smaller teams from other countries and aid agencies. The field hospitals were handed over to the Army, and Cuba offered 1,000 medical scholarships to Pakistani students. On their return to Havana, the doctors found a familiar figure waiting to greet them and offer his thanks. They were personally received by Fidel Castro — derided by ideological adversaries over the decades, and most particularly since his demise last Friday at the age of 90, as a brutal dictator and murderous tyrant.

In My Life, a 2006 tome put together by Ignacio Ramonet, based on 100 hours of interviews with Fidel, and probably the closest approximation of a Castro autobiography, the Cuban leader says in reference to the Pakistani catastrophe: “I don’t recall a worse natural disaster, given the place in which it happened, the humble community it has affected… and just before winter, over there where there is such intense cold and such terrible poverty.” Could these conceivably be the words of a psychopathic megalomaniac?

Cuba’s history of providing medical assistance stretches from a 1960 earthquake in Chile to the recent Ebola epidemic in Africa, and it is by no means restricted to natural disasters. A consistent focus on education — vast illiteracy was eradicated within a year or so of the 1959 revolution led by Castro — and healthcare led to a surplus of doctors, which has steadily benefited deprived or beleaguered communities across the Third World.

But when Algeria declared nine days of mourning for Castro it did not just have Cuban medics in mind. The Algerian war of independence in the early 1960s was among the first such struggles in which Fidel’s Cuba chipped in. When Nelson Mandela greeted the Cuban leader with open arms in 1991 and echoed the slogan “Viva Fidel!”, it was in acknowledgement not just of assistance to the African National Congress but of Cuba’s military role in thwarting an invasion of Angola spearheaded by South African mercenaries. Their defeat irrevocably contributed to the demise of Apartheid.

None of the foregoing is intended to suggest that Fidel’s repression of dissent or a plethora of dubious economic decisions ought to be ignored. But history needs perspective. Unrelenting US hostility to the Cuban revolution of 1959 and its aims — which included national sovereignty, an egalitarian division of wealth and an end to racial discrimination — led Havana into Moscow’s arms. Self-sufficiency proved unachievable after the American blockade, and Soviet subsidies helped to sustain a flawed economy, until they dried up with the demise of the Soviet Union.

Fidel was determined not to go the same way. And, almost miraculously, he succeeded in pulling through until the advent of Hugo Chavez, who viewed Fidel as a father figure and proved willing to share Venezuela’s vast natural resources in return for far-reaching Cuban assistance on the healthcare and education fronts.

Throughout his extended tenure, meanwhile, Fidel consistently railed at great length against the depredations of capitalism and the arrogance of imperialism, notably of the American variety, both at home and at global fora such as the United Nations. His formidably wide-ranging grasp of international affairs remained intact well into his post-leadership phase, which effectively began 10 years ago.

His stature is secure among the transformational revolutionary socialist leaders of the 20th century, from Vladimir Lenin and Mao Zedong to Ho Chi Minh. Unlike any of them, though, his cadaver thankfully won’t greet tourists to Havana. Fidel was cremated shortly after his death. His indefatigable spirit, though, may well be influencing humanity decades, and perhaps even centuries, hence.