Hate speech, based on suspicion, violence and hostility between religious communities, is directly antithetical to Gandhiji’s core beliefs 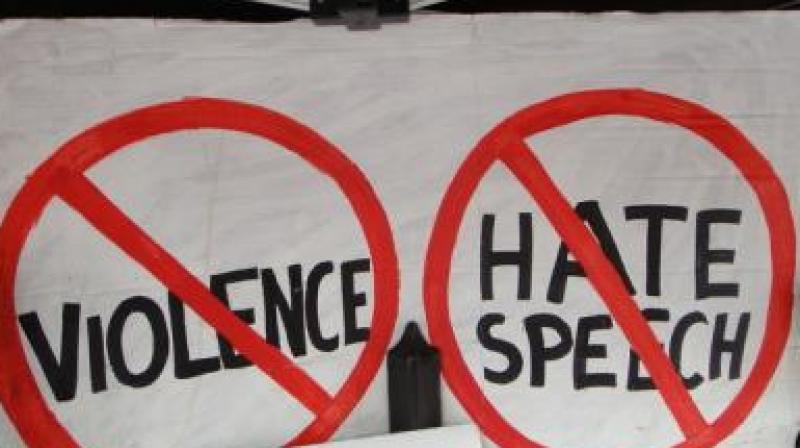 Few can question that the amount of hatred that is spewed on prime-time TV under the garb of “debate”, is uncivilised, undemocratic and an incitement to violence. (Photo | Flickr - John S. Quarterman)

On Mahatma Gandhi’s birth anniversary, it is customary to pay tribute to him at especially organised ‘official’ functions. Yet, how much of his legacy do we actually internalise?  The bhajans he loved are a fixed feature of these annual rituals. Do we remember what their essential message is? For a man, who could sing, Ishwar Allah tero naam, do we stop to think how dramatically this clarion call is being vitiated today?

Narratives are not written in stone. Some modifications, even correctives, are necessary to allow new narratives to emerge. What we need to analyze is how much of the old needs to be jettisoned, and what of the new is really desirable. Gandhiji’s message of tolerance, inclusion, respect for all religions, is a narrative that we can only reject or dilute at great peril to the verifiably plural, muti-religious, multi-cultural vibrancy of our nation. India’s civilisational unity has myriads of ways of expression, a vast diversity, humbling and enrichening. The resilience of India’s nationhood is conditional on preserving that diversity in unity.

Hate speech, based on suspicion, violence and hostility between religious communities, is directly antithetical to Gandhiji’s core beliefs. If we genuinely believe in what the Father of Our Nation stood for, we need to resolutely fight it.  But the way to do it requires careful thought. That requires perennial democratic vigilance, something that the Mahatma always believed in.

Few can question that the amount of hatred that is spewed on prime-time TV under the garb of “debate”, is uncivilised, undemocratic and an incitement to violence. Recently, Justices K.M. Joseph and Hrishikesh Roy of the Supreme Court tried valiantly to deal with this issue. The learned bench asked an anguished question: “Why is the government standing as a mute witness to hate speech, treating it as a trivial matter?”  The Court gave a partial diagnosis for this trend by saying: “Hate drives TRPs, drives profit.” It questioned the role of anchors who encouraged such vitriolic face-offs. “Political parties will come and go,” the Justices observed, “but the nation must endure.” Among the possible solutions they considered were guidelines like those laid down in the Vishakha case to prevent sexual harassment in the workplace. “The most important point is where is our nation headed?” the Bench asked. “If it is hate-speech that we are feeding on, where is our nation headed?”

The Supreme Court’s genuine concern on this issue was evident. But an enduring and effective solution cannot be ensured by guidelines, strengthening existing laws, or creating new ones. On the contrary this may only end up in strengthening the State’s predatory powers against those who oppose it, and become a further barrier against the constitutionally guaranteed fundamental right of free speech.

The problem is that hate speech is nowhere precisely defined.  Article 153A of the Indian Penal Code (IPC) says that “promotion of enmity between different groups on grounds of religion, race, place of birth, residence, language, etc., and doing acts prejudicial to maintenance of harmony” is punishable by three years imprisonment. Section 505 of the IPC makes it an offence to make statements of “communal mischief”.  There are similar provisions in the Representation of People’s Act.

But who is to interpret what hate speech is? If this initial power is with the government and its law enforcing agencies, it greatly widens their scope of arbitrary punitive action. We have seen this happen in other laws like the draconian sedition law, and the Unlawful Activities Prevention Act (UAPA). Since 2014, sedition cases have been filed against 405 people, a 28 per cent increase compared to UPA rule.  Of these, 149 cases have been slapped on those who have made “critical” or “derogatory” comments against Prime Minister Modi, and 144 against those who have made such comments against UP chief minister Yogi Adityanath.

If this is the distorted manner in which the State has interpreted the sedition law, what prevents it from doing the same with regard to “guidelines”, or new legal provisions against hate speech? Such malafide partisanship in interpretation could militate against the fundamental right of free speech mandated by Article 19(1a) of the Constitution, which categorically states: “All citizens shall have the right to freedom of speech and expression.” The serious worry is that under the garb of preventing hate speech, the right to freedom of speech and expression could be stifled.

There are other procedural problems. How will such a law be implemented with regard to YouTube and social media? How will it differentiate between mere criticism and hate speech? But ultimately, the reality is that TV is a reflection of the dominant socio-political debate in the nation. This debate is inextricably linked to politics, and the policies of the government. If the government is itself complicit in engendering suspicion and hostility between religious communities for short term political dividends, how long can TV channels, anchors and, even more importantly, corporate media owners oppose this trend? If the political will exists, existing laws on hate speech will suffice. If it does not, new guidelines mandated by the Supreme Court, or new provisions in law, will not work.

The worst of all options would be to have new laws that don’t prove effective in preventing hate speech, yet can be weaponised by the State to curb the sacrosanct freedom of speech and expression.

Ultimately, therefore, we have to go back to the original vision of Mahatma Gandhi, which is to conquer hate. Narratives will clash as nations evolve, but hate should not and must not dictate change.  Equally, genuine democracy and freedom of speech, were the bedrock of Gandhiji’s ideology. Our government needs to ponder over this. If an enabling milieu is created for the proliferation of hate, and laws to curb it are used to stifle freedom of speech, Gandhiji’s unshakeable belief in freedom, love and mutual respect, will fail.  Posterity will judge if we betrayed the Mahatma even as we paid tribute to him every year on his birth anniversary.