A recent study claims that toddlers can recognise popular brands easily, but have trouble identifying common birds or animals! 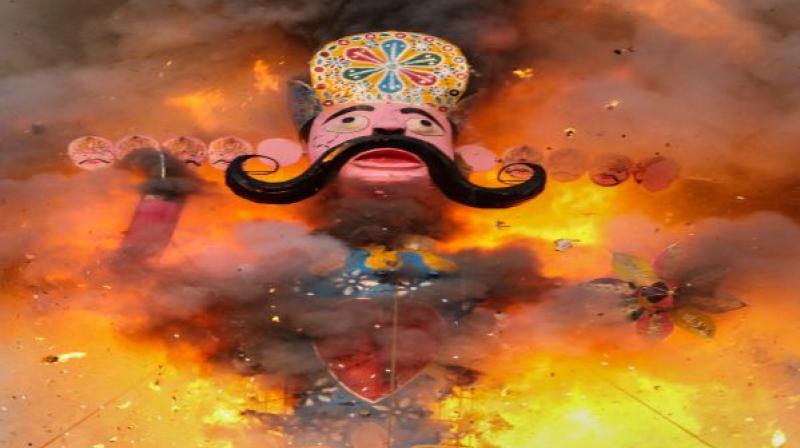 Overall, there is muted euphoria as a roll-up to Dussehra (October 15), and with Diwali to follow. (Photo: Representational)

Take a deep breath. Say it again. Slowly. Like our finance minister, Nirmala Sitharaman, was quoted on the dramatic day the Sensex hit 60K, calmly stating: “I can see very clearly good signs of a revival. Otherwise, my revenue mop up would not be where it is, both in GST and direct tax.” Thank you, Madamji. We desh waasis are feeling good already. The mop up makes the revival sound like puddles of water. Our buckets are leaking, Madamji. But it’s good to know that some of us are getting rich and a few select stocks are creating the illusion that our economy is on fire, and every chhota mota investor has cash coming out of his/her ears. That too, just before the festive season kicks off.

As Arnab Goswami (some of you may remember him) used to ask nightly:

“What’s going on?” The BSE Sensitive Index closed over 60,000 points on Friday last week (September 24) for the first time. I live in Mumbai, and pretty close to the old Bombay Stock Exchange. I did not hear crackers being burst. But then again, all this Sensex talk is just talk for the aam aadmi. To be told that it has risen nearly 60 times in three decades — the benchmark being 999 on January 1, 1991 — does not bring tears of joy to those of us who are coping with far more mundane, everyday issues. How nice… we say vaguely, that the Sensex has more than doubled from its low in March 2020. The poor Sensex had also been Covid-impacted, like the rest of the country. By hitting a new high, we are safely assuming the virus is beating a hasty retreat from India, and the third wave may somehow give us the slip.

Till such time as the lovely lady at WHO (Dr Soumya Swaminathan, its chief scientist) declares it as an “endemic” and we can thump our chests and boast: “See! We did it!” Our dashing Prime Minister is already in that zone! Take a look at his pictures in America, with his flowing beard neatly trimmed. Do you really think the timing of the beard trim was accidental? Nope! Modiji is the master at imaging. His non-verbal communication is as impressive as his oratory. The American press wallahs were quick to note the change in his appearance. His unruly locks are gone along with the extended unshaped beard. Hey! It’s signal, folks! Modiji ki tapasya is finally over. His attempts to look like a sage or an ascetic have been mercifully abandoned. Besides, after the West Bengal debacle, why bother to mimic the great poet Rabindranath Tagore? The voters were not convinced! And hello!! Who created that fake NYT first page?? Any guesses???

Meanwhile, there is enough to feel chuffed about… take a look at the ads across all media platforms. The big sales are on! And consumers are busy splurging money they may not have -- credit cards, zindabad! Live events are happening all across India. Fashion boutiques and jewellery brands are booking full-page ads in the major newspapers. That is, the limited space that is available after Yogi Adityanath has finished with his propaganda. Imagine all the crores of rupees being spent to hang on to his kursi in Uttar Pradesh! The same money could have built a hundred state-of-the-art hospitals!

Our sole Tokyo gold medallist, Neeraj Chopra, is reaping the benefits of his wonderful win, with endorsements galore. Never mind that he was trolled for a rather misjudged attempt (his multiple avatars in an a commercial for CRED), that took away his sheen a bit! But Neeraj is now a mascot for India’s success. Along with our vaccine rollout, which has indeed been praiseworthy. Overall, there is muted euphoria as a roll-up to Dussehra (October 15), and with Diwali to follow. The dark shradh period concludes next week (the night of October 6), and the exuberance of Navratri kicks in across the country. That’s the charm of India! Nothing stops us from celebrating our many festivals -- not even the Covid-19 pandemic.

Compared to this time last year, optimism is definitely in the air, as upbeat citizens make travel plans or think in terms of investments. This year, we actually have options! We won’t feel guilty about dancing during Navratri, for example, or about buying new clothes for the family during Durga Puja. Mithai boxes will pass the scrutiny of those eagle-eyed custodians of our conduct during Covid-19 times. Our bachchalog will once again venture out of their homes, and with any luck… actually play in an open ground with other children! But wait, home schooling has made brand experts of our kids! A recent study claims that toddlers can recognise popular brands easily, but have trouble identifying common birds or animals! This would have been funny had it not been so worrisome! Imagine brands getting embedded in a four-year-old’s mind even before the child can correctly say “E for Elephant”! All is not lost, however, since this study has led to a review of online teaching with an appeal to aim for a balance between the virtual and real. Kids effortlessly identified the logos of food brands, cars and delivery apps, but were stumped when shown pictures of parrots or a coconut tree!

Well, folks, that’s how the laddoo crumbles these days. Our netas are gearing up for Diwali as only they know how — little packets have started arriving well in advance! In Mumbai, citizens use creativity to express their disgust since nothing else works. An imaginative guy (Swapnil Mahindrakar) hosted an exhibition of photographs featuring our notorious potholes at the Street Art Gallery. “Please ask the state government to be a bit more serious about this — precious lives are being lost,” a bench of Chief Justice Dipankar Datta and Justice Girish Kulkarni of the Bombay high court cautioned advocate general Ashutosh Kumbhakoni. Not sure anybody is listening, since we have far more important issues in Maharashtra to deal with -- our former home minister Anil Deshmukh is still lapata, along with the former Mumbai police commissioner, Param Bir Singh. It is a question of who does what deal with whom and for how much. Khul ja Sim Sim!!