No, gentle reader, the supply of fuel had not been curtailed by the oil-fields of the world being flooded by climate-change tsunamis 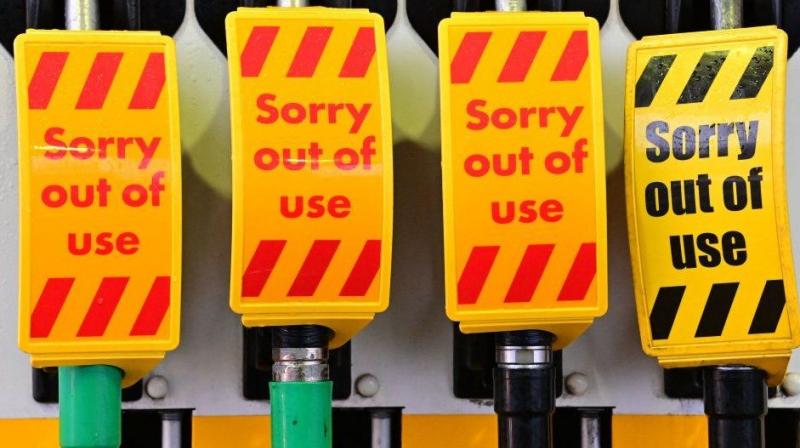 The shortage of fuel to vehicles is not the only acute crisis that Britain is suffering. (AFP Photo)

“Twinkle twinkle little star
I now know precisely what you are
And probably how many light years away
The spectrum shifts of your light will say.
You used to form pictures in the sky
But we now know astrology is a lie
You’re a load of nucleating gas
And the star-struck believer is a deluded ass.”
From Seedy Seedy Bath, by Bachchoo

Zeno’s paradox states that however much faster Achilles can run, he can never overtake the tortoise if he gives him a handicap. The moral can be summed up as: “Don’t conceitedly believe in your ability to win.”

The British xenophobe’s paradox, not in the imagined race of those two, but in brute economic and social reality, is now in relentless progress. It also has a moral: “Don’t wish for what you want -- it may come to pass!”

In the past week all over the UK, cars, trucks and motorcycles formed untenable queues outside petrol pumps, where people waited for six or more hours only to be turned away when the fuel ran dry. Fights broke out with people accusing each other, at knife point in some cases, of attempting to jump the queue. Drivers in these queues were recorded on TV crying because they couldn’t get their loved ones to some urgent appointment such as life-saving treatment in a hospital. Thousands of essential workers such as doctors and firemen couldn’t drive to where they were required.

No, gentle reader, the supply of fuel had not been curtailed by the oil-fields of the world being flooded by climate-change tsunamis. Neither is there a war in which Britain’s planes and tanks absorbed all available fuel. (Did that end with the flight from Afghanistan?). The crisis in fuel supplies at the pumps is caused by a lack of Heavy Goods Vehicle (HGV) drivers in the UK. These drivers, trained and tested to handle such vehicles, including oil tankers, carry petrol from the fuel reservoirs to the petrol stations and so to pumps and hence to my Nissan Note.
The shortage of fuel to vehicles is not the only acute crisis that Britain is suffering. The chief of a leading supermarket chain says that the supplies of certain foods that need transportation to their thousands of outlets can’t get there. It will mean shelves or shop-freezers devoid of certain items. He attributed this problem to the shortage of HGV drivers, in his case not those driving tankers but frozen foodstuffs.

So why has this suddenly happened? The Covid-19 pandemic that lasted over 18 months had of course restricted the movement of vehicles on the road to an extent. But now the chickens are, so to speak, coming home to roost -- and though I know this means that the consequences of an action or event are now being felt, I’ve never understood the analogy or allegory. Were the chickens originally scared away from the roost? Were they denied visas to stay within it and fled to where they were welcome?

I can’t answer that, but I can tell you that Britain is 100,000 HGV drivers short of its requirements. For the decades before the last year, these vacancies behind the wheels of HGVs were filled with skilled and tested drivers from the European Union countries who, under EU law, could freely enter Britain and drive fuel to pumps, food to the supermarkets and perform a hundred different essential tasks which will in time undoubtedly manifest as being left undone. And however much the transport secretary and others in the present government seek to lay the blame on low wages, on Covid-19 and on anything except on their advocacy of and victory with Brexit, the real cause of all this is Brexit.

Transport secretary Grant Shapps appeared on television to say that the EU has an even greater shortage of HGV drivers. He quoted a figure of 123,000 -- that’s more than Britain’s shortage of 100,000. What he did not venture to say was that the EU’s shortage applied across 27 countries and that of the UK only to itself. On a quick calculation -- the problem in the UK is 1,200 per cent worse.

And that’s only the first worst manifestation that the British public, who voted 51 per cent to 49 per cent to leave the European Union and deny those HGV drivers the right to work here, will suffer.

Britain used to rely for decades on immigrants from the EU to harvest fruit and vegetables. Now several of these orchards and crops will, according to farmers, in large measure be left unharvested to rot. That will push up the prices of the ones that are picked and sold. That means cost inflation now and more to come.
Then there is the shortage of nurses, doctors and healthcare workers who constituted, before Brexit, a sizeable proportion of hospital staff. They and the workers in hotels and restaurants have gone back to their countries in large numbers and left an acute shortage in these institutions and industries.

The government now says it will offer temporary visas to HGV drivers from the Continent. If I were one of those, why would I give up my permanent job in Germany or Hungary to come on a short-term visa to help BoJo and Grant Shapps out of their unpopular predicament?

Yes, I know schadenfreude is an ungenerous and mean emotion. I won’t be driving much and won’t buy strawberries, but yes, as a Remainer, I will have a little gloat.