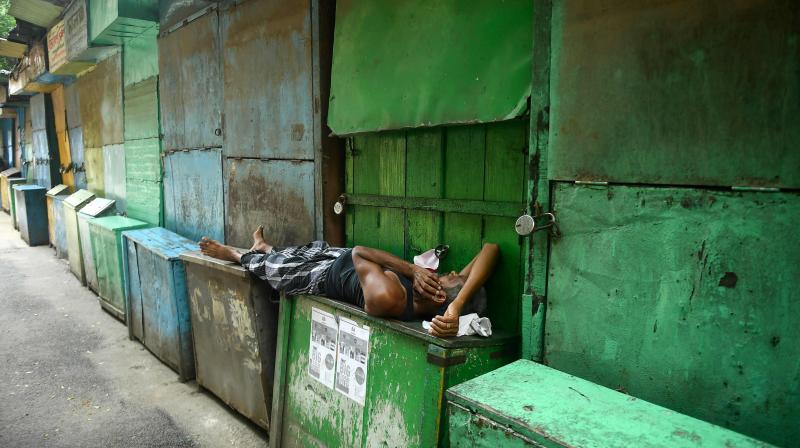 A man rests in front of closed book stalls during a day long state-imposed lockdown as a preventive measure against the surge in Covid-19 coronavirus cases, in Kolkata. AFP Photo

Speaking at the London Business School recently, former Reserve Bank governor Raghuram Rajan warned that the global economy was “slowly slipping” into the Great Depression-like problems of the 1930s and that central banks must sit together and define the new “rules of the game” to find better solutions.

Dr Rajan, who was earlier IMF’s chief economist, was one of the few to have predicted the 2007-08 financial crisis.

The essential problem we must confront is how to rectify a world economic system that has gone hopelessly wrong and resembles nothing like what was envisaged in early 1940s. To understand the situation we are in, imagine living on an island as a part of a small group, in which people are assigned specific vocations and tasks.

In this system one person makes clothes, another shoes, someone pots and pans, someone grows food and someone else prints money to facilitate the exchange of goods and services. The shoemaker exchanges his goods with another for money which he uses to pay for food or whatever.

Almost all these reserves are held by individual countries in the form of bonds, mostly earning very small or even zero interest rates. This is like money deposited in a bank, but it’s really money lent to the issuing country.

As the reserves are mostly in US dollars and euros, the issuing countries have little reason to hold much of them as reserves. The total US reserves are about $132 billion. Contrast this to India’s $535 billion (including $35 billion in gold) and China’s $3,300 billion.

The purpose of sharing these three world economy snapshots is to offer a general backdrop on how we have come to this pass. A situation where the rest of the world invests in the US, so that it can splurge on itself. When it’s short, it can just print more dollars, which the rest of us lap up quite happily.

Every time the US goes into convulsions due to its innate profligacy and economic mismanagement, the world economies go into a tailspin as the US is the world’s biggest importer and it’s where the world keeps its money. Now let’s turn to how the system actually works.

Countries like China and India produce goods and services at low cost for consumption in the US, which in turn pays them in dollars, that they deposit in American banks. Since money can’t sit still, this money in then lent to Americans, who today have the highest per capita indebtedness in the world, to splurge on houses, cars, flatscreen TVs and computers, that mostly they can often ill-afford.

In effect, the rest of the world is plying the US with cheap credit, encouraging it to splurge even more. But there is no global regulator to caution the US on its profligacy or force it to mend its ways.

At the July 1944 Breton Woods Conference, in the last phase of World War II, Lord Keynes had in mind an elaborate scheme that called for the establishment of an international reserve currency called “bancor”, administered by a global central bank.

But this had to be shelved in the face of American obduracy. This central bank would be vested with the possibility of creating money and with the authority to take action to ensure balanced trade. As outlined by Keynes, countries with payment surpluses should increase imports from the deficit countries, thereby ensuring foreign trade equilibrium.

But the United States, as a likely net exporter and creditor nation, and eager to take on the role of the world's economic powerhouse, thwarted the Keynes plan. The American delegates seemed more concerned about inflationary pressures in the post-war economy.

Its delegate, Harry Dexter White, argued that an imbalance was a problem only of the deficit country. White’s determined obduracy is now under a cloud after he was unmasked as a Soviet spy. Did he scuttle “bancor” at Moscow’s insistence to ensure the crisis we now are living through?

The international system was unilaterally abrogated in 1971 when US President Nixon delinked the dollar from the gold standard. In the absence of a standard and a useful regulatory function for the IMF, the great private banks were given a licence to run amok. We now reap the bitter harvest.

With the US dollar as the world’s preferred currency, the US and its profligate citizens have an apparently endless access to easy credit to satiate their sundry appetites. Ironically, the ever-rising annual US trade deficit is the de facto engine of growth for many economies, like China, the Asean countries and even India.