Sunil Gatade
The writer is a senior journalist based in New Delhi.

Delhi is known as a “mini-India”. A vote here therefore has much significance 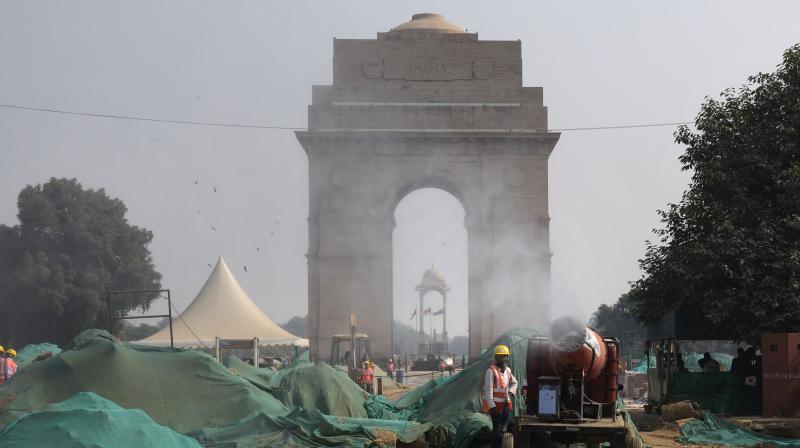 It shows the way that the wind is blowing. When the Lok Sabha polls are just 16 months away, the importance is bound to be much more. (Representational Image/AP)

Civic polls are not necessarily local affairs. It is certainly not if the election is for the national capital. Delhi is known as a “mini-India”. A vote here therefore has much significance.

It shows the way that the wind is blowing. When the Lok Sabha polls are just 16 months away, the importance is bound to be much more.

The polls have become all the more intense as they are being held almost simultaneously with the Assembly elections in Gujarat, the home turf of Prime Minister Narendra Modi and home minister Amit Shah. The ruling BJP, the AAP and the Congress are the principal rivals in both these polls. Every vote counts.

The polls in Delhi, including those of the Assembly, have a bearing on the elections for New Delhi, the seat of power of the Central government. In the last two Lok Sabha polls, the BJP has won all seven seats in Delhi. It had won the last municipal polls massively. The national capital has been one of the strongholds of the BJP since its Jan Sangh days.

But the national capital has been throwing strange signals. The Assembly polls after the 2019 Parliament election saw Arvind Kejriwal’s Aam Aadmi Party for the second time trouncing the BJP without much effort.

Therefore, the municipal polls in Delhi, with an electorate of 1.45 crore, scheduled early next month are being seen with more than curiosity all over the country. The BJP is doing everything to hold on to its territory amid a spirited assault. The Congress had crumbled long ago.

Despite being a civic poll, it has virtually turned into a tussle between Mr Modi and Mr Kejriwal, whose emergence on the political scene of the national capital a decade ago has made things topsy-turvy for established players. Some political observers put it succinctly: Delhi will decide in the polls whether it would be “AAP-nirbhar” or “atma nirbhar”, the PM’s pet phrase to make the country self-reliant.

The Congress has become an also-ran after being in power for 15 long years under the late Sheila Dikshit.

The BJP could get some latitude in the battle if the Congress resists and reclaims some ground.

The BJP has been bossing over MCD affairs for the past 15 years and had a spectacular showing in the 2017 polls, the first after the emergence of the AAP. However, the BJP has now started feeling the heat, and anti-incumbency is catching up. The AAP has won almost all civic byelections in the last five years. Mr Kejriwal is also the new kid on the political block in Gujarat. He is fighting his second civic polls in Delhi and has managed to stir up things, forcing the ruling party to go on the offensive. Reports claim that despite it being a civic poll, the BJP has brought party workers from other states to reach out to Delhites from their regions, noting its pan-India character.

Notwithstanding the BJP’s propaganda that the AAP is resorting to “hollow claims”, Mr Kejriwal has made a dent in the ruling side. He is claiming that the MCD has been a laggard on issues like education and waste disposal. “Why are mountains of dirt in the national capital?”, is a question that has no easy answers. The landfills are overflowing. The BJP’s counter is that the Delhi government had starved the civic body of funds.

The decision to scrap the three municipal corporations and turn them back into a unified body is a masterstroke by the BJP to set civic things right. The move earlier this year enthused local party workers. They feel it will be a game-changer as it has sprung a surprise on Mr Kejriwal, who sees the national capital as his fiefdom. Civic employees are also happy as they feel they will get their salaries on time.

For rival parties, everything is fair in war and politics. The BJP has left no stone unturned to throw dirt on Mr Kejriwal and his colleagues. The AAP has gone to the extent of alleging the BJP wants to kill the CM.

Mr Kejriwal fears the BJP IS playing a deep game to marginalise him. If the BJP retains the MCD, it could use the mayor of the unified MCD to reduce the chief minister’s clout on key issues concerning the national capital. That is why his appeal to the voter is for a “double engine” effect: “Kejriwal’s government, Kejriwal’s councillor”.

In a way, both Mr Modi and Mr Kejriwal are challenging each other on their respective turfs -- in Delhi and Gujarat. Mr Kejriwal’s persistence in continuing his aggressive campaign in Gujarat despite the Delhi polls shows how high the stakes are for the rival parties. The battle is for 2024.

An upset for the BJP in Delhi will be ominous for the party, especially if it’s coupled with a good showing by the AAP in Gujarat. Mr Kejriwal may be hoping for the moon in Gujarat, but he’ll be content with the number two slot after giving a fright to the BJP. Such an eventuality will make him relegate the Congress to the third spot, a tall order indeed. He will be ready to declare that he is the chosen one to take on Mr Modi in the next Lok Sabha polls.