Longpi Pottery has gained popularity in countries like Australia, Sweden, Germany and the United States. 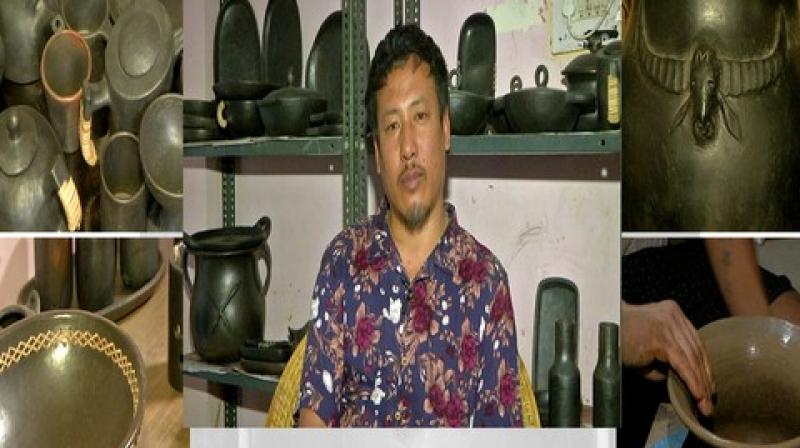 Longpi pottery is made from a mixed paste of ground black serpentine stone and special brown clay, which is found only in Longpi village. (Photo: ANI)

Imphal: The Manipur-based indigenous Longpi Hampai pottery has started gaining prominence in the international markets owing to its intricate designs and technology used to produce them.

To promote the presence of the Longpi Hampai pottery across the country Mathew Sasa a resident of Longpi Khullen started an outlet named Mathew Sasa Craft at New Delhi in 2007.

The outlet has represented the Manipur pottery art at the annual International Trade Fair, National Handloom and Handicrafts Exposition organised in the capital.

Due to his efforts, Longpi Pottery has gained popularity not only in the country but also attained admirers from countries like Australia, Sweden, Germany and the United States.

The ancient art has originated from two Longpi villages in Manipur namely Longpi Khullen and Longpi Kajui near Ukhrul district. It is mainly practised by Tangkhul community residing in the hill district of Manipur.

Longpi pottery is made from a mixed paste of ground black serpentine stone and special brown clay, which is found only in Longpi village. The pots are manually shaped, polished and sun-dried, potters collect the products and heat it in a bonfire which takes a total of six days to be completed.

Sasa said to be engaged in the art of pottery since 25 years along with his father.

"I used to help out my father Machihan Sasa after school and since then I got interested in making the pottery and I realized that God has given me the talent in art. Since then, I have been learning the art and have produced various pottery designs and art" Sasa told ANI.

He further informed that his father had received National Awards Certificate in 1988 and Shilp Awards in 2008 by Ministry of Textiles as a recognition and acknowledgement for his contribution towards art and craft.

Under the flagship of Mathew Sasa Craft, so far around 40 to 50 youth from the region have been trained on Longpi pottery and currently, the organization is providing employment opportunities to seven school drop-out youth from the community.