King of Playboy empire no more 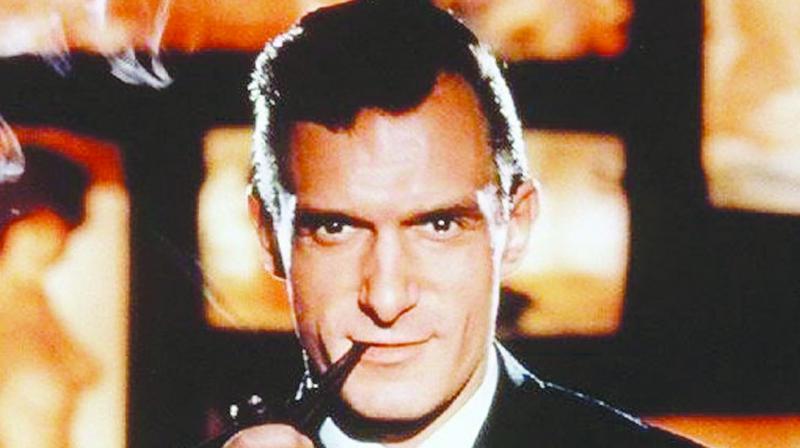 Los Angeles: Hugh Hefner, the silk pajama-wearing founder of Playboy who helped escort nudity into the American mainstream, died on Wednesday, the company announced. He was 91 years old.

Hefner, father of the trailblasing brand that encouraged a loosening of sexual strictures, died of natural causes in his Los Angeles home — the famed Playboy Mansion — according to a statement from Playboy Enterprises.

The consummate playboy outlived both the sexual revolution he fought for as well as some of the famous buxom pin-ups who graced his groundbreaking magazine’s centrefold.

A self-proclaimed master of marketing, Hefner’s skill for self-promotion made it impossible to untangle his image from his empire.

“My father lived an exceptional and impactful life as a media and cultural pioneer and a leading voice behind some of the most significant social and cultural movements of our time in advocating free speech, civil rights and sexual freedom,” his son Cooper Hefner, Playboy Enterprise’s chief creative officer, said in a statement.

Playboy shattered taboos in the 1950s — a time when Hollywood sets featured separate beds for married couples — with bare-breasted pictures in a mass-market magazine whose inaugural centrefold featured a nude Marilyn Monroe.

Born in Chicago on April 9, 1926 to conservative Protestant parents, Hefner has said he retreated into movies to escape his affectionless daily life.

He married classmate Mildred Williams in 1949, a union that would last 10 years. They had two children, Christie and David.

After being struck by fears that he would end up following his parents’ zipped-up lifestyle, Hefner — who had worked in jobs ranging from assistant personnel manager to promotion copywriter at Esquire magazine — decided to take dramatic action and start his own magazine in 1953.

“When I saw that skirt lengths were going down instead of up and that, instead of a celebration after World War II, we were getting repression and conservatism, I knew that wasn’t progress,” he said.

The magazine, recognisable worldwide for its voluptuous covergirls and its emblematic rabbit logo, became a sensation not long after hitting newsstands. Playboy’s circulation peaked in 1972 at seven million, and served as a catalyst for even bawdier publications like Hustler and Penthouse.

Beyond the glossy itself the Playboy brand spawned a heady business empire that included a television series as well as the notorious Playboy Clubs, the first of which opened in Chicago in 1960.

The clubs’ scantily clad waitresses — known as Bunnies — sported bunny ears and strapless corset teddies, with fluffy cottontails pinned to their derrieres. Unsurprisingly the Playboy brand amassed critics, from those scandalised by its daring debauchery to many others who lambasted what they called the objectification of women.

Perhaps the most noteworthy critique of the world Hefner built came from feminist Gloria Steinem. At 28 years old, she found fame after publishing an expose in Show magazine about her experience as an undercover Bunny, depicting a life of low pay, long hours, painful costumes and vulgar customers.

Yet Hefner maintained the “Playboy Philosophy” included advocating for freedom of speech in addition to civil and reproductive rights, which he insisted played to the advantage of women as well as men.

“Women are the main beneficiaries of getting rid of hypocritical old notions about sex,” he told People Magazine in 1985.

In July 1989 Hefner wed Kimberley Conrad — the 1989 Playmate of the Year, then 27 — and had two more children, Marston and Cooper. The couple divorced in 2010. He is survived by his third wife, Crystal Harris, 31, whom he married in 2012.Well past retirement age Hefner continued to take an active role in the editorial side of his magazine, choosing covers and Playmates each month.

Late into his life he also frequented nightclubs and maintained a bevy of young girlfriends, a lifestyle — along with the occasional dose of Viagra — he credited with keeping him young both in and out of the bedroom.

Though he could not cite a definitive number, he assured Esquire in 2013 he was “sure” he had slept with “over a thousand” women.

Kim Kardashian West, who posed for Playboy in 2007, wrote a Twitter tribute to the late mogul, posting: “RIP to the legendary Hugh Hefner! I’m so honoured to have been a part of the Playboy team! You will be greatly missed! Love you Hef! Xoxo.”

Socialite heiress Paris Hilton posted a montage of photos featuring her and Hefner, calling him a “#Legend, innovator & one of a kind”.

“Hugh Hefner was a strong supporter of the civil rights movement,” tweeted activist Jesse Jackson. “We shall never forget him.”

In 2003, Hefner told AFP he “would like to be remembered as somebody who had a positive impact on the changing social sexual values of his time”.

“And I think that position is pretty well secured,” he added.