The latest chapter was billed to have the most action and bloodshed after two consecutive slogging. 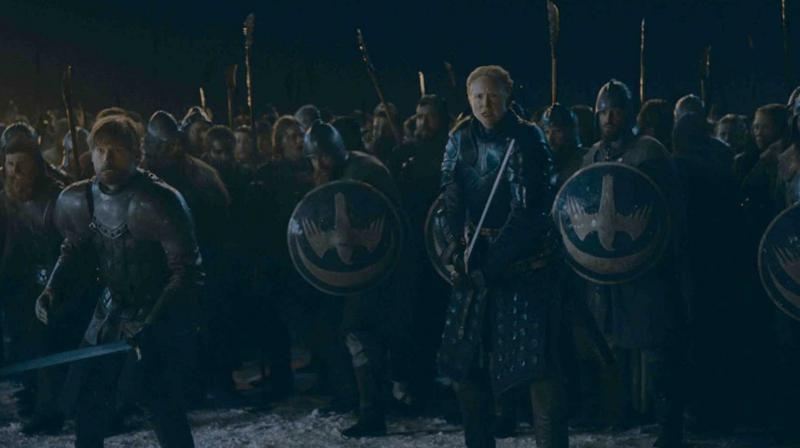 A still from Game of Thrones Season 8 Episode 3. (Photo: HBO)

Mumbai: Indian fans woke up Monday morning to witness 'The Long Night' in "Game of Thrones", which promised a gory battle at Winterfell between the armies of the living and dead, and found the third episode of the hit HBO series' final season to be darker than what Melisandre predicted in her visions.

The latest chapter was billed to have the most action and bloodshed after two consecutive slogging, build-up episodes, now that the White Walkers and wights were a stone's throw away from the gates of the northern stronghold and it was every bit that. So, imagine the plight of fans unable to figure out 'who died how?' and 'who killed whom?' as the 'Great War' was being fought in abysmally dim lighting. Majority of the battle takes place at night, so the low light makes sense, but fans complained on social media that even with raging fires all around the castle, they struggled to see the action clearly. "#Winterfell is dark as f**k! #GameofThrones," a user wrote on Twitter.

"Let's play a game called 'Am I sitting in the dark or watching The Battle of Winterfell' #gameofthrones #got," one wrote.

Some Good Samaritans made light of the situation and asked fellow viewers to adjust the brightness setting of the screens before they start watching the show. "Public service announcement: Adjust the brightness on your screen. It is dark as f**k during this battle. #GameofThrones," one tweeted. "The entire episode was DARK ASF. But thank God, Melisandre 'increased the brightness' up for us. #GameOfThrones #BattleForWinterfell," wrote another.

Another said it would be difficult to give out spoilers this time as no one was sure what was happening. "GOT spoiler without context. Oh you can't see anything? That's cause the episode was dark af #GameOfThrones," another wrote on the microblogging site.

For a tweeple, the episode, which boasts to be the biggest battle sequence in TV history, was the "most frustrating" one. "#BattleOfWinterfell #GameOfThrones is the most frustrating episode so far. I CAN'T SEE SH*T. IT'S SO F**KING DARK," the user wrote.

Another complained, "Me squinting trying to see this dark a** battle #gameofthrones." According to Insider, Robert McLachlan, a cinematographer who worked on eight "GOT" episodes, said the show is dark because they want to keep the show as "naturalistic" as possible. The team wanted "to make these sets and locations feel as if they're absolutely not lit by us, but only by Mother Nature or some candles," adding so that it feels "more naturalistic, albeit enhanced in some cases".

A user, however, pointed out that "GOT" was a "fantasy" show, which had dragons and zombies as part of its plot. "'Game of Thrones' is so dark because they want the lighting to be realistic but considering the show has DRAGONS and ZOMBIES is that REALLY NECESSARY," read the tweet.