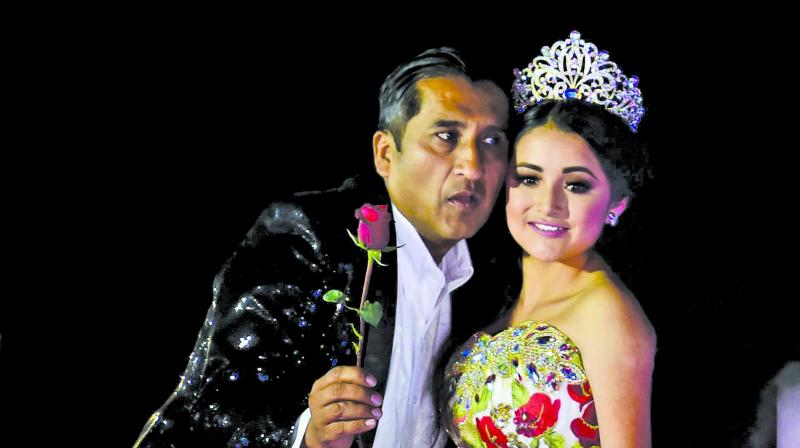 San Luis Potosi, Mexico:  A huge crowd turned out on Monday to celebrate the 15th birthday of Rubi Ibarra, a small-town Mexican girl — though it was fewer than the 1.3 million people who said they were coming after the invitation went viral online.

Girls’ 15th birthday parties are often a huge affair in Latin America, when families pull out all the stops to welcome them to womanhood. But Rubi’s “quinceanera” party took the phenomenon to a whole new level, after the invite became an offbeat Internet sensation. “We found out through social media and we said ‘Let’s go. Everyone is invited? Let’s go,” said Tania Rodriguez, who travelled five hours by car to attend the party held in a large field in Villa de Guadalupe, in San Luis Potosi state. “With all the coverage on her, Rubi felt like part of the family,” added her husband Gonzalo Torres, before heading off in search of “more beer.”

About 10,000 partygoers of all ages came to see Rubi, who danced the night away in a bejewelled floral princess gown with a dramatic red skirt. The teen was the centre of attention on a rock concert-style stage set up in the field, as journalists jostled to capture her every move. Evening featured fireworks, a banquet sponsored by a food company and a concert broadcast on a giant screen.

Rubi danced with friends, as well as the men of her family, receiving a rose from each, in keeping with tradition. “Hi, how’s it going? We would like to invite you this December 26 to our daughter Rubi Ibarra Garcia’s 15th birthday party in La Joya,” her dad, Crescencio, said in a video invitation that went viral.

Dressed in a cowboy hat typical of northern Mexico, he ticked off the names of the bands that would play at the party and announced a horse race with a 10,000-peso prize (about $500), as his wife and the now-famous Rubi stood at his side. “Everyone” is invited, he said. About 1.3 million Facebook users replied that they would attend the party originally set to be in La Joya, a village of 200 people near the city of San Luis Potosi. “This all got out of control,” Crescencio said in one of the many media interviews he has since been asked to give. “That doesn’t mean we didn’t want to invite everyone, of course, but here our parties are regional... This is something we weren’t expecting.”

Rubi fielded numerous interviews herself, becoming a national sensation with her dark hair, cute smile and braces. An airline turned the commotion into free publicity, offering discount tickets to get to the party. And a video game has emerged in which a teenage girl runs down a red carpet, tossing invitations to all and sundry.

The family said they were originally expecting around 800 people for the party. Local authorities moved it to the large field and sent a security detail for what Mexican media were calling “the party of the year.” Tragedy marred the horse race that took place earlier in the day. “Two people entered the track and were hit by the horses... One of them died and the other was hospitalised with a broken leg,” the state of San Luis de Potosi in a statement.