Every day for 98 days straight, the women sent out a distress call to no avail. 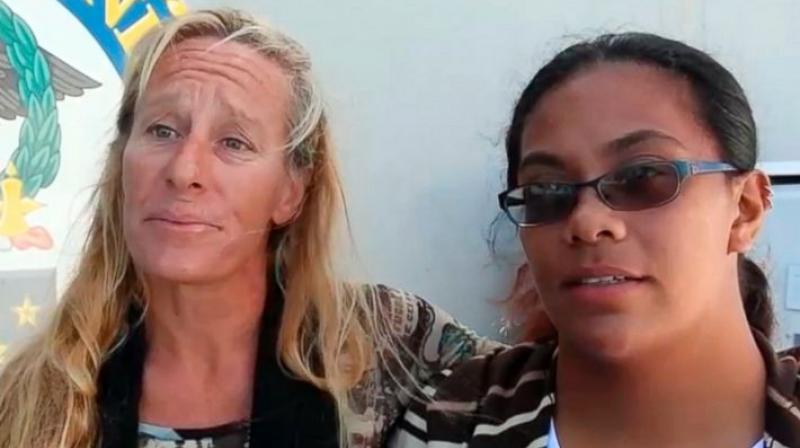 The planned voyage from Hawaii to Tahiti aboard a 50-foot sailboat didn’t start off well for Jennifer Appel and Tasha Fuiava and then it got worse. (Photo: AP)

Honolulu: The planned voyage from Hawaii to Tahiti aboard a 50-foot sailboat didn’t start off well for two Honolulu women. One of their cellphones was washed overboard and sank to the bottom on their first day at sea.

From there, things got worse. Much worse.

About a month into their trip, flooding from a storm crippled their engine. The 57-foot mast was damaged. And then, as they drifted thousands of miles in what turned out to be a five-month ordeal out in the middle of Pacific, the water purifier conked out and sharks started bumping the boat menacingly.

Every day for 98 days straight, the women sent out a distress call to no avail.

But the two sailors, accompanied by their dogs, were resourceful and well-prepared with more than a year’s worth of food, and on Wednesday they were finally rescued by the US Navy about 900 miles off Japan and thousands of miles from their destination.

“Thank God we’ve been rescued,” Jennifer Appel, 48, told reporters in a teleconference arranged aboard a Navy ship. “I had tears in my eyes. It was incredibly emotional.”

The USS Ashland picked up Appel and Tasha Fuiava after a Taiwanese fishing vessel spotted their crippled vessel Tuesday and alerted the Coast Guard.

In photos and video provided by the Navy, one of the women blew kisses as a rescue boat approached. Both women, and their dogs, Valentine and Zeus, looked fit and vigorous. Fuiava flashed a smile as she climbed a ladder onto the Ashland.

Asked if they ever thought they might not survive, Appel said they would not be human if they did not. She credited the two dogs with keeping their spirits up.

“There is a true humility to wondering if today is your last day, if tonight is your last night,” Appel said.

The two women lost their engine in bad weather in late May but believed they could still reach Tahiti by sail. But the damage to their mast made it difficult to make any progress.

“They were horrific,” Appel said.

A group of five tiger sharks 20 to 30 feet long decided to use the sailboat to teach two younger sharks how to hunt, attacking the vessel at night. The next morning, one 20-footer that Appel called “a really poor loser” returned and attacked the side of the boat.

“We were just incredibly lucky that our hull was strong enough to withstand the onslaught,” Appel said.

But the experience wasn’t all the stuff that nightmares are made of. They said they enjoyed learning about the ocean, its features and the weather. “We got to figure out how the ocean works,” Appel said.

“You may as well use the time you have to do something beneficial,” said Fuiava

Appel’s mother said she never gave up hope her daughter would be found.

“She is very resourceful and she’s curious, and as things break she tries to repair them. She doesn’t sit and wait for the repairman to get there,” said Joyce Appel, 75, who lives in Houston. “So I knew the same thing would be true of the boat.”

The mother said after not hearing from her daughter about a week and a half after the younger woman left Honolulu, she called the Coast Guard.

She said she got a call from her daughter early Thursday more than five months after they had last spoke.

The mother said the pair’s water purifier had stopped working and they were down to their last gallon of water when Jennifer got it fixed.

The Navy said that two months into their trip, well after they were scheduled to arrive in Tahiti, the women began making distress calls, but there were no vessels close and they were too far out to sea for the signals to be detected on land.

“That was incredibly depressing,” Appel said. “And it was very hopeless, but it’s the only thing you can do, so you do what you can with what you have. You have no other choice.”

The women said they also tried without success to hail a number of ships and fired off 10 signal flares.

They told the Navy that they survived because they had packed the water purifier and enough food for a year, mostly dried goods like oatmeal and pasta.

They were given a medical check-up, food and beds aboard the Navy ship, where they will remain until the next port of call, the Navy said.

They said they have no fear of getting back in the water for some more sailing. They said they are hoping another ship rescues their sailboat, which was left adrift, and they would like to fix it and sail it back to Honolulu.

“Well, you got to die sometime,” Appel said. “You may as well be doing something you enjoy when you’re doing it, right?”